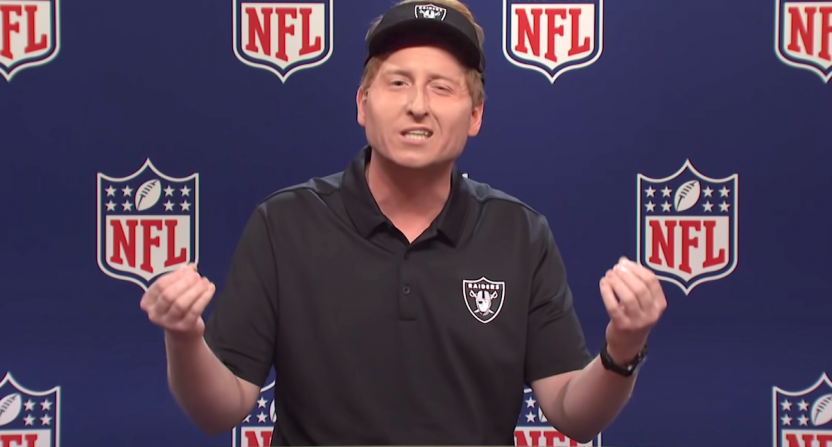 The NFL made headlines in all the wrong ways this past week, breaking into the mainstream news cycle with emails from Jon Gruden containing racist, homophobic, and misogynistic remarks being made public by the Wall Street Journal and New York Times. In light of the scandal, Gruden resigned as Las Vegas Raiders head coach.

Throughout the week, the Gruden story penetrated into regular news and pop culture as a topic on morning news shows and cable talk programs. And the week ended with Saturday Night Live making fun of the NFL’s bad press, using the Gruden scandal and the league’s poor handling of race, gender, and social issues in the show’s spotlight cold-open sketch.

At a press conference intending to show the progress that the NFL has made in the 10 years since Gruden’s emails, commissioner Roger Goodell (played by Colin Jost) acknowledged, “Whenever you see me on TV, it’s never good” and explained that the language in those messages was most offensive to him because of all the insults Gruden directed at him.

Goodell was followed at the podium by Gruden (James Austin Johnson), who continued to insist that he “doesn’t have a racist bone in my body.” For example, “When I referred to an African American player as ‘darker than a night with no stars,’ that wasn’t racial!” And the coach only made it worse from there.

Check out the sketch for yourself:

Others who contributed to the attempt at damage control included Raiders owner Mark Davis (Alex Moffat) and his haircut, two Raiders team staffers who were named interim head coach and immediately had to resign, a Washington Football Team cheerleader (Heidi Gardner) who was named the NFL’s new Chairman of Women’s Relations, and Colin Kaepernick (Chris Redd) in full “I told you so” mode.

SNL‘s cold open is often the show’s best sketch, and this one got better and funnier as it went on, building toward a payoff that sharply commented on Twitter culture and the masses rallying behind a popular choice for another celebrated job opening in pop culture. Mark Davis’s final choice for the new Raiders coach will surely make everyone happy. (Forgive the vague description, but we’re trying not to give away the joke here.)

At the very least, this Gruden sketch was a vast improvement over SNL‘s attempt to spoof the NFL and Fox in the Season 47 premiere a couple of weeks ago.

The NFL surely wants this past week to be forgotten as soon as possible. But if more emails from the league’s investigation into sexual misconduct in the Washington Football Team’s organization become public, and possibly provides more material for Saturday Night Live, that isn’t likely.