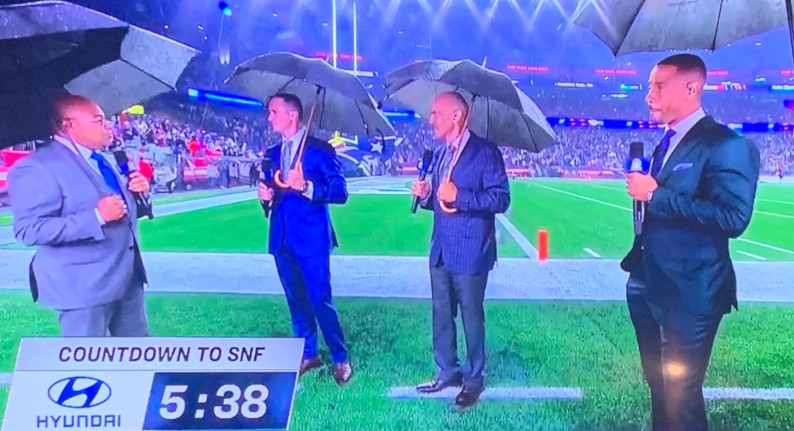 Sending pre-game shows on location for a seemingly-significant event is certainly a relatively-common thing at this point, but outside of ESPN’s College GameDay and Fox’s Big Noon Kickoff, there isn’t often a ton of talk about the on-location decision. That includes Sunday’s “special on-site edition” of NBC’s Football Night In America, which took place ahead of their highly-anticipated Tampa Bay Buccaneers-New England Patriots Sunday Night Football game. But the rainy weather there did lead to one very funny visual; having the panelists “on location” on the sideline rather than in their usual comfortable studio meant rain was a factor, and while Mike Tirico, Drew Brees, and Tony Dungy all held their own umbrellas, Rodney Harrison had someone off shot holding his. Here’s a clip of how this looked, from AA’s Ben Koo on Clippit:

That led to a lot of Twitter discussion; here’s some of that.

Shoutout to the person getting paid to be Rodney Harrison’s Fonzworth Bentley pic.twitter.com/WAoJrLu1DE

Shoutout to @Rodney_Harrison for being the only guy with a personal umbrella holder. pic.twitter.com/L47NjCE0NU

Rodney Harrison is not contractually obligated to hold his own umbrella. pic.twitter.com/fqbJ3Is2Ke

I guess @Rodney_Harrison too good too hold his own umbrella. Must be better than the two Hall of Famers next to him pic.twitter.com/M99K3RlU4C

Of course, while much of the world saw this as special treatment for Harrison versus the other panelists, it isn’t 100 percent confirmed that that’s the case. Some of this may be about how the shot was set up; you can’t have an off-screen umbrella holder for central panelists (unless they duck behind them, and even then, there’s a good chance of that looking weird), and Harrison seems closer to the edge of the shot than Tirico does on the other side. So it’s certainly possible that it wasn’t Harrison making the call on someone holding the umbrella for him. At any rate, whether Harrison requested that or not, it definitely drew a lot of comment.

[Ben Koo on Clippit; photo from Awful Announcing on Twitter]