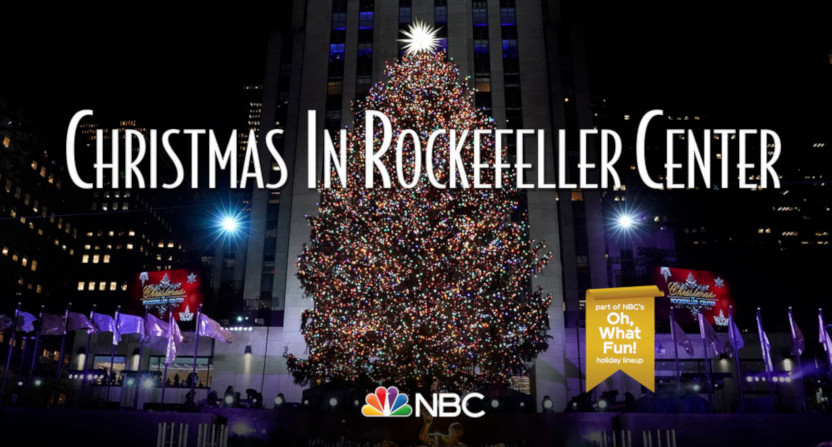 The Baltimore Ravens-Pittsburgh Steelers game getting moved to Wednesday (the third separate move for that game) was interesting enough in its own right, but what particularly surprised many was that it’s airing at 3:40 p.m. Eastern. While this strange year has seen some moved games starting around 5 p.m. Eastern on weekdays, those have been games shifted to Monday, and they’re airing early to not compete (for long at least) with Monday Night Football. A 3:40 p.m. ET start for a game on a day with no other NFL action seemed odd to many, but there’s a reason for that: NBC’s annual Christmas In Rockefeller Center special, which they’ve been promoting for weeks (including on Thanksgiving parade coverage) and which they couldn’t easily move. Here’s more on that from Andrew Marchand of The New York Post:

To add to Schefter's report on 3:40 start, according to a source, NBC couldn't move tree lighting this close to Weds. The lighting is an expensive production and advertisers love it so Steelers-Ravens are in the afternoon.

Of course, there’s been a lot of “really, tree lighting?” from the sports world, including from Schefter in that tweet and in a NFL Live appearance. And yes, Ravens-Steelers in primetime would presumably be a better draw in terms of total viewers; last week’s lowest NFL audience was 12.612 million viewers for Monday Night Football (still quite a solid audience for that title), while the Rockefeller Center special drew 7 million live+same day viewers in 2018 (the first year it went to two hours from one) and 6.9 million live+same day viewers last year (rising to 7.26 in live+7). But Marchand’s point about advertisers is a valid one; there are a lot of companies who have bought specifically for that special, and who would be highly against it being moved. And moving it may have been quite difficult given the lineup of performers specifically booked for Wednesday night:

And as per John Ourand of Sports Business Journal, NBC was willing to move the tree lighting to cable or taped if the NFL made them, but the NFL didn’t force them to:

Multiple sources tell me that NBC was prepared to move the tree lighting ceremony to one of its cable channels or, possibly, carry a taped version on NBC the next day. The NFL brings higher ratings than anything else on TV, and faced with an either/or choice, NBC would have picked an NFL game featuring, arguably, the league’s best rivalry in the last decade over a tree lighting ceremony that drew 6.9 million viewers last year.

The league did not put NBC in a position where it had to make that choice. Media sources said that the league has recognized the amount that it has asked broadcasters to be flexible for during the 2020 season, which has included dueling Monday night games and a Tuesday night game. Usually known for playing hardball — even with its partners — the NFL decided against pressing the issue.

Yes, NBC is going to take a substantial ad revenue loss from this game not airing on Thanksgiving as originally planned and drawing that always-large holiday audience. And yes, they’re going to get lower ratings from a Wednesday afternoon game than they would for a Wednesday evening game. (Although, if there ever was a good year to air a weekday afternoon game, a year with many people working from home is definitely it.) But it absolutely makes some financial sense for NBC to not mess with their already-booked, already-promoted primetime special, even for the NFL. (And hey, now they get a nice NFL lead-in for it.)

And that’s especially true for a NFL game that still carries some uncertainty; after all, it’s already been moved three times. And yes, NBC could possibly have put the NFL game in primetime on NBCSN, but there are all sorts of complications when it comes to putting NFL games on cable. And cable still comes with a much lower reach than broadcast TV, especially for any channel other than ESPN. There’s no guarantee that that move would have been possible, or that it would have been better.

In a lot of ways, this move is really an encapsulation of the flawed situation the NFL and its broadcast partners are finding themselves in at the moment. There’s a lot of incentive to get these games played someway, somehow. But team-wide outbreaks like what happened with the Ravens necessitate changes to the plan, and with the season in its latter stages, there aren’t any further bye weeks to reschedule games for. (It’s absolutely possible to argue that the NFL should have expected this and should have left some vacant weeks at the end of the year before the playoffs and the Super Bowl, but they didn’t.) And because of the interconnectedness of the NFL’s schedule, some options are tough to make work. Yes, the league and NBC could theoretically have played this game Thursday, especially with no Thursday Night Football scheduled, (and who knows, maybe they’ll reschedule for that day shortly), but that would lead to further bumping back of the Ravens’ and Steelers’ next games (both already bumped from Sunday to Monday).

All in all, it’s understandable why the parties involved have made the decisions they have. Playing this game Tuesday would have been tough given how things have developed with the Ravens. (Heck, playing it Wednesday still may be tough.) Moving it to Wednesday, and not Thursday, makes sense for the NFL. And with that game being on Wednesday, it makes some sense for NBC to say “Yeah, we’ll air that in the afternoon and stick with our planned evening Christmas special,” even if that’s not ideal for many NFL fans.

[NBC Universal photo from 2019, via WNYPapers]