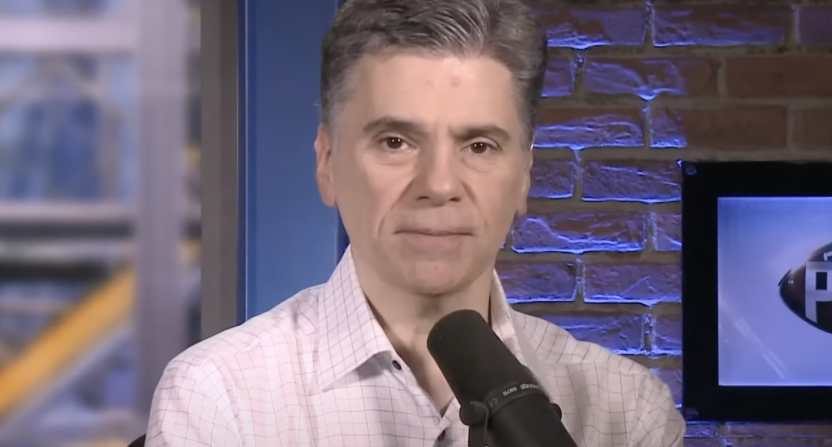 As someone who runs the popular NFL news website, Profootballtalk.com, you might think that Mike Florio loves the NFL Draft, which starts Thursday night.

Florio, a former labor lawyer, staunchly believes that players entering the workforce should be free to choose their place of employment—just like any other profession. Florio made the argument in Playmakers: How the NFL Really Works (And Doesn’t). In Part I of his book, Florio has a chapter titled: At Its Core, The Draft Is Anti-American.

He wrote: “The draft reflects Anti-American values. It restrains movement and flexibility and the inherent realities of self-determination. It forces men not long removed from being boys to move to places they otherwise would never choose to live, often hundreds if not thousands of miles from the places they’d prefer to start their professional lives.”

Yes, Florio is well-aware of the ever-increasing popularity of the draft. It has become its own cottage industry with many websites (including ProFootballTalk.com) and experts dedicated to that coverage. Mel Kiper Jr. has built a million-dollar-empire off draft analysis.

Florio explained his stance in an interview with Awful Announcing.

The two most high-profile examples of players pushing back against the NFL Draft are John Elway and Eli Manning. They were able to do so because they were consensus No.1 overall picks, they were quarterbacks, and they had leverage that most don’t have.

Elway was the first pick in the 1983 draft by the Baltimore Colts. He had no desire to go there and threatened to play baseball for the New York Yankees. He was dealt to the Denver Broncos, where he led them to two Super Bowl championships.

Manning was the first pick in the 2004 draft by the San Diego Chargers. He had no desire to go there and threatened to never suit up for them. He could do that as a member of the powerful Manning family. He was dealt to the New York Giants where he also led his team to two Super Bowl titles.

Worth revisiting that draft: Giants were going to take Ben if they couldn't trade for Eli. Rivers would've been a Steeler.

How different the NFL would be…pic.twitter.com/mtqmd0M8QV

Elway and Manning are outliers. While some wondered if Joe Burrow would pull a similar power play in 2020, he joined the Cincinnati Bengals. But as a record-setting Heisman Trophy winner and national champion, he was in an ideal position to buck the establishment.

You can call the draft un-American, however, it is legal. That’s due to the collective bargaining agreement (CBA) between the NFL and the NFL Players Association. Both sides agreed to these conditions.

And Florio, by his own admission, has a bias. He practiced law for 18 years and was a labor attorney for 10, representing individuals against large companies.

“If you take away the union, it’s a blatant antitrust violation,” Florio said. “It’s no different than in a given community a kid gets a job after school. You have Burger King, McDonald’s, Subway, Taco Bell, and Arby’s, and they decide who is going to get dibs on which kid.”

Of course, many will dismiss Florio’s concerns. The NFL Draft is the ultimate reality TV show, drawing in huge ratings. Plus, the NFL argues that the draft is necessary for competitive balance. However, that is not why all four major sports leagues (MLB, NFL, NBA, and NHL) have drafts.

Drafts exist primarily to control player costs. When an individual is selected, there is a certain amount of money he can expect to earn depending on where he is taken. In a free-market system, an individual could take the best offer from any team which would likely drive up salaries.

That’s the way it usually works for most people entering the workforce. But not in sports. Plus, for the NFL, the draft has the added bonus of being its marquee offseason event. There is so much attention and hype paid to the NFL Draft that it generates millions in revenue for the league.

Never mind that roughly half the first-round picks don’t succeed.

Florio will continue to object to the draft, even though many people aren’t listening.

“I’ll still make those arguments,” he said. “Sometimes you just have to peel the curtain back and show people this is really how it’s happening. Maybe there are some issues people should be concerned about, even if they’re not.”