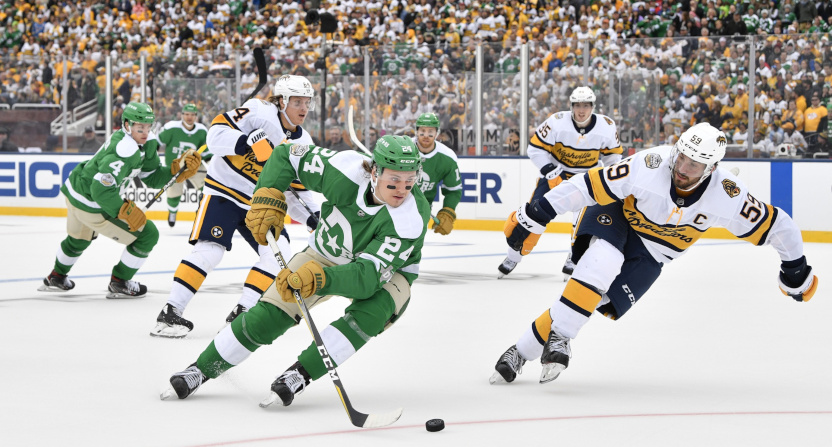 The NHL’s annual New Year’s Day Winter Classic outdoor game went to an unusual venue this year; the Cotton Bowl in Dallas, where the host Stars took on the Nashville Predators. But that didn’t lead to much ratings success; as Sports Business Journal‘s Austin Karp noted Friday, the game (which saw its broadcast begin at 1 p.m. Eastern on NBC Wednesday) drew the lowest audience ever for a Winter Classic.

The Citrus Bowl is certainly notable competition, as that was ABC’s most-watched college football postseason game of any sort since the 2010 national championship. But that wasn’t the only factor here. As Paulsen writes at Sports Media Watch, there were actually less viewers watching college football (counting the Citrus Bowl on ABC and the Minnesota-Auburn Outback Bowl on ESPN) instead of the Winter Classic this year than there were last year (which featured a Mississippi State-Iowa Outback Bowl matchup on ESPN2, a LSU-UCF Fiesta Bowl matchup on ESPN, and a Kentucky-Penn State Citrus Bowl matchup on ABC):

Wednesday’s Predators-Stars NHL Winter Classic averaged a 1.15 rating and 1.96 million viewers on NBC, marking the lowest rating and viewership in the history of the game (dates back to 2008).

It should be noted that the game started 40 minutes later than usual at 2 PM ET. NBC’s ratings were measured from 1 PM, meaning that the numbers include an hour of pregame coverage.

While the competing Citrus Bowl was up 82% on ABC (to 14.00M) and the Outback Bowl up 22% on ESPN (to 3.99M), the college football competition was actually less than last year, when there were three competing games. The combined audience of 17.99 million trailed last year’s mark of 19.44 million for the Citrus, Outback and Fiesta bowl games.

That extended amount of pregame coverage probably played a role in the lower overall Winter Classic rating here, as it may have caused some people to flip away to live college football or to not tune in at all until the puck actually dropped. And the teams involved may not have helped either; a Sports Business Journal analysis of the U.S. teams’ local ratings last year had Dallas with the third-biggest local ratings drop for their Fox Sports Southwest broadcasts (down 28 percent to a 0.5 on average; that was still above the bottom five overall teams, but not by much), while data for Nashville wasn’t available. (Nashville did do well nationally in their 2017 run to the Stanley Cup Final, though.)

However, the teams involved aren’t everything. The previous lowest-rated Winter Classic came in 2018 with the Buffalo Sabres (who often lead the local ratings, albeit in a small market where a ratings point doesn’t account for as many viewers) and the New York Rangers (who play in the biggest U.S. market and have usually put up decent ratings). And there have also been some arguments that the league has featured certain teams too much in the Winter Classic, especially the Chicago Blackhawks (four times) and Boston Bruins (three times); a lower viewership number this year for some less-prominent teams may still help overall in promoting the league as a whole. And both local markets drew pretty well, with Nashville posting a 5.1 and Dallas a 4.3. Also, a lower viewership number isn’t as bad when you consider the extended pregame coverage; that made for a longer “broadcast” here, allowing for more ad sales.

The larger discussion here is about the trend for the Winter Classic. The game has generally drawn fewer and fewer viewers in the past few years, albeit with an uptick last year for Bruins-Blackhawks at Notre Dame Stadium. And the 1.96 million viewers this year is just 44.5 percent of the 4.4 million the game drew in 2014, and 56.5 percent of the 3.47 million it drew in 2015. However, 1.96 million viewers is still a notable number, and it’s far better than any other NHL regular-season content; Paulsen notes that this number beats every indoor regular-season number for the NHL since the start of the lockout-shortened 2013 season. So this is probably still worth doing for the NHL and NBC, even if the numbers are well below what they’ve been at some points.