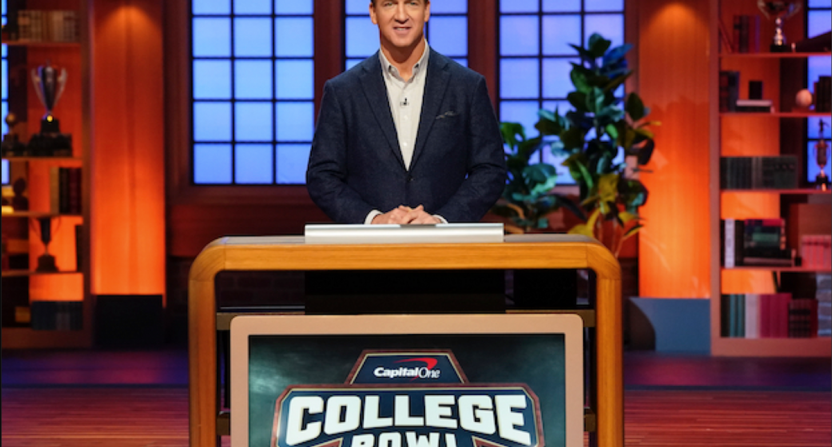 It’s been another offseason of Peyton Manning not taking an analyst position in an NFL broadcasting booth, but that doesn’t mean he’s not adding television responsibilities.

In November, news came that Manning would be hosting a revived version of the classic College Bowl quiz show, a television mainstay for decades. Now, thanks to an NBC announcement, we have some more details, including that it’s only a few months away.

We also know that Peyton isn’t the only Manning brother involved. Via Variety:

Football great Peyton Manning will host the program, which aired on radio stations in the 1950s before moving to CBS and then NBC between 1959 and 1970, and will be assisted by his brother, Cooper Manning.  In each show, teams of three representing some of the nation’s top schools must work together to answer questions on a wide variety of subjects. The top two schools advance to the final, where they compete head-to-head for the Capital One College Bowl trophy and a scholarship to put toward their education. Participating schools include University of Alabama, Auburn University, Columbia University, University of Michigan, University of Minnesota, Ole Miss, Morehouse College, University of Tennessee, University of Southern California, UCLA, University of Virginia and Xavier of Louisiana.

In addition to Cooper’s role, Eli Manning is on board as an executive producer. The Capital One sponsorship makes sense from a brand/synergy/advertising dollar perspective (if you’re into that kind of thing); the company spends a ton of cash every year to basically be a main presenting sponsor for multiple college football events/shows. Considering the Manning’s involvement and the interscholastic competition of College Bowl, the parallels are obvious.

Back in November, here’s what NBC said about the format:

The series will pit teams of college students head-to-head in a battle of scholarships and the title of “College Bowl” champions. Twelve selected schools will compete in a bracketed tournament over four rounds, in which teams vie for the most points.

“We’re excited to bring this beloved college game show back to primetime with a fresh new spin that is sure to not only entertain but also inspire,” said Jenny Groom, executive vice president of unscripted content at NBCUniversal. “Peyton’s love for competition, sport and education makes him the perfect host and partner. It will be so much fun to showcase these college rivalries and, more importantly, the incredibly smart and talented students behind them.”

Game shows make a lot of sense for networks now, too. They’re often cheaper than scripted programming, and the collegiate nature here could find a built-in audience. Manning’s turn as a host will come on the heels of Aaron Rodgers hosting two weeks of Jeopardy!; his stint wraps up this week, and he’s been very good hosting a show with a format much more difficult on the host than College Bowl will likely be.

It’s also worth noting that while College Bowl the televised competition hasn’t been on the air for fifty years, there have still been College Bowl competitions annually. (Contestants often graduate to become the kinds of people who take trivia nights at bars very, very seriously. I’m not judging, as I’m one of them.)