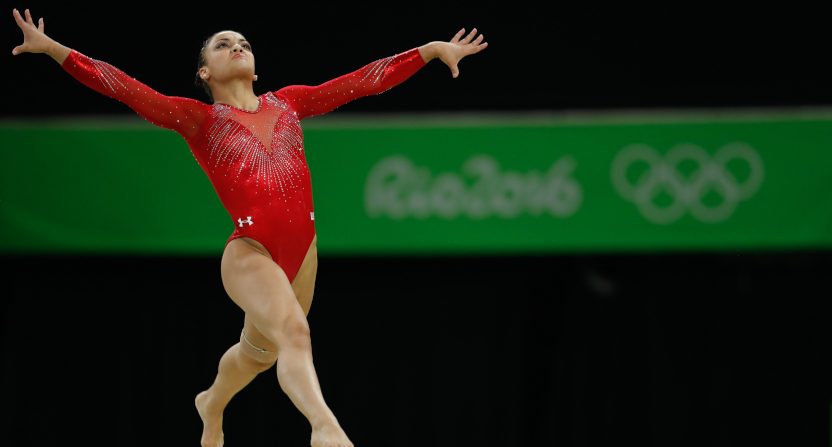 With the 2021 Olympics now less than 100 days away (and facing a lot of questions along the way), both NBC and Telemundo have started to roll out some details on their coverage plans. One different platform for NBC’s coverage this year is NBCUniversal streaming service Peacock, and while the full details on what Olympic content will be available on Peacock aren’t yet spelled out, we do know of a couple of docuseries heading to the platform.

Back in February, Deadline broke the news of a three-part Michael Phelps docuseries coming to Peacock, with that series featuring Phelps, Rowdy Gaines and Dan Hicks looking back at Phelps’ career and rewatching some of his most famous races. And now, on Monday, Peacock announced an upcoming six-part docuseries Golden: The Journey of USA’s Elite Gymnasts in partnership with Uninterrupted. It will cover four top U.S. Olympic team hopefuls: Laurie Hernandez (seen above competing in the 2016 Rio Olympics), Morgan Hurd, Sunisa Lee, Konnor McClain, and MyKayla Skinner. Here’s more on that from a NBC release:

Partnering with UNINTERRUPTED and as part of its countdown to Tokyo programming, Peacock has ordered a six-episode docuseries following top American gymnasts—Olympic gold medalist Laurie Hernandez, Morgan Hurd, Sunisa Lee, Konnor McClain, and MyKayla Skinner—as they compete for the four coveted Team USA roster spots in the Olympic team competition. The series will follow these athletes, whose preparation for the Games was fundamentally altered by the pandemic, over a five-month period as they continue their grueling training regimens and fight for a chance to compete in the Tokyo Olympics.

Each hour-long episode of Golden will center on the individual and intertwining journeys of Team USA hopefuls leading up to the Tokyo Olympics. Hernandez won gold as a member of the “Final Five” team and an individual silver on beam in Rio. Skinner served as an alternate on that team. Morgan Hurd, the 2017 world all-around champion; Sunisa Lee, a member of the team that won gold at the 2019 World Championships; and Konnor McClain, the 2019 U.S. Classic Junior All-Around Champion who became age-eligible for the Tokyo Olympics once the Games were postponed, will also star in the series.

…Three-time Olympian Dominique Dawes will serve as executive producer along with LeBron James, Maverick Carter, Jamal Henderson and Philip Byron from UNINTERRUPTED. Katy Murakami is showrunning the docuseries with Harrison Macks and JP Stiles, who will serve as directors and executive producers. Camille Maratchi is a Co-EP. The series is produced by UNINTERRUPTED, a division of The SpringHill Company, the global consumer and entertainment brand created to empower greatness in every individual builtby LeBron James and Maverick Carter. “When I look back, I remember the tremendous sacrifice it took me to achieve my own Olympic pursuits,” said Dawes. “Similarly, these gymnasts have and will continue to endure physical, emotional and mental hurdles that most cannot fathom. The millions of viewers who watch the Summer Games are accustomed to witnessing the short-lived glory of the podium without truly understanding the demands these young female athletes face.”

The series will focus on various milestones along the way to the Tokyo Games, from National Team training camps to the U.S. Gymnastics Championships to the U.S. Olympic Team Trials (which begin June 24). Each episode will be focused mostly on one or two of the individual gymnasts mentioned, but will check in on the others as well. And Dawes’ involvement here is certainly notable considering her own 10-year career with the U.S. national team, which saw her take part in three Olympics (and help the U.S. to team gold in 1992). Meanwhile, showrunner Murakami has a solid resume as a producer, working on everything from The Titan Games to World’s Toughest Race: Eco-Challenge Fiji to Kevin Hart: Don’t F**k This Up and Uninterrupted’s More Than An Athlete.

It’s interesting to see this particular format used again for a gymnastics series, as the Olympic Channel did the All Around series in 2019 following Hurd, Angelina Melnikova (Russia), and Chen Yile (China) for a year, in conjunction with London’s Noah Media Group.  But these kinds of docuseries closely following an athlete or athletes and releasing episodes soon after the events in question have become pretty common recently, including another gymnastics one (Religion of Sports’ Simone vs. Herself). And there’s certainly an appeal for Peacock to feature one focused on contenders for the U.S. women’s gymnastic team, as women’s gymnastics often draws a ton of U.S. viewers.

That’s especially true with the U.S. team going for their third-straight Olympic gold this summer. And if this storytelling docuseries focused on some of the top prospects for the team gets some traction, it might boost those numbers even more; NBC has long tried to emphasize storytelling in their Olympic coverage, and this gives them a chance to do so on an associated platform in the lead-up to the Games. We’ll see how Golden does critically and in terms of viewership, but a gymnastics docuseries ahead of the Olympics seems like quite a smart programming bet both for Peacock and for NBCUniversal as a whole.