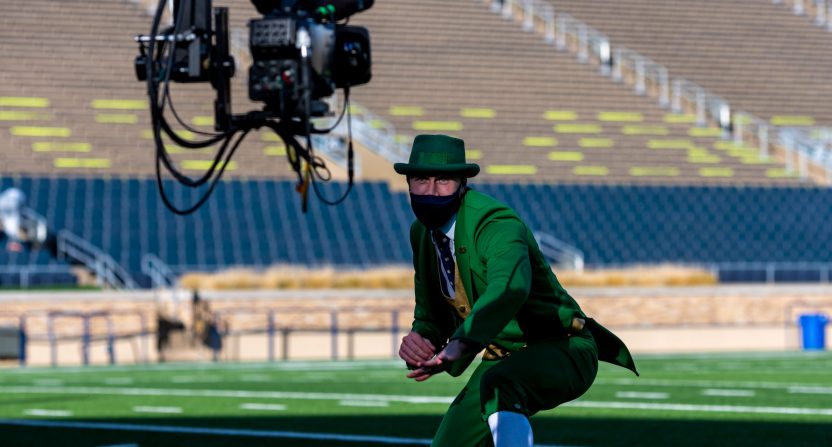 One of the biggest ripple effects of announcing the winner of a U.S. Presidential election on a Saturday is that the subsequent coverage affects all TV programming that was already scheduled for the day, which includes a lot of college football.

While the college football morning shows on ESPN and Fox Sports cut into their coverage to make the initial announcement, we got a preview of what the rest of the day might look like when many ABC affiliates cut away from Texas – West Virginia to show news coverage. ABC pushed the game to ESPNNews to compensate for those unable to watch while some local affiliates cut away from the political coverage as soon as possible to show fans the game they wanted to watch.

We knew that President-elect Joe Biden and Vice-President-elect Kamala Harris would be making speeches this evening, which would almost certainly coincide with college football coverage, including the day’s primetime matchup between the No. 1 Clemson Tigers and No. 4 Notre Dame Fighting Irish. Scheduled to be broadcast on NBC, it seemed inevitable that the broadcast would be pushed or moved to make way for the national news-making event. Even though NBC could just move their political coverage to MSNBC, the first speech since Biden was officially announced as the next President calls for the main channel.

Now it sounds like we know the plan, per Mark Skol of WNDU.

BREAKING: The Notre Dame – Clemson game will move to the USA Network once Joe Biden starts his press conference.

USA will begin simulcasting the game at 7:55 PM.

NBC will not leave the game until Biden steps to the podium.

NBC will be back on the game once the speech is done. pic.twitter.com/Q7U6fJxq9G

Per Skol, NBC’s telecast of the Clemson – Notre Dame game, which is scheduled to kick at 7:30 p.m. Eastern, will begin simulcasting on USA Network at 7:55 p.m. Biden is expected to give his speech beginning at 8:00 p.m., however, NBC will not cut away from the game until the moment Biden is about to begin speaking. They will stay with the speech until it’s over, though it’s unclear if that includes any remarks by Harris or others.

PROGRAM NOTE: Projected President-elect Joe Biden and Vice President-elect Kamala Harris are expected to address the nation at 8pm. NBC will carry that live – moving Clemson-Notre Dame to USA Network during the special report. The game will resume after. @NBC10

At that point, the game broadcast will return to NBC. It’s unclear if the game will continue to be broadcast on USA Network at that point or if viewers will be redirected back to NBC. UPDATE: Per NBC Sports’s announcement, “once NBC News’ coverage of the speech concludes, the game will return to NBC.” It’s a smart idea for all viewers to figure out where USA is on their cable or streaming service now so you’re not left scrambling.

Or, you know, you could watch the President-elect give a speech. But…we know…we know…