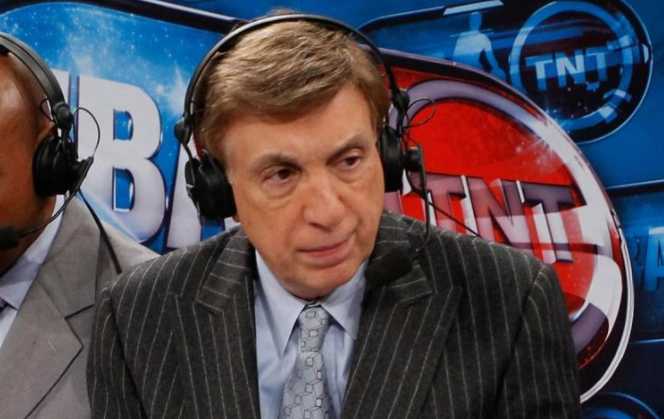 Long before Craig Carton and Ryen Russillo embarrassed themselves publicly, Marv Albert was involved in one of the most surprising scandals in sports media. As bad as the recent Carton and Russillo transgressions are, they don’t approach the lurid and shocking details of the Albert sex trial which happened 20 years ago this month. It was the first major scandal of a non-athlete sports media personality in the modern age. It’s impact still echoes today and sports media has never been quite the same.

The story seemed preposterous: a sportscaster with a famous voice and a famous toupee, biting, cross-dressing, three-way sex. It sounds like an episode of Brockmire, without the comedy. If someone had pitched this story to the National Enquirer, they wouldn’t have believed it. Even two decades later, the scandal is hard to comprehend. It’s even harder to believe that Albert, still working at 76 years old, orchestrated a Hail Mary of a comeback.

More than anything else, the Marv Albert scandal highlighted the evolution of fame.

Fascination with the secret lives of celebrities has existed as long as the rich and famous themselves. The feeding frenzy for inside dirt is particularly heightened for entertainers: actors, musicians, and of course, athletes. But when the growth of sports on television exploded in the 1990s, something changed. Our appetite grew, we wanted more. We also became interested in stories about the people covering entertainers. Who are the people behind the microphones, on camera gathering information on our favorite athletes? This development is relatively new.

The new glitterati enjoy the benefits of mega-media platforms and life-changing salaries. They also are subject to the downside. Your private life is no longer private. Your worst moments are held up for public display for everyone to see and ridicule. The list is long and it will likely keep growing. Over the past month alone, we’ve seen ESPN radio host Ryen Russillo arrested for criminal entry after reportedly being found naked and intoxicated in Wyoming, and WFAN radio’s Craig Carton arrested for allegedly masterminding a multi-million ticket Ponzi scheme. 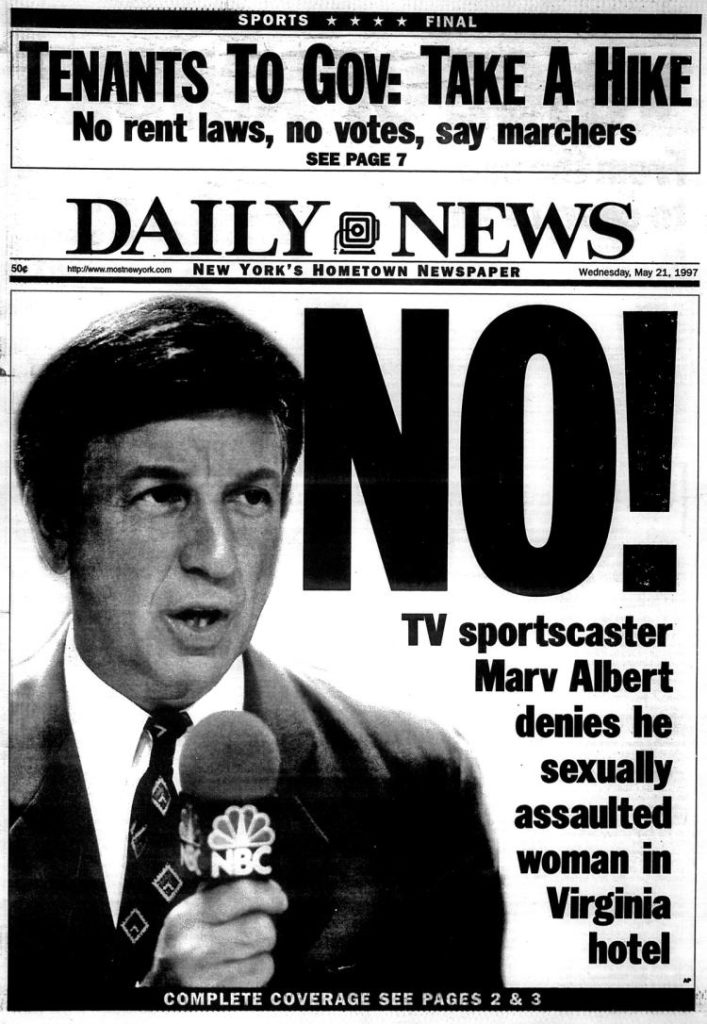 Russillo returned to the airwaves recently after a two-week suspension. Carton is facing a possible 45-year sentence. Daunting, yes. But you can come back from the brink. If anyone has proven that, it’s Albert.

Those Russillo and Carton stories are weird. But perhaps the granddaddy of all sports media scandals occurred in September 1997 when Albert, the longtime voice of the New York Knicks and the NBA, pleaded guilty to a misdemeanor count of assault and battery. The details of the crime were so salacious that it was one of the biggest sports stories of the year.

Prior to the scandal, Albert meticulously built a successful career that was the envy of most in his profession. While he provided play-by-play for multiple sports, he was and is best known for basketball. What Vin Scully was to the Dodgers, Albert was to the Knicks. His voice was immediately recognizable and he turned a simple word like “Yes!” into his catchphrase. You can make the argument that the five-time winner and Basketball Hall of Fame is the sport’s greatest play-by-play announcer.

That wasn’t all. Albert evolved into a pop culture icon in the 1980s, thanks primarily to his many appearances with David Letterman on late-night television. On Letterman’s shows, Albert helped popularize the sports blooper – video clips of funny moments in sports. He called them the Albert Achievement Awards.

These appearances helped turn Albert into one of the most recognizable sports broadcasters in history. Even if you knew nothing about sports, you knew about Marv Albert.

His popularity and likability was why the sex scandal was such a big story. In February 1997, a woman accused Albert of throwing her on a bed in a Virginia hotel, biting her on her back, and forcing her to perform oral sex. He said the act – including the bite – was consensual.

In the competitive tabloid city of New York, this was manna from heaven. Imagine if your 10 most embarrassing Google searches were revealed to the public. That was the Albert scandal in a nutshell. It was like The Maury Povich Show, starring America’s most famous sportscaster.

Some of the tawdry details that emerged before, during and after the trial:

** Accusations that he bit women, including one whom he allegedly asked for three-way sex.

** A story involving a transvestite and a prostitute-dominatrix.

** A woman claimed she escaped only when she ripped off his hairpiece.

As the trial went on, it seemed to get weirder and weirder. Every day, Albert showed up, often accompanied by his fiancée and wearing that ridiculous hair piece. The trial eventually came to a merciful halt. Albert pleaded guilty to misdemeanor assault and battery charges in exchange for dropping a forcible sodomy charge. and was given a 12-month suspension sentence and was ordered to continue his mental-health counseling.

No more job? Also, yes. Albert escaped serious legal trouble but was fired from NBC, a place where he had worked for 20 years. His reputation was in tatters. He was a punch line.

Albert’s career seemed to be over.

Then something amazing happened. Albert built his career back more quickly than anyone would have imagined. In 1998, he was hired by MSG to call Knicks games on the radio. In 1999, he landed a job with TNT as its NBA play-by-play voice. Stunningly, NBC hired Albert back in 2000.

Albert, for all of his failings, is great at what he does. He had enough friends in the media business. He was no longer radioactive. His scandal became yesterday’s news and he was employable again.

Albert continues to work in basketball. Just last year, he and TNT agreed to a multi-year contract extension to continue calling NBA games. He has been associated with the NBA for over 50 years and Turner Sports executive Craig Barry called Albert a “legendary broadcaster” and “a true icon in the industry.”

The fiancée who stood by him is now his wife. He’s still wearing that toupee. And he’s a millionaire. The scandal cost him significant embarrassment. But it could have been much, much worse. Today, the scandal is rarely mentioned, although a Google search of “Marv Albert” will still show you his mug shot.

What can we learn from all this?

Athletes get second chances because of their value. Albert brought shame upon his employers, but he proved to be too valuable to stay jobless for long. You can survive risky, possibly criminal behavior if you’re a big enough celebrity.

Marv Albert did. Looks like Russillo will. Let’s see what the future holds for Carton.