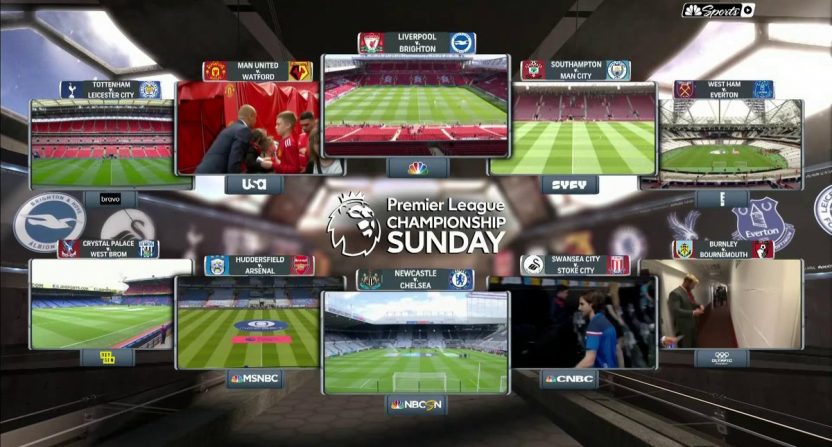 Ever since NBC bought the rights to show the Premier League, they have dedicated themselves to showing all ten games on the final day of the Premier League season. The Premier League, like most soccer leagues around the world, have every game on the final day of the season kick off at the same time in order to avoid anyone having an advantage knowing what they need to do to finish where they want to be. It’s usually an incredibly important day that could bring some intense drama to finish out the season.

Since NBC doesn’t have ten sports networks to put all the games on, they have to outsource their games to the other NBC/Comcast owned networks. That’s why there were games on Syfy, MSNBC, Bravo, E! and Oxygen, among other networks. All but Golf Channel, who previously showed Stanley Cup Playoff hockey, had a Premier League game.

10 matches on 10 networks. Here's where you can find all of today's @premierleague matches ? pic.twitter.com/SKKaUvA72I

This didn’t sit well with the notable viewers looking to start their Mother’s Day Sunday with housewives or the news or a sci-fi movie. In a non-Masters tradition unlike any other, the people took to social media and aired their grievances/confusion about why soccer is on a bunch of non-sports channels.

The most vocal of this group were the people who missed out on MSNBC and AM Joy with Joy Reid along with Meet the Press on NBC. Despite cable news being a thing 24/7, there were still people who had a major problem that soccer took out a couple hours of news time.

Soccer! Instead of #MTP. Jesus Christ #NBC .Watching a Tim Russert rerun. OMG! It's so much better. #hownottorunaNetwork

I’m sorry. I “get” the need for USA to see Premier Soccer but it’s on EVERY channel owned by @nbc #MSNBC #CNBC Can someone please explain? Was this to free everyone up for #MothersDay ?

@OptimumHelp have you been hacked? Premeier League Soccer is on like 15 channels, including NBC. No Meet The Press?

Thought i could watch snapped all morning and enjoy my mother’s day. but nope. @nbc is forcing people to watch soccer ????

It is Sunday morning. Why is NBC & NBC owned stations flooding us with 2 hours of British Premier League soccer. Who cares?

Miss you! My daughter brought me a delicious breakfast in bed of homemade waffles with steaming cup of coffee. I brought it out to watch with am Joy. What's this? Soccer?

Really. . . . REALLY @MSNBC? I turn on to see @amjoyshow and you've got soccer on? There's like 100 sports networks and YOU'RE showing soccer. Where's that 'keep sports out of politics' crowd when I need them? pic.twitter.com/qqQVDkc05u

Just turned off @MSNBC due to soccer. I pay for enough sports channels that I never watch. MSNBC needs to ditch the sports.

My only day to watch @amjoyshow and MSNBC is airing soccer, which I don’t give 2 effs about!

@MSNBC Why do you have soccer on instead of AM Joy? If I wanted to watch soccer I would change to a sports channel! WTF??? ???

@amjoyshow When you’re all set on a Sunday morning to watch @JoyAnnReid on @MSNBC and you find a bunch of soccer players instead. Bummer.

Wait! What? You're showing soccer? Where the hell is #AmJOY @msnbc? Was this an actual we-meant-to-do-this thing or was there nobody around to pinch hit? Did you ask Jonathan Capehart? Even the soccer guy is bummed out. Guess it's Fareed Zakaria this morning. pic.twitter.com/7bGhrJ6EUz

This was a very dumb management decision … not many who watch #AmJoy or #msnbc would be interested in a soccer game. I watch politics, not sports. And if we wanted to, we can watch soccer on a sports channel not a news channel. Know your audience @msnbc https://t.co/hqRtz0Hn2T

@MSNBC WHAT THE F____K IS GOING ON ?This morning the biggest day for political news I expected to turn on AM Joy ,and what do I get SOCCER ???Have you sold out to the Plutocrat Traitor Republicans ( PTR`s )

@MSNBC SOCCER??? SERIOUSLY? I wake up on Saturday and Sunday just to watch AM JOY and you've got a blasted SOCCER game on LIVE? WTH?? With everything going on in our government right now, and YOU HAVE SOCCER? What is WRONG with you? 24 hour news – NOT SOCCER!!

It's a special kind of insult on Mother's Day to wake up for AMJoy only to find it pre-empted for soccer. Soccer. Are you fucking kidding me, @MSNBC all politics all the time? SOCCER??? I'm just gonna barf.

Is anyone else watching @MSNBC? Why are they playing soccer? Where is @JoyAnnReid @amjoyshow Confusing . . . Also #NBC seems to be down, also playing soccer, no commercials

Some people theorized that because it was Mother’s Day, that AM Joy host Joy Reid got the day off and MSNBC showed soccer instead. That’s a nice way to look on the bright side but that was merely a coincidence.

There weren’t as many tweets about the other networks but there were a sizable amount from the Syfy/E!/Bravo/Oxygen crowd. They weren’t at all pleased as well.

I woke up this morning and turned my tv on…there is soccer on the Syfy channel, not like zombie soccer, real premiere league soccer

@SYFY so how the hell does shitty soccer count as Syfy. You are not ESPN. Holy shit we want science fiction not sports.

Nice move, @Syfy : You guys think its a good idea to cancel The Expanse AND fill your Mother's Day with soccer! I bet those sci-fi fans out there are really loving you guys right about now. #SaveTheExpanse

@SYFY programmers: Mother's Day morning and you're televising soccer tournaments?? ??whose bright idea was that??!! #hellolightbulbs ?

@SYFY yo why tf is soccer playing on your channel? And it’s not aliens vs robots? pic.twitter.com/CBQLjRG3Vs

Why is soccer playing on E!

Why is premier league soccer on E?

Pretty dumb of @Bravotv and @e_entertainment to put soccer on both channels for #mothersday2018. The one morning I can watch whatever I want they play the exact thing my husband wants to watch ?

And as it turns out, on Syfy, USA and E!. Someone is really over estimating the lure of English soccer.

WTF? @NBCNews @CNBC @oxygen @telemundo @universo @syfy @Enews all have #PremierLeague soccer for Mothers Day. I call Dingo! @Comcast who owns all the above owes us an extra @amjoyshow as well as regular programming on the other networks as well. #WorstProgrammingDecisionEver

They’re showing a soccer game on @oxygen. No Snapped? No Dateline? This is not the start to Mother’s Day I envisioned.

@oxygen, the new network for crime and premier league soccer. Because the demographics are the same, right? ?

@NBCUniversal @Bravotv @e_entertainment @nbc @oxygen maybe next Mother's Day you guys can NOT play soccer on every channel? Maybe just a simple vanderpump rule marathon? Or some real housewives? Just a thought.

This happens every year and it’s gotten to the point where many soccer fans get a good chuckle about it. No doubt, soccer fans get angry when games are preempted for something else and many act a lot like these people, so it’s not like soccer fans are any better. I guess it’s just amusing for soccer fans to see it happen the other way around once a year.

FYI: This will happen again May 19 next year so if you don’t prefer watching soccer, I recommend planning another activity that morning because NBC is going to do this again.