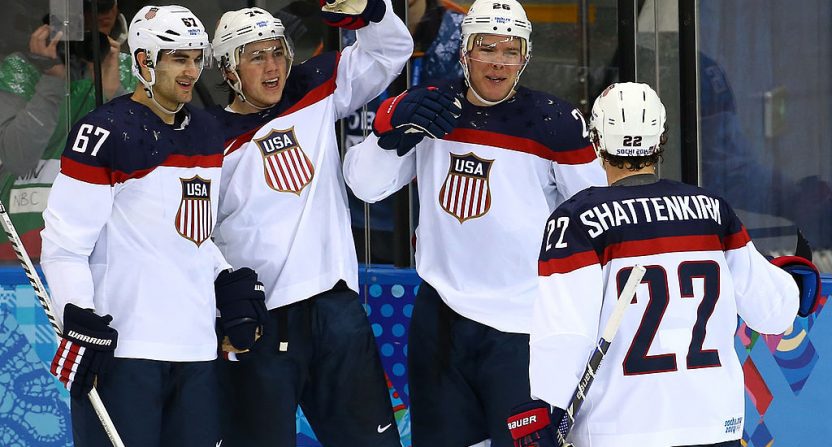 The National Hockey League’s announcement Monday that they won’t interrupt their 2017-18 season for the Pyeongchang Winter Olympics could have significant impacts on TV ratings, both during the Games and afterwards. And those impacts seem like bad news for NBC on a multitude of fronts. As the U.S. broadcaster of both the Olympics and the NHL, NBC seems set to lose out both coming and going.

First, there’s the impact on Olympic ratings. We don’t know exactly how this will play out yet, as some star NHL players (including Russia’s Alex Ovechkin in particular) have said they intend to go to the Olympics with or without the league’s permission, but if the tournament has significantly less NHL stars, that would seem to negatively affect the ratings. And men’s hockey with NHL stars (which has been an Olympic feature since 1998) has long been one of the most marquee events of the Games from a broadcasting perspective; NBC pulled in 27.6 million viewers on average for the Canada-U.S. final in 2010 (the best since 1980), and despite being broadcast in the afternoon, it beat all of their prime-time broadcasts for those Winter Olympics other than the opening ceremonies and the U.S.’ six-medal night. The same gold-medal matchup drew 17.1 million in 2002.

Of course, that was at least partly because of the U.S. making the gold-medal game. The U.S.-Canada semifinal in 2014 averaged only 3.9 million (but it was relegated to NBCSN, and set a record rating for that network; also, the U.S.-Russia game earlier in that tournament on NBCSN averaged 4.1 million, but with a slightly lower rating.) However, Olympic men’s hockey has generally been a strong event for ratings relative to other sports, whether it’s aired on NBC or NBCSN, and that’s especially true if the U.S. makes it to the gold-medal game. It seems unlikely the sport will do as well without NHL stars, although NBC’s statement says they still hope people will watch (but what else could they say, really?):

Of course, the Olympic hockey audience probably isn’t going to entirely disappear if it’s mostly not NHL players competing. That was the case before 1998, and there were some good moments there; in particular, the U.S. semifinal against the post-Soviet Union Unified Team drew 11.7 million in 1992, and that aforementioned 1980 Olympics shone; the Miracle On Ice averaged 34.2 million viewers (on tape-delay), and the subsequent gold-medal game against Finland pulled in 32.8 million. Still, it seems unlikely there can be a storyline to captivate viewers the way the 1980 team did, unless Russia gets all its NHL players and a group of American college kids somehow beats them in Miracle On Ice 2 (2 Miracle 2 Ice?), and it seems probable that the U.S. audience will be smaller without NHL players than it was with them.

This isn’t an utter disaster for the Olympic broadcaster. NBC’s coverage of the Games overall should still do just fine, and it’s worth noting that the most-watched Winter Olympics ever remains Lillehammer 1994 (fueled by the Nancy Kerrigan-Tonya Harding story). However, it does seem likely that their men’s hockey broadcasts won’t draw as well, and that is an important event in the Winter Games. For a network looking to bounce back from disappointing ratings for last year’s Summer Olympics, that’s not great.

The other challenge is how the NHL’s own games will remain relevant during the Olympics. Sure, it will still have games, and probably quite a few of its top players, but where are those games going to be broadcast nationally? NBCSN is the NHL’s usual national broadcaster, and they carry a lot of games (for example, they have live games this Tuesday, Wednesday and Thursday), but they’ve been doing almost round-the-clock Olympic programming during the last several Games, and that’s likely to continue. They’re the main cable destination for NBC’s Olympics coverage, and that coverage tends to do much better than your average NHL game, so it’s unlikely it’s getting bumped. And that’s saying nothing about the Game of the Week on NBC, which almost assuredly is not happening during the Olympics.

NBC Universal does own plenty of other channels, of course, and they’ve used everything from MSNBC to CNBC to USA for NHL playoff coverage before, but those networks are often showing Olympic programming as well during the Games. There are other channels they’ve used for wide-ranging events like the English Premier League’s Championship Sunday, but the idea of the NHL on Oxygen, Bravo or SyFy doesn’t sound all that appealing. And with Olympic competition (from both hockey and other events), NHL broadcasts might pull in less ratings than usual. They normally do okay for NBCSN, but in the middle of the Games on a harder-to-find network? That sounds like a recipe for poor ratings.

What about if this had gone the other way? Well, NHL ratings didn’t see as much of a boost as hoped for in the wake of Olympic ratings like Vancouver’s, and the league used that to argue against putting their schedule on hold to send players this time, but it’s interesting that the NHL itself was talking up boosts from Vancouver back in 2010. Ratings did increase, just by 11 to 17 per cent for NBC broadcasts (and three per cent for NBCSN predecessor Versus broadcasts), not the level some had hoped for. So there were some advantages for the league in having players there (and in not competing against the Olympics for attendance and viewers), and there will be some disadvantages for them in not going.

The more substantial drawbacks may be for NBC, though. They presumably lose out on some Olympic hockey ratings, and they may have to find suboptimal ways to televise the NHL’s ongoing games during that period. This certainly isn’t good news for them.