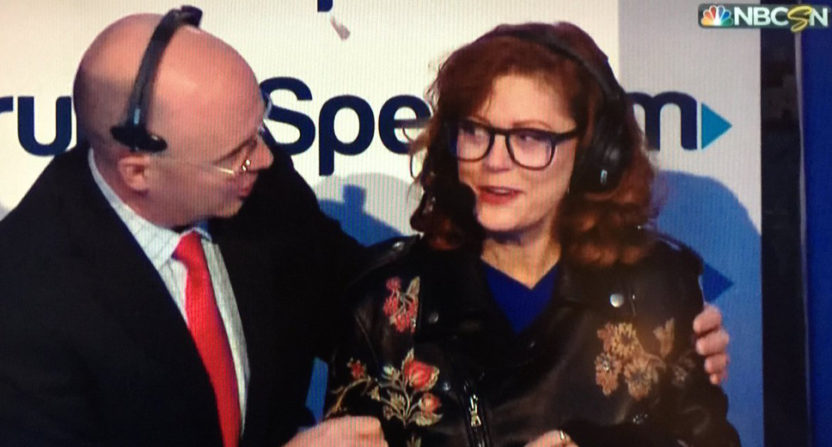 NBC has tried using some guest analysts from well outside the hockey realm on its hockey coverage recently, including NASCAR driver Joey Logano and Philadelphia Eagles’ linebacker Mychal Kendricks. On Wednesday, they repeated that experiment for their Pittsburgh Penguins-New York Rangers game, putting actress Susan Sarandon (a long-time Rangers fan) between the benches with analyst Pierre McGuire for the entire first period. But the reaction from viewers was anything but positive.

First, before we get to the roasting, let’s take a look at the clips. Let’s start with one of Sarandon’s “Oh! Oh! Oh!” reactions to a shot something she did repeatedly.

McGuire then tried to get her to expand a little, which she did by saying “What’s great about hockey is you have to be really strong to get it off the boards, but then you have to have such a nice stickhandling light, light touch.” Are we not doing phrasing any more?

Here’s another “Whoa, oh, oh” reaction to a shot:

Here’s McGuire saying “When you were in Bull Durham, you were really good at working with young players,” (Pierre, the film has her as a groupie sleeping with young players…), then asking Sarandon about trying to recruit Jimmy Vesey on Twitter, with her saying “It’s all about the young guys”:

And Chris Cuthbert then asked her about not-young star goalie Henrik Lundquist, with Sarandon saying “He is an icon, he’s not even in a category, so beautiful, dresses so sharp, and he’s perfect as far as I’m concerned.” Followed by McGuire saying “I think you have a lot of company there” and Sarandon laughing awkwardly:

Oh, and at intermission, they interviewed Sarandon further. Here’s a clip of her comparing this to the Rockettes, and then talking about the Rangers’ rebuild, saying “Young guys are fabulous, and they’re hungry, and they’re foolish”:

She then was asked for her favorite hockey movie, came up with “Slap Shot, is that what it’s called?”, and then had this incredibly awkward exchange with Liam McHugh asking what her reaction would be if the Rangers traded Lundqvist, Sarandon saying “Who?” (she did know Lundqvist previously, so she may have just misheard here, but still), and then saying “I don’t know, I don’t know, but I want you to know, that speaking of, I gave them my Academy Award at one point to keep in the locker room, gave it to [former captain Mark] Messier, to bring them luck, it visited the locker room”:

Here’s some of the viewer reaction to Sarandon overall:

I’m trying to watch a hockey game. An NHL hockey game involving the two-time defending champion late in the regular season.
The very last thing I need is friggin Susan Sarandon telling me anything about it.

Susan Sarandon just said, of the Penguins being a rival with the Rangers, “I guess we’ll know after tonight.”
Because, you know, these teams have never played each other before.

Holy hell, @NBCSN The only thing that might make your experiment even remotely tolerable is if Susan Sarandon were in character as Annie Savoy.

Every time Susan Sarandon says “OH” during the game, take a shot.

Susan Sarandon sounds like me in any conversation that I don’t want to be in and am just humoring them.

Its Pretty Bad when I would rather hear Milbury and McGuire talk then listen to Susan Sarandon….

Henrik Lundqvist has suffered some indignities this season but none worse than having to endure Susan Sarandon doing color commentary at MSG for #PITvsNYR.

If you want to die, take a shot every time Susan Sarandon says "oh" or "whoa" on the NBC broadcast of the Rangers/Penguins game.

Someone make a betting line. Over under how many times does Susan Sarandon say OHHHH OHHHH during the #PITvsNYR game. Let's set it at 100. I'm taking the over

NBC: Don’t think there can be anyone more annoying than Pierre between the bench. Susan Sarandon: Hold my beer #LetsGoPens pic.twitter.com/cosbuZI1Ve

Susan Sarandon is high AF and nobody can blame her. I know I would be if I had to spend 3 hours with Pierre

A live look at Susan Sarandon in the box with Pierre: pic.twitter.com/EEOsvAdINY

Why does it sound like Susan Sarandon is doing a When Harry Met Sally audition in the broadcasters booth. #NBCkeepingitweird #PittsburghVsNewYork #LetsGoPens

Look, it’s understandable that NBC wants to try and promote hockey with some celebrity cameos, but why not just a brief in-booth interview like we often see in baseball or football? Putting Sarandon on the mike for a whole period wasn’t the greatest plan, especially with her mostly offering variations on “Oh, oh, oh.” And a lot of this, that between-periods interview in particular, bordered on Brent Musburger-Eminem levels of uncomfortable.

But hey, if this is all a deep plot to make McGuire and Mike Milbury look better by comparison, congratulations on a job well done, guys.