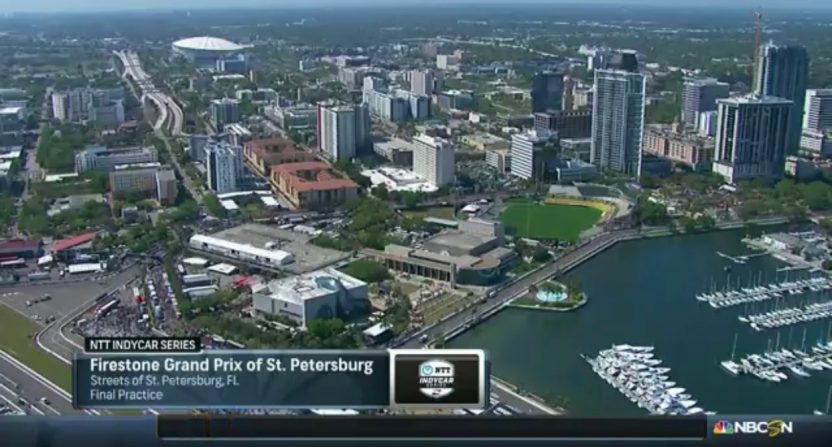 The first half of the Firestone Grand Prix of St. Petersburg was pretty great. Defending Indy 500 winner Will Power and IndyCar rookie Felix Rosenqvist had been trading the lead for the first half of the race and after a round of pit stops, Power got out ahead of Rosenqvist, who exited the pit just short in staying in front. Power overtook Rosenqvist in an incredibly close move.

He and Will Power nearly touch as the Swede comes off pit road. #FirestoneGP #INDYCAR pic.twitter.com/zrLhgVVzGx

Unfortunately, amid all the hype and high hopes for the 2019 NTT IndyCar Series season, NBCSN had a major technical difficulty that resulted in not having visuals for almost 15 minutes. On lap 62, during a split screen commercial break, the race screen cut to black and the picture was lost. NBCSN pivoted and made their commercial full screen and then aired more commercials to try and buy some time in hopes of getting the broadcast back on TV.

Eventually, either because NBCSN knew it was going to be a while and/or because it was getting to a point where viewers were going to notice a lot of commercials being aired at the same time, NBCSN went into an audio-only emergency mode for the broadcast. Play-by-play announcer Leigh Diffey explained that there were “transmission and technical issues” in St. Petersburg and apologized for the inconvenience. With a picture of the city of St. Petersburg and the street circuit as a backdrop, Diffey, Townsend Bell and Paul Tracy went into radio mode to call the race during the outage.

Calling a race on TV and calling a race on radio is two completely different things. For one thing, a radio broadcast has people around the track to do play-by-play with the main task of “painting the picture” because the listener isn’t watching. It’s difficult enough to switch in between the two styles but that degree of difficulty really goes up when technical difficulties force you to change up your broadcasting style and start describing the action as best you can as if you’re on the radio. Under what was likely a hectic situation behind the scenes as well as trying to call the race in a different way, Diffey, Bell and Tracy did a good job considering the circumstances.

On lap 75, NBCSN got everything back and came back from commercial with Josef Newgarden leading.