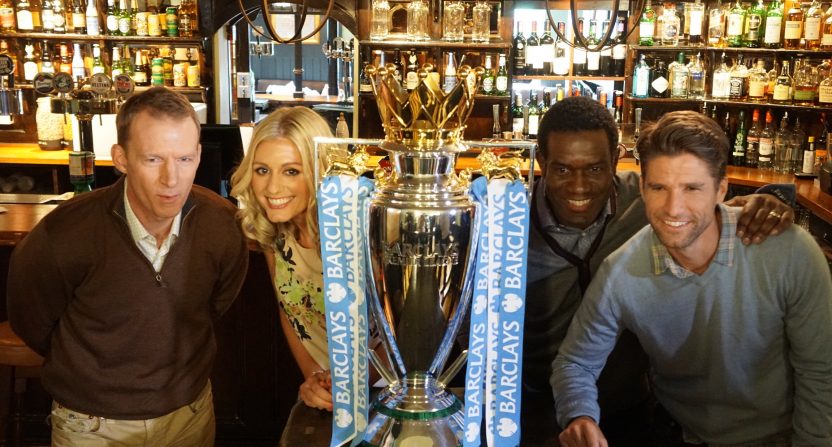 This Easter weekend, the NBC Sports English Premier League studio crew leaves the comfy confines of Connecticut and will be in the United Kingdom for its third annual trip across the Atlantic. Host Rebecca Lowe and her merry band of analysts, Kyle Martino and the Two Robbies, Earle and Mustoe travel to England to be based in three different stadiums in three days.

Two sites will be very iconic to Premier League fans, White Hart Lane, the home of Tottenham Hotspur on Saturday and Old Trafford, home to Manchester United on Sunday. Riverside Stadium, home to Middlesbrough will be the site on Monday.

On Saturday, NBC’s EPL team will based at White Hart Lane for 8½ hours of pregame, halftime and postgame shows. Lowe, Earle and Graeme Le Saux will be in the on-site studio while Arlo White, Lee Dixon and Martino will be located next to the soccer pitch. White and Mustoe will call the Tottenham vs. Bournemouth match.

Sunday, NBC Sports Group moves to Old Trafford in Manchester for the run-up to Manchester United vs. Chelsea. Lowe, Dixon and Mustoe will be in the main stadium studio. Steve Bower will be the pitch-side host with Earle and Martino by his side. Arlo White will call the match with Kyle Martino

Then on Monday at Riverside Stadium, it will be an opportunity for Mustoe to return home to the pitch where he played for over 12 seasons. Lowe will be in the main studio with Dixon and Martino. Bower, Earle and Le Saux will be located next to the pitch while White and Martino call Middlesbrough vs. Arsenal.

For Lowe, it’s an opportunity to head back home to her native England. But she knows there won’t be much time to catch up with anyone, “I’m not even going to attempt to see any friends or family, I think my dad might try to come to our hotel in London for all of thirty minutes.” This is her second road trip. Last year she was on maternity leave to give birth to her son Teddy.

As for NBC Sports EPL Coordinating Producer Pierre Moosa, he looks forward to this trip every year. Moosa says it’s all about bringing the viewer closer to the game and the sojourn is always for a three-day weekend. He said the sites are always going to be an iconic stadium, a smaller club and stadium, and a big matchup like this year’s Manchester United vs. Chelsea.

He hopes to make this year’s version better than the last two, “You want to build on what worked and build upon what you can improve the show on. Our focus going back to is that before we change anything, what made it so special being the acccess, the locations, taking advantage of the pitch-side warmups, all of the walk and talks, and everything else on the scene. All of that works.”

At the same time, Moosa doesn’t want to overproduce everything so keeping things simple is important.

And Moosa said the trip brings its studio crew and announce team that are normally separated by the Atlantic together and build a cohesive relationship between the two, “.. this also gives everybody a bit of a road trip together and helps build that bond” as opposed to talking on the phone every week.

Both Lowe and Moosa discussed what they hoped the viewer will see on this trip.

Lowe: You’re going to get a sense of how close fans are to the pitch at White Hart Lane. It’s a really old-fashioned stadium and that there is not that space at all for the fans and so on for the players and I think we’re really going to show that off with the guys down at pitch-side.

Moosa: With it being potentially the last year of the stadium, we wanted to make sure people see the stadium and feel all aspects of it before it goes away. We’re in a unique situation where we’re going to be broadcasting the 7:30 (a.m. ET) match and then we’re still be there for an extra five hours with the 10 a.m. fixtures and the 12:30 (p.m. ET) match.

Lowe: (White Hart Lane) is so football. And there’s places where you can get your pie and your gravy just two seconds away from the grounds. There are tons of pubs, some of them have been there for over one hundred years and there’s a real neighborhood around there. I’m really excited about that because it’s a real heartbeat around there.

Moosa said on Saturday, the pitch-side crew of White, Dixon and Martino will be broadcasting from different areas of White Hart Lane such as the tunnel where the fans enter the stadium, the managers dugout, the stands and from a corner where construction of Tottenham’s new stadium which will also house NFL games can be seen.

Lowe: What more can you say? It’s a hotbed of success, well maybe not the last few years, but before that, the history is so rich there. That is really the scale of the stadium and the atmosphere. There is a weird atmosphere at Old Trafford which is slightly imtimidating because of the scale of the it … because of the success that has been witnessed in that stadium, and everything that Manchester United stands for, it’s one of those places you can’t believe you’re there even though you’re standing there.

Moosa: What’s unique about that is being right on the touchline where the manager walks along with this massive, massive matchup with players potentially coming out for post-match interviews. It’s really going to enhance the build-up to what is really, really a big matchup. The focus is really around the build-up to that match.

Moosa: To us, it’s the taking of a town and a club that is so proud of its stadium. It’s a beautiful stadium, one that our own announcer (Mustoe) was captain there for many, many years and for him to give us a tour of a place that’s so special to him and for people to really appreciate the stadium and everything that makes it so special.

And Moosa said that even though Middlesbrough is on the bottom half of the Premier League table and is in danger of relegation, he hopes to convey the love and passion the town has for the club.

Lowe: (Mustoe) is absolutely loved in Middlesbrough. He was there for 12 years and a really huge part of that team, very successful. We joke and tell him that he was useless, but actually, he was really a rather decent player and they love him up there.

On planning the next trip

Moosa is already thinking about next year and the locations NBC Sports will broadcast from in 2018, “There are a couple of stadiums and clubs that I’d love our audience to appreciate.”

On Lowe being a mom

Last year, Lowe couldn’t go on the trip to the UK as she was giving birth to her son. And adding to the mix is the fact that she lives in California as her husband, Paul Buckle coaches the Sacramento Republic in the United Soccer League. So Lowe travels some 3,000 miles every week to host the Premier League from NBC Sports’ headquarters in Stamford, Connecticut. And with this trip to the United Kingdom, it’s another weekend where she’ll be away from home.

“My job is unique because I live in California and my job is in Connecticut so I do have to leave my boy every week for a few days a week anyway, but I left him to do the Olympics when he was three-and-a-half months and it was the hardest thing I ever had to do in my life, but in a funny way set me up quite well for my job. So I compartmentalize quite well, or I like to think I do. I’m mommy during the week and I’m working mom during the weekend. I like to keep things separate and it works well.”

And as for son Teddy being brought up a Crystal Palace fan like her mom, Lowe said, “At the moment, he’s got more Sacramento Republic outfits than Palace outfits, but don’t worry, we’re not far behind with those numbers for Palace outfits.”

And the one thing that Rebecca plans to bring back to the United States from the U.K. will be plenty of chocolate. Not just any kind mind you.

“Cadbury chocolate is far and away the greatest invention that England has come up with after football, of course. As soon as I land in England, I’ll stock up on Cadbury chocolate and my husband is a chocolate fiend as well so I got to bring it all back to him as well!”

So Lowe is ready for the trip and so is the NBC EPL crew. The coverage from the U.K. begins Saturday with Premier League Live from White Hart Lane at 6:30 a.m. ET and continues all the way through Monday with stops at Old Trafford on Sunday and Riverside Stadium on Monday afternoon.