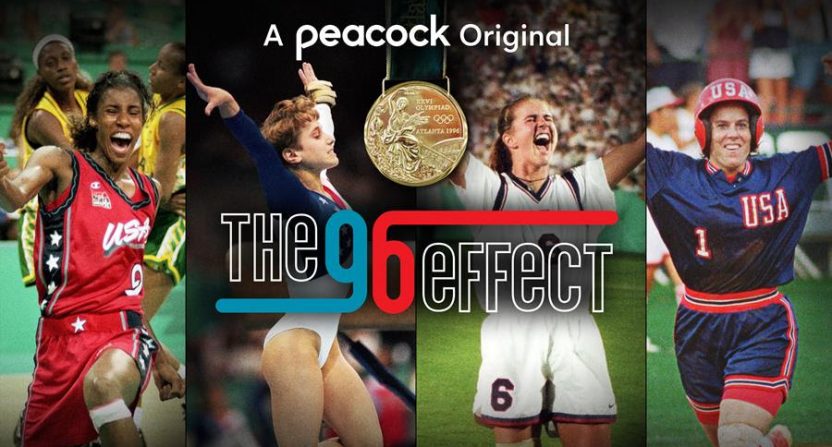 This summer marks the 25th anniversary of the 1996 Olympics held in Atlanta, and NBC is premiering several features on Peacock to honor that anniversary.

The two features are entitled The ’96 Effect and The Sisters of ’96, and will focus on various female athletes that excelled during the Atlanta games.

The ’96 Effect is a three-part documentary series, produced by Lookalike Productions, featuring four legendary USA women’s teams who won gold at the Atlanta Games. These women were the first generation who became world-class athletes during the Title IX era, and interviews with them reveal how ’96 USA teams inspired each other, the significance of Title IX on their lives, as well as the impact they made on their sport and female athletics on a global scale:

Tennis great Billie Jean King, broadcasters Bob Costas and Hannah Storm, and contemporary athletes Sue Bird, A’ja Wilson, Carli Lloyd, Cat Osterman, and Monica Abbott ground audiences in what it was like for women competing in 1996, which was the first time softball and women’s soccer were included in the Olympic Games. The ’96 Effect begins streaming June 17.

Meanwhile, The Sisters of ’96 will look back at the 1996 US women’s soccer team that won gold. Additionally, the gold medal match will be added to Peacock, the first time ever available in full.

When the U.S. Women’s National Team made it to the soccer tournament final, that gold medal match was not fully televised—so now, Peacock is making it available in full for the first time. The match will stream in its entirety on July 16. To mark the occasion, The Sisters of ‘96: The 1996 USA Women’s Olympic Soccer Team is an hour-long special that reunites stars Brandi Chastain, Joy Fawcett, Julie Foudy, Kristine Lilly, Shannon MacMillan, Briana Scurry, and Tisha Venturini on the field where they played that inaugural Olympic final to watch the match together for the first time. Viewers have a front-row seat to their recounting their victory and legacy of their team. The special is produced by NBC Olympics.

Once the Olympics begin, NBC will also air a nightly show called On Her Turf, which will follow the most significant US female stars and their medal pursuits.

Heading into the Olympics, NBC has premiered various features similar to these two including a three-parter on Michael Phelps and one on the 2008 swimming relay race.