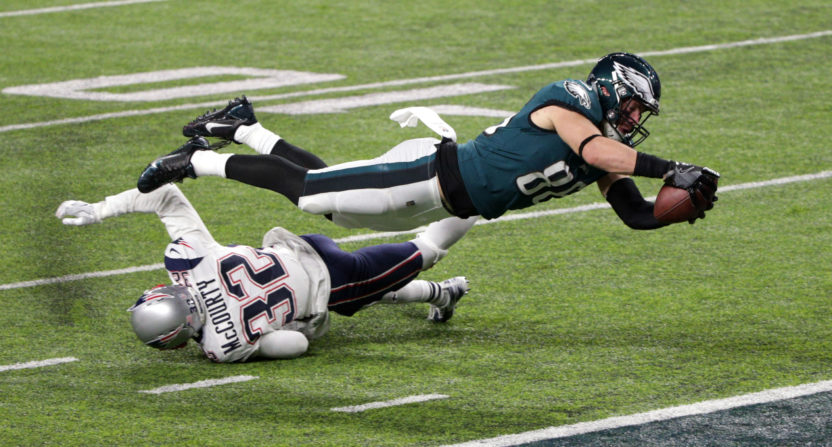 Twice during Sunday night’s Super Bowl, officials on the field used replay to review Eagles touchdowns, and twice NBC commentators Al Michaels and Cris Collinsworth were left to analyze the rules in question without the help of any sort of on-air rules analyst. The results were clunky.

On the first touchdown, Collinsworth insisted Corey Clement had failed to maintain possession while getting his second foot down in bounds on a third quarter pass from Nick Foles. When officials ruled that Clement had, in fact, completed the catch with both feet down, Collinsworth remained unsatisfied, and viewers were left confused at the distance between his reading of the play and the results of the replay review.

Then, on the Eagles’ go-ahead touchdown late in the fourth quarter, Collinsworth and Michaels seemed obsessed with whether Zach Ertz had maintained possession while going to the ground, instead of addressing the more pressing question of whether the tight end became a runner before diving toward the end zone. At one of the most pivotal moments of the game, viewers were largely left on their own to navigate the NFL’s complex catch rules.

In both of these moments, NBC would likely have benefited from bringing on a rules expert to weigh in, as Fox often does with Mike Pereira and Dean Blandino. Sure, Michaels and Collinsworth know the rulebook, but with all else they have to worry about, they can’t possibly keep up with someone whose entire job revolves around the nuts and bolts of the NFL’s arcane rules. A rules expert could have offered some authority on both touchdown calls, giving Collinsworth someone to bounce his convictions off of.

Sports Illustrated’s Richard Deitsch asked NBC producer Fred Gaudelli about whether the network could have used a rules expert, and the answer was fairly unsatisfying.

“We had a former referee and a league officiating supervisor in our booth tonight,” he said. “I can’t tell you what he was saying but I think it was so close that the ultimate arbiter was going to make his decision. I think [Mike] Pereira or [Dean] Blandino could have added their opinion and Cris was doing that as well but if you take the way the catches were called during the regular season, those [Eagles catches] were outside the parameters of what he [Cris] had seen all year. As a football fan, I’d rather see it called that way. I don’t know what the rules analyst would have added on those. With Cris, we have the best and I don’t really want to take it out of his hands because he really studies the rules and knows the rules. … If it was the right, right person, sure, you could probably use it. But I don’t know if I ever want to take it out of Cris’s hands. I had no problem with what Cris said.”

Gaudelli’s insistence on letting Collinsworth have the last word simply didn’t serve viewers. The NFL rulebook is famously confusing and on Sunday, America needed someone who could explain both what the rules say and why the referees interpreted them as they did. During the biggest game of the year, NBC should have had that voice on hand, and they let viewers down by not going the extra mile — especially during the biggest game of the year.