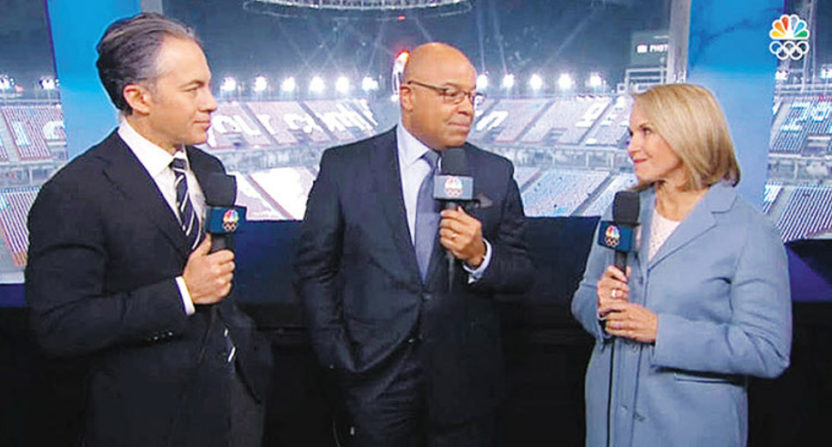 A comment during NBC’s coverage of the Olympic opening ceremony Friday has led to massive blowback, and to the network parting ways with a commentator. That would be Joshua Cooper Ramo, the co-CEO of consulting firm Kissinger Associates who also sits on the boards of Starbucks and FedEx, and was tabbed by NBC as a opening ceremony commentator alongside Mike Tirico and Katie Couric. (Ramo is seen at left above alongside Tirico and Couric.) NBC’s opening ceremony press release mentioned “Also joining NBC’s Opening Ceremony coverage will be Joshua Cooper Ramo, Co-CEO of Kissinger Associates, who discussed culture and geo-political issues for NBC during the 2008 Beijing Olympics.”

Well, Ramo did just that this time around as well, but created quite the scandal with his comments on Japan. After noting that Japanese prime minister Shinzo Abe was in attendance, Ramo described Japan as “a country which occupied Korea from 1910 to 1945, but every Korean will tell you that Japan is a cultural, technological and economic example that has been so important to their own transformation.”

That drew a lot of criticism, and was considered by many to gloss over that occupation and over its continuing fallout.  There’s still a strong divide between the countries, including over  a 2015 Japanese apology and compensation for the sexual enslavement of Korean women during World War II that many Koreans viewed as insufficient; South Korea called for a further apology and reparations last month, and Japan declined, raising questions about if Abe would even go to the Olympics.

So Ramo’s comments drew harsh blowback, including an online petition that reached over 8,000 signatures by Sunday (it now has over 15,000), and they led to NBC apologizing on air Sunday. Anchor Carolyn Manno read a statement saying “We understand the Korean people were insulted by these comments and we apologize,” and NBC sent out a statement saying “We apologized quickly both in writing and on television for a remark made by one of our presenters during Friday night’s Opening Ceremony. We’re very gratified that POCOG [the PyeongChang organizing committee] has accepted that apology.”

And, as per Jung Min-ho of The Korea Times, this has led to NBC deciding not to feature Ramo any further during these Games:

NBC Sports analyst Joshua Cooper Ramo has been relieved from its PyeongChang Olympic coverage after enraging many Koreans with ignorant remarks about their country.

An NBC Sports spokesperson, who refused to be named, told The Korea Times Sunday that Ramo has been removed from the role.

“It was possible for him to do more with us here; now it is no longer possible,” the official said.

NBC’s apology here makes sense, as does their decision to not work with Ramo any further. But the time delay here makes this particularly interesting, as this easily could have been prevented if a producer with some sense of the history involved and the potential controversy from these comments had been empowered to edit them out. Ramo’s comments were not live;  NBC streamed the opening ceremony beginning at 6 a.m. Eastern Friday, but only featured a raw world feed with natural sound. The produced feed with Tirico, Couric, and Ramo only aired 14 hours later at 8 p.m. Eastern as part of NBC’s primetime coverage.

So, there was seemingly plenty of opportunity to recognize that this would be controversial (and really, it shouldn’t have been that hard to figure out that comments comparing  Japan and South Korea would be touchy) and to take it out. But that didn’t happen, and this controversy came about as a result.

This also perhaps shows some of the challenges that come with diving into political waters during the Olympics, something that often happens during the Opening Ceremony in particular with comments on various countries. Comparisons between countries are perhaps particularly problematic, especially when they have the kind of controversial history that Japan and Korea do. And maybe this should be a lesson on what kind of topics for commentators to avoid going forward.

It’s not that Olympic broadcasters have to always stick to sports, as culture is a large part of the Games as well, but there should at least be some idea of which hot buttons not to push. And someone who’s brought in specifically to discuss “culture and geo-political issues” should know that better than anyone else. Ramo clearly missed that, and he won’t be featured any further as a result.