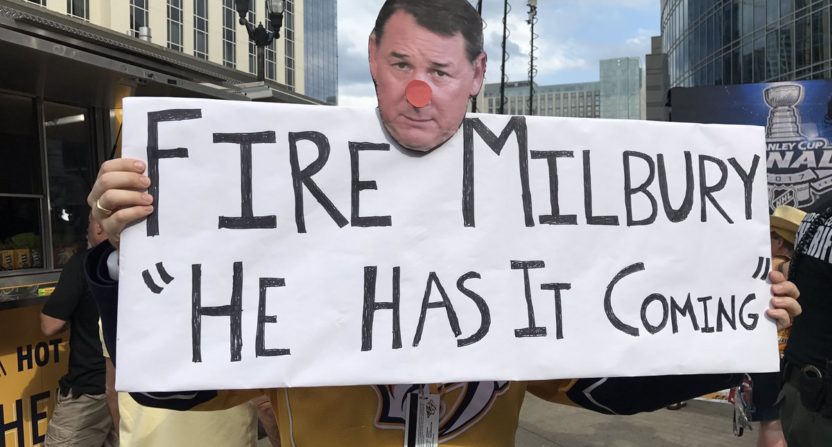 Mike Milbury doesn’t have too many fans in Nashville and that’s a fact NBC attempted to cover up ahead of Game 6 of the Stanley Cup Final.

Throughout the playoffs, Milbury has made a series of negative/outlandish comments regarding Predators defenseman P.K. Subban. He added another tally to the list during Game 5 when he said Subban “had it coming” when Penguins captain Sidney Crosby slammed Subban’s head repeatedly against the ice.

For context, here’s the incident from Game 5 in which Crosby tried to shove Subban’s head through the ice.

Milbury commented during the game, saying:

“He gets a little bit of a pound of flesh against Subban. It was cagey, and Subban had it coming.”

That comment represented a tipping point for Predators fans who believed Milbury crossed the line by saying Subban deserved what could have resulted in a head injury. Several fans created anti-Milbury signs and brought them to Game 6, displaying them both outside during NBC’s pregame coverage and inside the Bridgestone Arena for the game itself.

NBC noticed the signs and tried to do some damage control, offering hats in exchange for the signs.

An NBC Sports rep just tried to bribe me with a hat to give him my sign so it wouldn't be shown on TV ? pic.twitter.com/ExGdPVDw1C

Was just offered a hat in exchange for this sign by @NBCSports on our own plaza. Censorship much? #Predators @NHL #StanleyCupFinal pic.twitter.com/BMl4XWjMvk

Credit to the fans for coming up with some creative signs which both illustrate their point while mocking the comments Milbury has made about Subban throughout the playoffs.

This hat-for-sign trade was designed to draw attention away from the Milbury situation, but instead it backfired and now has media outlets (such as this one) highlighting NBC’s attempt to put out the fire without actually addressing the main issue. Milbury has been routinely criticized for his moronic comments for ages, yet he continues to feature prominently on the network’s hockey coverage.

At the very least, NBC could have offered these fans something a bit more tempting than an NBC hat.

Following Nashville’s loss in Game 6, one fan was pretty vocal about his displeasure with Milbury, telling him to “get the f*** out of Nashville,” among other pleasantries.