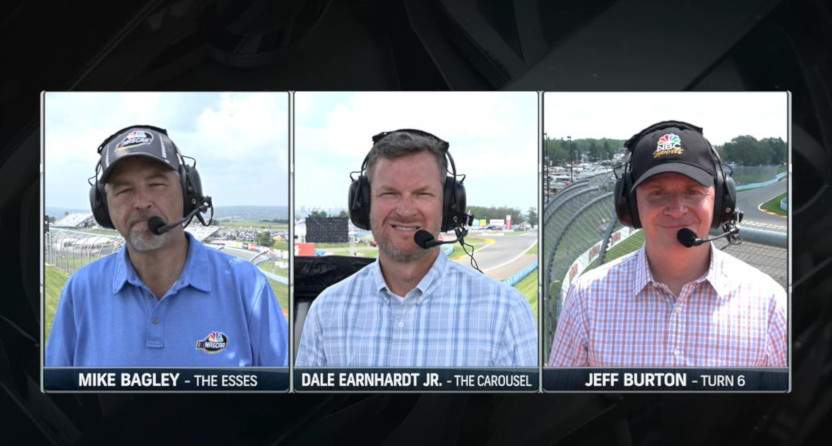 This weekend will see NBC’s NASCAR broadcasts making some history. At the Indianapolis Motor Speedway road course, both their Xfinity race (Saturday, 4 p.m. Eastern, NBCSN) and their Cup Series race (Sunday, 1 p.m. Eastern, NBC) will feature a “radio-style” setup with announcers spaced out around the course. The historic part of this is that while NBC has been doing some radio-style broadcasts since 2017, this will mark the first week that they’ll have done radio-style broadcasts in back-to-back weeks (they did this for last week’s races at Watkins Glen as well). NBC Sports VP of NASCAR production Jeff Behnke spoke to AA about this setup this week, and said it’s worked out as an excellent way to bring the energy of races to viewers.

“It gives fans and viewers an opportunity to feel the passion and the energy up close all the way around the track. And because the road courses are so spread out, it just made for a natural place to try these.”

At Watkins Glen, NBC’s setup was lead race announcer Rick Allen and Daytona 500-winning crew chief Steve Letarte in the main booth, veteran MRN and SiriusXM announcer Mike Bagley calling “The Esses,” Dale Earnhardt Jr. covering “The Inner Loop” and “The Carousel,” and then Jeff Burton at Turn 6 (as seen in the image above). A similar pattern will be in place at Indy, but with slightly different locations. Behnke said those particular transitions help build the energy.

He said this approach also stands out as a nice difference for the commentators.

“It gives our guys an opportunity to get out of their comfort zone. They’ve spent 20 weeks  in the booth. And these guys love it.”

Behnke said the radio-style broadcasts came out of a long-held desire he’d had to bring racing radio energy to TV production.

“I went to my first race when I was 18. I’ve been going to races every year for a long, long time. And I grew accustomed to when I couldn’t be at a race, to listening to it on the radio with MRN or PRN or whoever the broadcaster was. And I loved it; it’s the same thing, that jolt of energy that just continually goes on and on. And for 15 years, I talked about ‘Gosh, if we could just get that same kind of passion and energy, even a couple of times a year, on TV.'”

He said that finally came to fruition in 2017.

“So fast-forward to the winter of 2017. I’ve been talking about this with [executive producer and president, production, NBC and NBCSN] Sam Flood, my boss, and finally, I got together with another producer and we recorded the MRN broadcast [of a previous year’s race] and matched it up to one of our previous year’s races, the same race. And it was staggering how close it was. We thought it was going to be way off. …We did it, and it matched, and I turned to Sam, and he was like ‘All right, let’s try it.'”

“And that’s the great thing about Sam. Not only does he let you try new stuff, he encourages you to try new stuff. So I was like ‘Look, man, I’ve wanted to do this for 15 years.'”

Behnke said the first trials in 2017 worked out well, and convinced them this was worth doing.

“So in 2017, we decided Watkins Glen was the place to do it, and we met with our engineers, who are the masterminds of it. And we cleared the towers with the track, all the locations we could go, and Mike Bagley from MRN was really instrumental in helping us put this together, explaining where the best places to go on the track are. And I’m a massive fan of Pete Pistone and Mike Bagley and that entire MRN crew, and we decided that Mike Bagley was the guy to be a part of the broadcast.”

“2017, we set the towers up, rehearsed it in practice, rehearsed it in qualifying, and it felt pretty good. So we said ‘Let’s do the Xfinity race, and if it works, we’ll keep it, if it doesn’t work, we tried it.’ 10 laps in, my phone rang, and it was Sam, and he says ‘This is unbelievable.’ And I said ‘Are we clear to do it tomorrow?’ and he goes ‘Darn right.’ So we did it, and we’ve been doing it ever since.”

Since then, NBC has tried this approach at many different tracks, as Behnke discussed.

“2018, we did Watkins Glen and the Brickyard. 2019, we did Watkins Glen and Pocono. The Brickyard has long spans where you can easily do it, and Pocono, with the triangle, you couldn’t think of a better place to stick three guys out there. And then last year because of COVID we couldn’t do it. So this year we’re going back-to-back for the first time.”

The back-to-back approach this year is new, and Behnke said that’s helpful for maintaining the rhythm of the broadcast.

“The advantages are that everybody’s in a rhythm. They know they’re not going to the booth, they know what tower they’re going to. It goes Rick to Bagley to Jr. to Burton to Steve to Rick. The advantage is the consistency of it back to back. The challenge for this weekend is we’ve never done it there. Again, we leaned on Mike Bagley and said ‘Do you think this will work?’, and he said ‘Absolutely, it will work there.'”

He said this Indianapolis road course race is also useful because of the extra practice sessions involved.

“Another beauty of this weekend, and one of the reasons we picked it, is because we’ve got an Xfinity practice and a Cup practice, it’s one of those rare weekends where we’ve got practices this year. So we’ll be able to practice in the practice. And we’ll know a lot more after Friday’s Xfinity practice. But we feel pretty good now that we’ve already done seven of these. But logistically for our engineers, Eric Thomas and his team, it’s a different set of audio equipment up there. There’s just funny things; if you talk to Jeff Burton, he’s always talking about how much sunscreen he has.”

Behnke said there have been some challenges for producer Matt Marvin and director Sean Owens in picking up this style, but they’ve adapted incredibly well.

“It’s new for them. They’re used to having the guys in the booth. But [Marvin] has just become masterful at it. The cadence is, he goes, ‘We’re going to go around the horn.’ It’s awesome.”

As for the future of radio-style NASCAR broadcasts on NBC, Behnke said this approach can be a powerful tool, but they don’t want to overuse it.

“We want to keep it special. And if it becomes the norm, then it’s not special. There’s just a buzz with the crew. And don’t get me wrong, our crew is the most passionate group of TV announcers and production people I’ve ever been around, and when we’re not doing this, they are spectacular, and it’s a fantastic team. But in order to be great, you’ve got to be willing to try new things. …And after 15 years of waiting, it was pretty inspirational and pretty cool to see how the team pulled it off back in 2017, and here we are; skipping last year, this is our fourth year of doing it.”

He said it’s also important with these broadcast to know when to move away from the rapid-fire around-the-horn style to discuss more wide-ranging strategy.

“You’ve got to be able to be smart enough to know when to step away from it because of the stories to be told. You’ve got to do the strategy, you’ve got to talk about important storylines for the drivers. And that’s where the guys in the truck, the producer and the director and those guys, have to be able to know ‘If we have to step away from it for a few laps, we step away, because we have to make sure the fans and viewers understand the strategies that are happening.’ So that’s another little twist in all this. And then you get settled, you get the pit stop stories, and you get ready for Marv to boom out ‘All right, guys, we’re going around the horn!’, and off we go!”