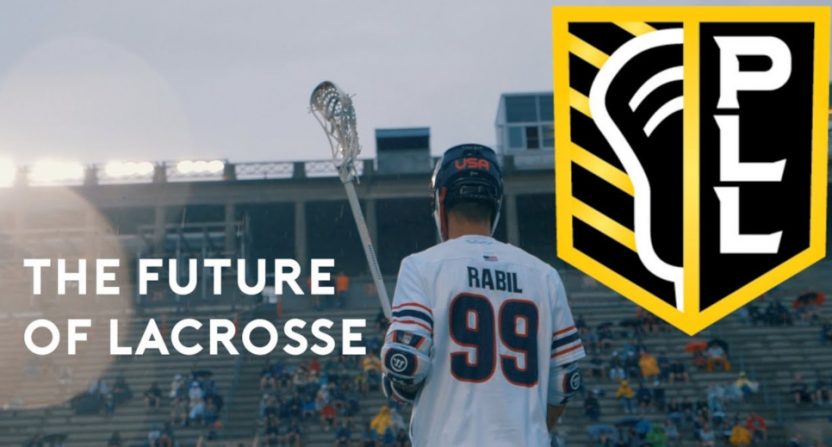 The NBC Sports summer lineup will look a little different this year thanks to the addition of the Premier Lacrosse League. That field lacrosse league’s inaugural season starts on June 1, and NBC will broadcast all 39 games in one way or another. Twenty of those games, including the opening-day doubleheader, will be exclusive to NBC Sports Gold’s “Premier Lacrosse Pass” streaming service, while 16 will be on NBCSN and three will be on NBC’s broadcast network. NBC announced their commentators for the PLL season Tuesday, and there are some familiar faces:

NHL play-by-play commentator Brendan Burke and men’s lacrosse Team USA World Champion Ryan Boyle will have the call from the booth during each broadcast, while Burmeister will provide pre-game, halftime, and postgame reports as well as sideline interviews. Chantel McCabe – anchor and reporter for Golf Central on the Golf Channel – will also serve as a reporter at various times throughout the season.

“We are so excited to bring in these elite commentators to introduce the Premier Lacrosse League and its world-class players to sports fans everywhere,” said Dan Steir, Senior Vice President, Production, NBC Sports. “Paul, Brendan, and Ryan will each bring their own backgrounds and experiences to our broadcasts that will provide unique access and discovery for the fans.”

…“NBC Sports Group has brought together three of the sharpest minds in sports to provide strategic and innovative commentary for our games in the inaugural PLL season,” says PLL Co-Founder and Atlas LC midfielder, Paul Rabil. “The relationship between an audience and talent is critical, and we’re eager to showcase Brendan, Paul, and Ryan’s unique skills and in-booth chemistry that will enhance our broadcast, giving us compelling insights into the competition.”

The league has six teams that will play a 14-week tour-based schedule, touring 13 different cities across the U.S. (from Massachusetts to Georgia to California) and Canada (Hamilton, Ontario) with 10 regular-season weeks, an all-star game, and three weeks of playoffs. The three NBC games are one in Week Two (Sunday, June 9), featuring co-founder/player Rabil’s Atlas LC against Chaos LC, one in Week Three (Sunday, June 16, again featuring Atlas, this time against Chrome LC) and the championship game (Saturday, Sept. 21). The NBCSN games are scattered throughout the season on Saturdays and Sundays (plus one on a Friday), and five of the 12 regular-season games (NBCSN’s 16-game count also includes three playoff games and the all-star game) also feature Atlas.

Atlas is thus appearing in 41.7 percent of the NBCSN games, slightly higher than the 33 percent you’d assume if the distribution was random.  (In a six-team league with games featuring two teams each, any individual team would have a one-third chance of appearing in any given game). Also, by that same math, Atlas’ chances of randomly appearing in the two non-championship NBC games would be 33 percent each, or 10.9 percent combined.  It must be nice to be a player and co-founder.

At any rate, this kind of lacrosse coverage is an interesting move for NBC, especially when it comes to the numbers of broadcast and cable games here. They’ve taken this approach before of picking up a sport, showing some of it on TV, and putting the rest in a premium streaming package (examples include Premier League soccer, cycling, rugby, golf, IndyCar and more), but it’s particularly notable that a new league’s inaugural season is featuring three games on broadcast TV and 16 on an established cable channel (NBCSN finished second to ESPN in total-day ratings last year; that was of course helped by the Olympics, but this is a channel with significant distribution and ratings).

By contrast, the AAF only received one broadcast game on CBS to start with. Two more CBS games were added later, but never actually happened thanks to the league folding. The AAF’s other games included a couple on TNT (slightly better distribution than NBCSN), a bunch on NFLN and CBSSN (both with worse distribution than NBCSN), and a bunch streaming-only on B/R Live. So the PLL’s TV schedule actually looks better.

This makes a fair bit of sense for NBC, though. Their first major property is the NHL, which usually wraps up in early June and doesn’t start regular-season play again until October (after the PLL’s Sept. 21 final). Last year’s June 7 NHL ending would be after Week 1 of the PLL season, but ahead of Week 2 (which has the first game on NBC proper). Of course, that was with a five-game Stanley Cup Final last year, so it’s possible the NHL could run into Week 2 of the PLL if its conference finals and Stanley Cup Final go long, but there isn’t going to be overlap beyond that.  NBC’s second major property is Premier League soccer, and that wraps up this week and doesn’t start again until August 10. So they have to go a bit further afield for summer programming (especially in a non-Olympic year), and that’s where the likes of IndyCar, cycling, rugby, and now lacrosse come in.

Will this new lacrosse league actually wind up being worthwhile for NBC? Well, on NBCSN, it seems to be a decent bet; even less-prominent live sports look like a better programming bet than studio content, and the PLL’s setup (all games in one location each weekend) makes for easier production and lower production costs, with only one set of commentators, camera operators and production staff needed. (It’s not clear if it’s NBC or the PLL paying for production costs, but either way, that matters). And the games on NBC and NBCSN may help promote the league and get people to buy the streaming pass, which is direct revenue for NBC.

One question is if the NBC games will draw enough of an audience to be worthwhile broadcast TV, but it’s certainly possible. Lacrosse does have passionate fans, and while this isn’t an established league like the box lacrosse National Lacrosse League, it’s not directly competing with it (the NLL final will be May 17-19). And this league’s airing during the summer doldrums, when there isn’t a lot else going on in big North American sports (especially once the NHL and NBA seasons wrap up), so maybe it will find a decent audience. At any rate, NBC’s certainly giving it some pretty prominent TV space.