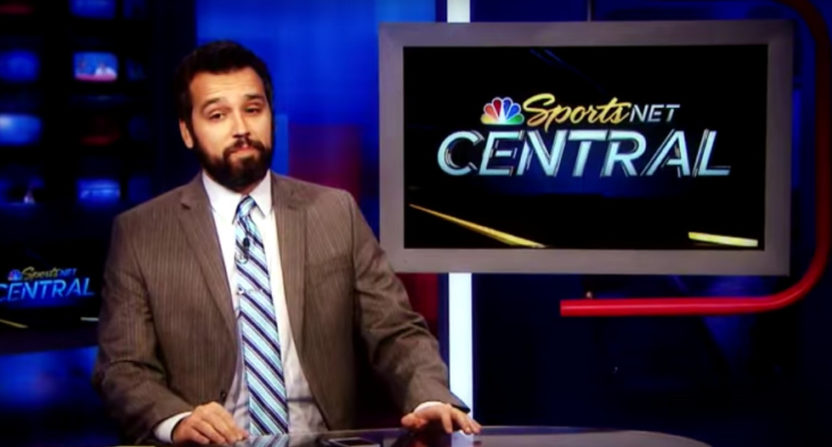 The hosting assignments for NBC’s coverage of the 2018 PyeongChang Olympics are out, and there are some big changes from both how the network covered the last Winter Olympics in Sochi in 2014 and how they covered last summer’s Rio Olympics. Mike Tirico taking over from Bob Costas as NBC primetime host (and skipping the Super Bowl to do so) had been previously announced, but NBC has now revealed its other hosts: Rebecca Lowe, Liam McHugh, Carolyn Manno, Ahmed Fareed (seen above), and Fred Roggin. And the changes to NBCSN’s coverage are particularly notable.

In 2014, Al Michaels, Dan Patrick, and Lowe combined to host weekday and weekend daytime coverage on NBCSN, and they all hosted on location in Sochi. In 2016, Michaels and Tirico were the main daytime NBC hosts, with McHugh and Manno hosting on NBCSN and Patrick and Lowe working on both networks. For these Games, Michaels and Patrick aren’t listed, Lowe will be hosting NBC’s daytime coverage, and Fareed will be hosting daytime coverage on NBCSN. And Fareed and Roggin (who’s hosting the curling coverage) will both be broadcasting from NBC’s International Broadcast Center in Stamford, Connecticut rather than from South Korea.

Some of this may be about the time zone. Sochi was eight hours ahead of Eastern Time, while PyeongChang is 14 hours ahead. Thus, daytime coverage in Eastern time was in the evening in Sochi (for example, noon was 8 p.m.), but would be in the middle of the night in Pyeongchang. And even though some Olympic events have had their schedules altered for the benefit of U.S. TV, the lineup of daytime Eastern events still looks to be lighter this time around. It’s also presumably much easier on the host to have them working regular hours instead of broadcasting all night.

It’s also interesting how much of a changing of the Winter Olympics guard this looks like. Costas, Michaels, and Patrick all aren’t involved (thanks at least partly to NBC also broadcasting the Super Bowl shortly before this), Lowe’s playing a more prominent role, as are McHugh (he was a NBCSN anchor in London and a host in Rio, but was only the hockey host in Sochi) and Manno (a freestyle skiing reporter in Sochi and a host in Rio). Fareed, normally an anchor and reporter for NBC Sports Bay Area, is working his first Winter Olympics for NBC and his second Games for them (he worked as a host on USA’s coverage in Rio).

This release is notable as well for what it doesn’t announce, specifically with regard to the Opening Ceremonies. In 2014 and 2016, Matt Lauer co-hosted that coverage, part of the 11 Olympics he’d worked on with NBC. Today colleague Meredith Viera co-hosted both times, alongside David Remnick in 2014 and Hota Kotb in 2016. Lauer was fired this week for “inappropriate sexual behavior in the workplace,” so he will not be returning to that role. We’ll see who winds up taking his place.