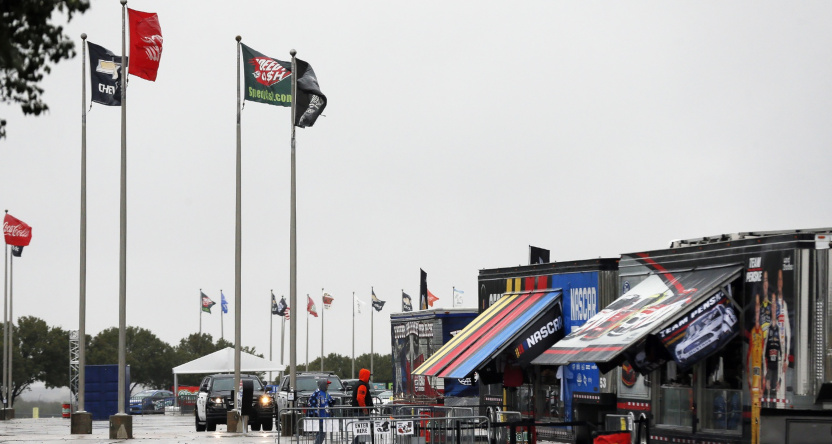 There have been quite a few NASCAR races delayed by one day due to weather over the years, but a delay of two days is more unusual. That’s what’s happened with this weekend’s Autotrader EchoPark Automotive 500, a NASCAR Cup Series playoff race at Texas Motor Speedway in Fort Worth. The race started Sunday, ran 52 of a scheduled 334 laps, and then was postponed to Monday thanks to wet weather. More rain Monday (seen above) saw the AirTitan and jet dryer trucks rolling, but the race was never restarted. And that’s now led to a postponement to Tuesday, as per NASCAR.com:

The Autotrader EchoPark Automotive 500 started Sunday afternoon, and 52 of a scheduled 334 laps were complete before wet weather forced a red flag. The race was set to resume Monday, but ongoing showers pushed that plan to a proposed restart Tuesday at noon ET (NBCSN, PRN, SiriusXM).

A NASCAR official statement regarding the weather at the 1.5-mile Fort Worth track stated: “With continued moisture and low temperatures hampering drying efforts, as well as a similar forecast for the remainder of this evening at Texas Motor Speedway, the resumption of the NASCAR Cup Series Autotrader EchoPark Automotive 500 has been pushed to Tuesday at 11 a.m. CT / Noon ET on NBCSN, PRN and SiriusXM NASCAR Radio.”

Jay Adamczyk of Jayski.com had more on how unusual this is:

The last time a NASCAR Cup Series race was run on Tuesday because of a weather delay was Sept. 6, 2011 at Atlanta, won by Jeff Gordon.

Update: Further rain and mist kept that restart from happening at noon Eastern, and for most of the afternoon. But NBC announced Tuesday evening that coverage will now resume at 8 p.m. Eastern:

We will be going live on NBCSN at 8PM ET! pic.twitter.com/jrVpQaeuxk

This is, like many other networks’ announcements, not quite when the actual resumption will start:

Coverage of the #Nascar Cup Series @TXMotorSpeedway will begin at 8 p.m. ET on NBCSN with a prerace show leading into the anticipated firing of engines at 8:30 p.m. ET for the resumption of Sunday's race.

Update to the update: And, it’s now rescheduled to Wednesday:

UPDATE: The resumption of the #AutotraderEchoPark500 has been pushed to Wednesday at 3 PM ET on NBCSN, @PRNlive and @SiriusXMNASCAR. pic.twitter.com/6zpcOERClI

And if things don’t go as planned Wednesday, that could lead to rescheduling of this coming weekend’s race at Martinsville in Virginia:

Note from NASCAR: Martinsville weekend schedule is unchanged for now. *However,* any further postponements would require some adjustments to the weekend. So we’ll see.

As I talk about here, if NASCAR gets Cup race in tomorrow, no adjustment to Martinsville schedule. NASCAR has floated with team owners (but not OFFICIAL) that if Cup runs THURSDAY, then TENTATIVE Martinsville plan Sunday afternoon-Cup, Sunday night-trucks, Monday night-Xfinity https://t.co/gHWs7aSLSd

At any rate, it’s certainly pretty remarkable to see a race delayed this way, and even more so for that to happen with a playoff race. And that’s more notable still when the resumption doesn’t go as planned.

And there are some significant implications with this one. NASCAR championship weekend is coming up in two weeks (Nov. 6-8 at Phoenix Raceway), and Joey Logano is the only driver who’s locked down a spot in that four-driver field (thanks to his Oct. 18 win at Kansas).

There’s just this race (which needs at least 115 more laps to be official) and Sunday’s race at Martinsville (Virginia) before the championship finale. So this one could mean a lot. Clint Bowyer, Jimmie Johnson and Erik Jones were running first through third at the time of Sunday’s postponement, and we’ll see how they do after the restart.