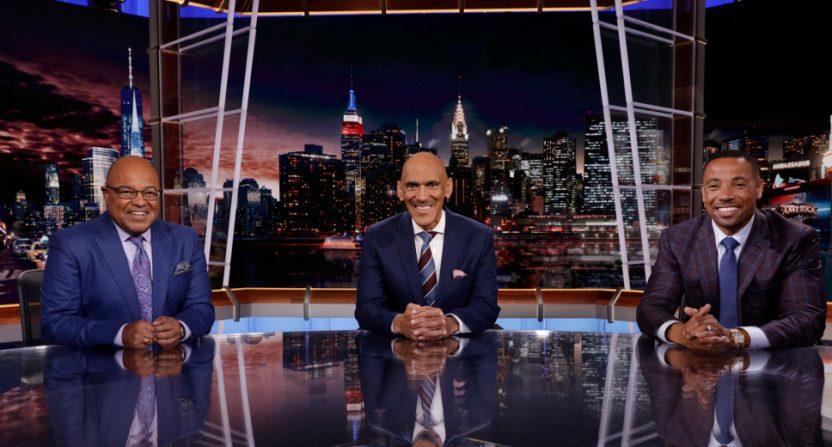 On Thanksgiving night, NBC’s studio crew will be headed to the broadcast booth. The network has the Falcons-Saints game next Thursday (with pre-game coverage starting at 8 p.m. Eastern, and the game itself starting around 8:20 p.m.), and they announced Thursday that it will be the Football Night In America cast of  Mike Tirico, Tony Dungy and Rodney Harrison on the call. (Michele Tafoya retains her sideline reporter role, and “will award the traditional postgame turkey legs and game balls,” as per NBC’s release.) That’s a change from their Thanksgiving game last year, where it was usual Sunday Night Football announcers Al Michaels and Cris Collinsworth. And NBC’s also doing some atypical pre-game coverage with a New Orleans flair:

…Set at Emeril’s New Orleans, the special show open is highlighted by Emeril setting the table for Falcons-Saints by creating NFL-themed fare that could only be part of a Thanksgiving feast in the Big Easy. And as dinner is being prepared, Trombone Shorty gets into the act with his distinctive brand of New Orleans music capped by his own rendition of the Sunday Night Football theme song backed by New Breed Brass Band.

“What better place to celebrate Thanksgiving than in a city that perpetually revels in food, family, and football,” Emeril said. “We’re so happy to be a part of this Thanksgiving special and bring our traditions home to you. Who Dat?!”

“To me, food and music are the heartbeats of New Orleans,” Trombone Shorty said. “To experience one of the best chefs in the world live and up close while he is creating his unique dishes and to be the soundtrack to that was really incredible.”

So that will certainly set the tone. But the more interesting part of this may be the studio cast heading into the broadcast booth. Tirico obviously has called plenty of NFL play-by-play, both at Monday Night Football during his ESPN days and on some Thursday and Sunday games since joining NBC, but Harrison and Dungy are newer to that role. (Dungy has worked the second half of the Hall of Fame Game for the last 4 years, so he has some experience there, but this still isn’t a regular thing for him.) And while both are experienced TV studio analysts at this point (both have been on FNIA since 2009), color commentary on a broadcast is quite different; there’s less time to prepare what you’re going to say, the expectation of chiming in more regularly, and often less chance to use particular video clips to make your points. We’ll see how they do on this one.

At any rate, Tirico, Dungy and Harrison should have a significant audience for this. Saints-Falcons is always a big rivalry, and with the Saints currently 8-1, there’s a fair bit on the line for them. (And while the 4-5 Falcons are unlikely to make the playoffs this year, they’d certainly love to dampen things for one of their rivals.) It should be a pretty great Thanksgiving night matchup. But we’ll see how the broadcast goes.