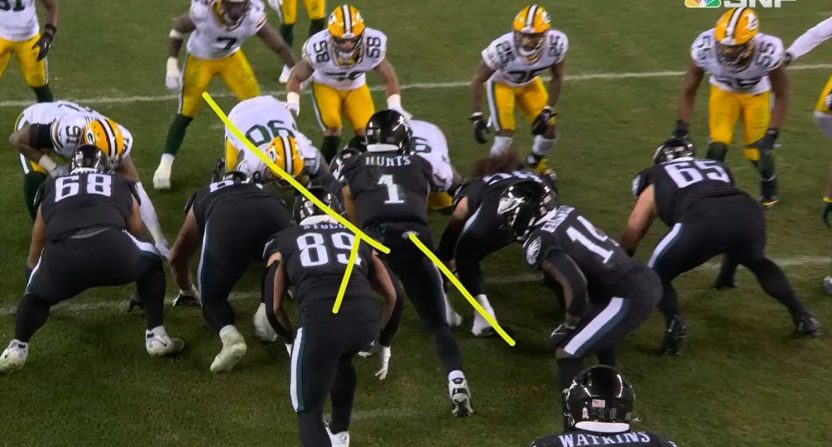 The most memorable moment of Sunday Night Football wasn’t Jalen Hurts’ dominant performance, Aaron Rodgers’ injury or even Jordan Love bursting onto the scene with a touchdown pass. It was Cris Collinsworth’s explanation of the double-cheek push.

During the fourth quarter of the Philadelphia Eagles‘ Sunday Night Football victory over the Green Bay Packers, Hurts ran a quarterback sneak on 4th-and-2, and as he pushed forward, he received some extra assistance from behind.

Collinsworth eloquently described the support for Philly’s quarterback as the “double-cheek push,” a reference that garnered a snicker out of NBC’s Sunday Night Football play-by-play voice Mike Tirico.

“This is a double-cheek push here,” Collinsworth said as the replay showed Hurts’ teammates pressing their hands firmly on each cheek. “Now, when he goes off that way, sometimes you only get a single cheek. But that’s what they do. They submarine underneath, and then they try to get the double-cheek push going, and it works all the time.”

“You didn’t do that did you?” Tirico asked his broadcast partner with a chuckle. “Did you have to give it to all of America?”

The analysis by Collinsworth was solid, but it was Tirico’s snicker that made this a post-worthy clip. Even polished and prominent play-by-play announcers can’t keep from laughing at a butt reference on national television. At least this was a little more PG than what Collinsworth said on an Eagles’ broadcast last month.

Philly’s double-cheek push helped propel them to their 10th win of the season with a 40-33 victory over Green Bay, who watched Rodgers exit the game early with a rib injury.