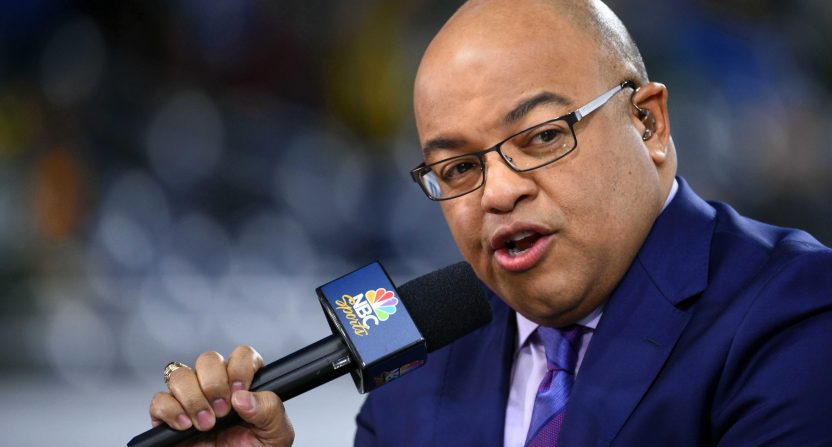 Back in 2018, NBC’s Mike Tirico (seen above in 2017) skipped the Super Bowl to fly to Pyeongchang, South Korea and prepare for the Winter Olympics. This year, those Olympics (in Beijing, China) are starting a week before the Super Bowl, and that’s led to a lot of notable moves. One of those is NBC’s announcement Thursday that Tirico will be hosting on-location in China for most of the first week, but then will fly to LA and host Olympic coverage remotely before hosting the Super Bowl:

In an unprecedented hosting double, Mike Tirico will host the NBC Olympics primetime show in Beijing (beginning Thurs., Feb. 3) and Los Angeles, while also hosting the Super Bowl LVI pregame show from SoFi Stadium on Sunday, Feb. 13, as NBCUniversal presents the two global events in an 18-day stretch next month.

Tirico will anchor the Olympic primetime show in Beijing from Thursday, Feb. 3 through Thursday, Feb. 10 before flying 6,200 miles to Los Angeles, where he’ll continue his Olympic hosting the very next night – Friday, Feb. 11 – from a special set outside SoFi Stadium, which will host Super Bowl LVI. He will host the primetime Olympics show again on Saturday night, before hosting the five-hour Super Bowl LVI Pregame Show on Sunday, Feb. 13. Immediately following Super Bowl coverage, he’ll return to the lake set to host Sunday night’s Olympic competition. Further details will be available in the coming weeks.

“There’s no one better than Mike Tirico to navigate this unique confluence — a global gathering of elite Olympic athletes in 15 sports in the world’s biggest media event and the game crowning the NFL champion in our country’s ultimate single-day sporting and media spectacle,” said Molly Solomon, Executive Producer & President, NBC Olympics Production. “Mike’s knowledge, preparation and ability to converse on anything from figure skating to football are second-to-none. We are counting down until it all begins next month.”

“It is a career highlight to host the biggest sports broadcast day any media company has ever undertaken,” Tirico said. “The foundation of our Olympic and NFL productions are the incredible people behind the camera. It is their planning and excellence that make this possible. I have never been more excited for a work project and to quote the great Ernie Banks, ‘let’s play 2!’”

As that release notes, this will be the third Olympics and fourth Super Bowl that Tirico has hosted. But it’s interesting that he’s doing both of these events this year, as 2018 saw him doing extensive interviews about how much preparation was required for the Olympics, leading to him deciding not to do the Super Bowl that year (even with that taking place days ahead of the Olympics’ start):

“Of course I would have loved to do both, but logistically it so unrealistic. If I leave Minneapolis on Sunday night after the Super Bowl, I’m not at the IBC (international broadcast center) until Tuesday in the middle of the day in South Korea, and Thursday we are on the for the first prime-time show. If you have one bad weather day, what are you going to do?

Of course, much of the world has changed since 2018. And even at that point, there were discussions about Bob Costas hosting the Super Bowl in place of Tirico (which ultimately didn’t happen). And it’s notable that NBC really doesn’t currently seem to have a significant potential Super Bowl host other than Tirico, with the likes of Costas, Liam McHugh, and Dan Patrick all leaving them since 2018. So there’s certainly some logic for them in having Tirico host both the Olympics and the Super Bowl, especially as there’s not an obvious replacement for him.

In some ways, though, this is a funny further reflection of the current shift to remote studio broadcasts. That trend started before the COVID-19 pandemic, but the pandemic has certainly exacerbated it. And that’s an interesting point here; there’s no real reason why NBC’s Olympic coverage on Feb. 11 and Feb. 12 couldn’t originate from Beijing, other than Tirico not being there. And sure, maybe there won’t be that noticeable of a difference between him hosting from an off-site location in Beijing and hosting from an off-site location in China, but this is definitely a bit more removed than what we’ve usually seen. And we’ll see how it’s received, and we’ll see what this means for NBC’s broadcast plans for the second week of the Games.