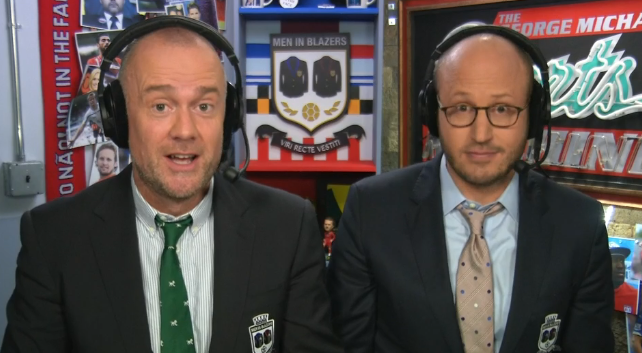 There aren’t many people in sports media who have exploded in popularity over the last few years than Roger Bennett and Michael Davies, the Men in Blazers. The pair have gone from hosting a soccer podcast to being mainstays on television every week for NBC’s Premier League coverage. But their success has gone much further than that, as BlazerMania has sub-optimally run wild across America.

The MiB have partnered with Yahoo on their NFL coverage, covered the Running of the Bulls, started their own soccer convention, written an NYT best-selling book, and even had a dating site dedicated to them.

And now they’ll even have their own show around NBC’s coverage of the British Open (or Open Championship, if you want to be all Professor Higgins about it) for five nights a week throughout the tournament. Hopefully there’s a decent sized broom closet in Carnoustie.

Via the Hollywood Reporter:

Roger Bennett and Michael Davies — the football mad Men in Blazers — will expand their brand to golf with a five-day series on NBCSN from The Open, the game’s oldest major, which this year returns to Carnoustie Golf Links in Scotland. The duo contributed to NBC’s coverage of last year’s tournament, but this year, they will get their own regular show, which will air July 18-22 after play finishes.

“The show from The Open is a natural extension for The Men in Blazers, who have built a devoted following among NBCSN viewers with their unique style of commentary and wide range of guests from the worlds of sports and entertainment,” says Jon Miller, president of programming for NBC Sports Group. Carnoustie Golf Links, one of the oldest courses in the world, hosted its first Open in 1930. NBC and Golf Channel will devote 180 hours to the event — including 50 hours of live tournament coverage — beginning Tuesday and running through July 22.

As a soccer fan and a golf fan (not sure how many of those people exist stateside), I am really looking forward to this. Davies and Bennett can brighten up coverage of any event with their unique blend of insight, levity, and humor. And they’re British, so that immediately has to give them street cred with even the most hardcore, selective golf aficionados out there.

Really though, this should be only the beginning for MiB, as NBC should just give them a show for all of their major sporting events. Wouldn’t you rather watch Davies and Bennett at halftime of the Stanley Cup Playoffs than Mike Milbury and Jeremy Roenick? How about the Tour de France? Rugby, Big Bash League Cricket, Ivy League football. Let’s just go all in. Maybe having the Men in Blazers in the booth could even boost NASCAR ratings! It couldn’t hurt, right?