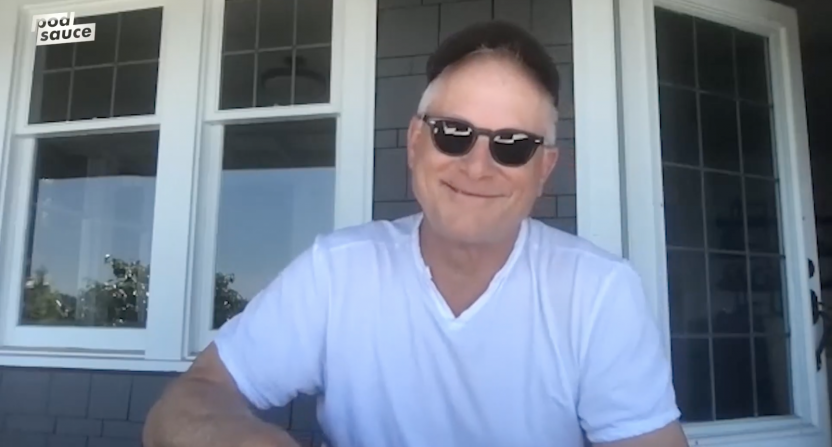 For the second straight year, one Notre Dame game will air exclusively on NBCUniversal streaming service Peacock. Last year, that was the season opener for the Fighting Irish, against the Toledo Rockets. This year, it’s this Saturday’s game against the UNLV Rebels. And for that broadcast, NBC Sports is adding an interesting sports media personality who played quarterback for UNLV for two years. That would be Kenny Mayne.

As per NBC’s release, Mayne (seen above during a 2021 appearance on Audacy’s Podsauce) will be an on-site guest analyst for the pre-game, halftime, and post-game shows, alongside host Kathryn Tappen and fellow guest analyst Kyren Williams (a Notre Dame alum who’s currently a running back for the Los Angeles Rams). Here’s more from their release:

Kyren Williams currently plays running back for the Los Angeles Rams after being selected in the fifth round of the 2022 NFL Draft. Williams earned Second Team All-ACC and ACC Rookie of the Year honors last season at Notre Dame.

Kenny Mayne was a quarterback for two years at UNLV and signed as a free agent with the Seattle Seahawks before becoming a sports media personality.

Mayne has done some work for Peacock before, including co-hosting nightly Tokyo Olympics recap show Tokyo Tonight with fellow ex-ESPNer Cari Champion last year. But he’s a particularly good fit to bring in for this game with his UNLV connection and his extensive sports media resume. This fits with what NBC has been doing for Notre Dame broadcasts all year, tapping different alums from both the Irish and their opponent each week to join Tappen for pregame/halftime/postgame coverage (last week’s Notre Dame-Stanford broadcast saw Cole Kmet and Coby Fleener in those roles, while Oct. 8’s Notre Dame-BYU clash featured Manti Te’o and Chad Lewis), and it’s cool to see Mayne picked for this.

It will also be interesting to see how a Peacock-exclusive game is received in its second year. Peacock streams all Notre Dame football games airing on NBC, and they have exclusive coverage of the spring football Blue-Gold game, the Pro Day, and the hockey team, but this will mark the second year in a row where they’re the exclusive broadcaster of a Notre Dame football game. Streaming-only games have taken some pushback in the past, but they’re becoming more and more common across sports, and that trend’s likely to continue. But there still can be hurdles, especially when it’s a product like Notre Dame football that’s often available on broadcast TV. We’ll see what the reception is for this one.