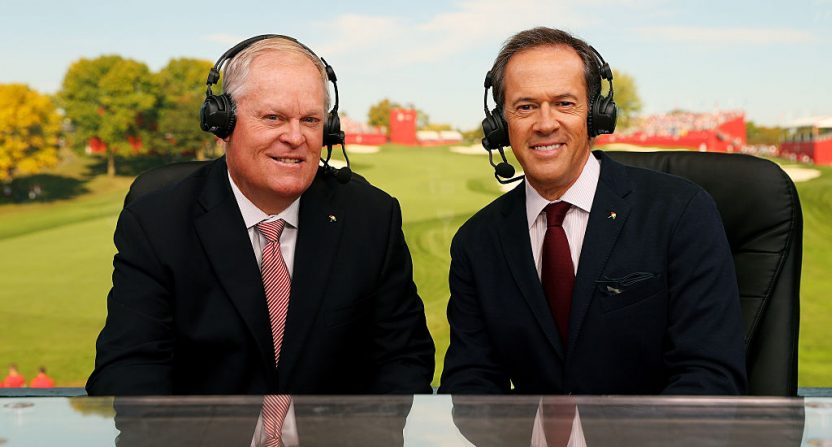 Back in 2014, NBC signed golf analyst Johnny Miller through 2017 with an option for 2018. So we’re at a point where this could be his final year. With Miller turning 70 in April, he might be thinking retirement.

When he signed three years ago, Miller told Golf.com that knowing that he was getting up in age, he felt he was still on top of his game and hasn’t lost his marbles, “So far, I haven’t lost too many. I’ll be the first guy to quit this if I start losing it.”

In the period between when Miller re-signed with NBC until now, the Peacock went from being a network without a major championship having lost the U.S. Open to Fox to getting one back with the Open Championship last year. And despite NBC having the Open well into the next decade, Miller may be thinking of going out on his own terms.

Over the last year, Miller has been at the 18th tower for the Open Championship, Olympics and the Ryder Cup. This year, he goes in ready to call another year of the PGA Tour starting with this week’s Honda Classic, Miller has options. He could call it quits this year, agree to have NBC pick up his option for 2018, or sign a new contract.

NBC certainly likes having Miller in the booth with Dan Hicks and they have shown a great chemistry over the years. And Miller’s honesty while not popular among the players, has been appreciated by his network bosses.

Let’s say for argument’s sake that Miller decides to retire after this season. NBC would have to scramble for a replacement. It does have David Feherty, but he’s better as a course reporter than a tower analyst.

But what if Miller stays for another three years? There could be some incentives. The 2019 Open Championship will be held at Royal St. George’s Golf Club, where the very first Open was held. In addition, with the USGA and Fox in what could be precarious situation over their marriage, NBC/Golf Channel would be only happy to swoop in to regain the U.S. Open. If that happens, Miller might be persuaded to remain for at least one more go-around.

Certainly NBC would prefer Miller to stay, but it will defer to him on this. If he feels he’d rather leave, than it’s likely that the network won’t stand in his way, but if he decides to sign another contract, NBC execs would only be happy to have him stay.

It’s all up to Miller and NBC can only go for the ride.