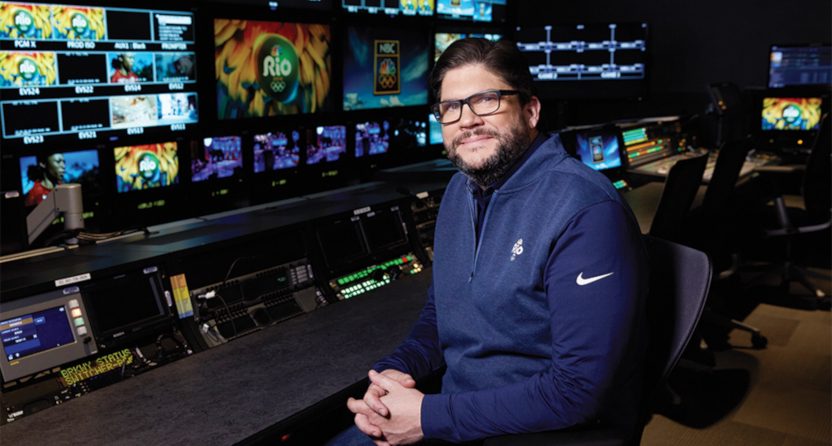 NBC’s Tokyo 2020 Olympics coverage will now have someone new heading it up. Jim Bell announced Monday that he’s leaving NBC after 29 years; he’s currently the president of NBC Olympics production & programming as well as the showrunner of The Tonight Show Starring Jimmy Fallon (since last year). Bell has overseen NBC Olympics coverage since the 2012 London Games, and has been involved in many of NBC Universal’s other big live events, including producing Telemundo’s coverage of the 2018 FIFA World Cup.

Deadline has a statement from him on why he’s leaving now:

“The past year with Jimmy and the terrific team at the show has been a blast, and I will always be grateful for this opportunity. But after serious contemplation, I realized I did not want to extend my time at the show,” Bell said. “Those thoughts are part of larger ones I have been having about my career, and what has emerged for me is a strong desire to delve into something new — to build on my experience in news, sports, and entertainment so I can broaden and deepen my leadership role in the content universe. Along with my Olympic colleagues, we have positioned NBC Sports for an incredible Summer Olympics next year, and so I believe the timing is perfect for me to forge a new path. I will always look back on my years at NBC as an extraordinary chapter in my life, and thank the many talented individuals who have joined me in truly meaningful work around the globe. Right now I am looking forward to a great show in Texas.”

(The “great show in Texas” is The Tonight Show doing a week of shows from the campus of the University of Texas at Austin. Bell will stay with the show through this week, then leave.)

It’s notable to see Bell exiting NBC, as he was a key fixture on their Olympic coverage through London, Sochi, Rio and PyeongChang. And in addition to his behind-the-scenes work, he drew some attention in the media; Bell was one of the NBC Olympics figures who would talk to press about their coverage (including on pre-Games conference calls), and he made headlines himself for a 2016 Twitter exchange suggesting that someone who complained about tape-delayed Olympic coverage on TV should either stream it on a computer or “move back east.” Funnily enough, when NBC finally made the much-demanded move to air primetime main-channel coverage live across time zones in 2018, Bell talked up how logical that move was in a release:

“Nothing brings America together for two weeks like the Olympics, and that communal experience will now be shared across the country at the same time, both on television and streaming online,” said Bell. “That means social media won’t be ahead of the action in any time zone, and as a result, none of our viewers will have to wait for anything. This is exciting news for the audience, the advertisers, and our affiliates alike.”

So that’s a bit of a changing of tune, and a move that came too late for many critics. But in Bell’s defense, watching habits and social media habits did change over his time running NBC’s Olympics broadcasts, and that move (which did come with somewhat of a tradeoff, as the primetime broadcasts then started ahead of primetime on the West Coast) became more and more logical as time went on. At any rate, the move was eventually made, eliminating one of the complaints that always shows up. And that’s only a small part of Bell’s overall tenure (and NBC’s Olympics coverage has won a lot of praise overall, even with some whiffs), and he and NBC got to the right answer there in the end. And it will be interesting to see what “something new” he dives into now.

It’s also going to be interesting to see who replaces Bell. John Ourand of Sports Business Journal quotes a statement from NBC Universal broadcast, cable, sports & news chair Mark Lazarus and NBCU sports group president Pete Bevacqua where they mention “a large number of experienced and talented people who have worked alongside Jim”:

In a joint quote provided to reporters from NBCU Broadcast, Cable, Sports & News Chair Mark Lazarus and Sports Group President Pete Bevacqua, the execs said, “We have a large number of experienced and talented people who have worked alongside Jim in the NBC Sports Group, and we will be making decisions about structural changes to the team in the coming weeks.” They highlighted Bell’s NBC career, where he has been “a part of every major sports production. … As President, NBC Olympics Production & Programming, he has overseen the significant increase in our ability to make every Olympic event available live online, as well as production enhancements that have kept our award-winning Olympic broadcasts on the cutting edge of the sports media landscape.”

As Ourand notes, NBC Sports Group executive producer Sam Flood is one possibility to take over Bell’s leadership role, but Flood has a lot on his plate with NBC’s regular sports coverage. So it’s also possible that one of the people who worked with Bell on the Olympics side may be tapped for his job instead. In either case, NBC’s Olympic coverage is going to have someone new overseeing it next summer. And we’ll see if that winds up changing much.