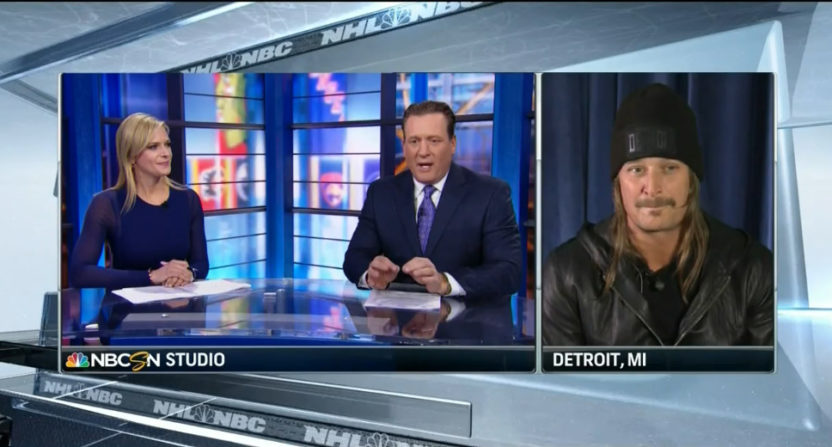 The NHL’s choice of Kid Rock, or Robert James Ritchie, as its featured All-Star Game performer drew a whole lot of backlash when that move was announced Tuesday, for reasons ranging from his endorsement of Donald Trump to his controversial political speeches at concerts to his flirtation with running for a U.S. Senate seat to just criticism of his music and relevance. But NHL on NBC analyst Jeremy Roenick, a long-time friend of Ritchie’s, is upset about that backlash. Roenick made his support for Ritchie well-known in the NBCSN interview Tuesday (seen above) announcing the news, even calling Ritchie “the most talented musician, I think ever, on the planet,” and in a wide-ranging interview with Brandon Schlager of The Sporting News Wednesday, Roenick went off on those criticizing the choice:

SN: Are you a Kid Rock fan?

JR:  I’m a huge Kid Rock fan. I’ve known him (Robert James Ritchie) for a bunch of years now. I love his music, I know how talented he is. I’ve been around him when he’s done impromptu performances, whether he’s sitting on an airplane or standing in a bar with him in Chicago. He’s without question going to totally entertain the fans at the All-Star Game because he loves music so much and he wants to make sure the performance he gives is all about the music, all about making people happy, all about making them sing and rock out. So I think it’s going to be pretty special to watch. It’s a great get.

SN: There’s some unfavorable feedback about the decision given Kid Rock’s controversial political background. Do you think that should factor in?

JR:  See, this is where I get driven crazy by people today. Why does anything have to do with politics or where he stands with politics when it comes to entertaining and singing to people at a sporting event? It drives me crazy. All these people have their panties so hung up they can’t think even straight. They don’t understand the performance. Entertainment has nothing to do with whether he likes (Donald) Trump or he doesn’t like Hillary Clinton. Let him perform, sing his songs that have nothing to do with politics. All these people have got to stop with this narrative that’s going around and the divide they’re bringing to this country. It’s driving me crazy.

(Update: The SN transcription of this has now changed to “All these people have their panties so hung up they can’t even think straight.”)

This is far from the first controversial comment from Roenick, previously seen calling Colin Kaepernick’s protest “disgusting,” calling Kanye West “racist,” bashing Marshawn Lynch and NFL protesters with a fake James Harrison quote (seriously), blasting the NHL players suing the league over concussions (despite suffering 13 concussions himself), and almost fighting Mike Milbury on set in an argument about rough play (apt). And it’s understandable why he doesn’t like people criticizing his friend or an artist he likes. But Ritchie himself has made “where he stands with politics” a big part of his musical and on-stage persona, regularly going into political rants and using controversial symbols like the Confederate flag, and even if he doesn’t do any of that during this particular performance, many will still view giving him this gig as a political move.

Beyond that, though, it’s Roenick’s “panties so hung up” comment that’s particularly likely to spark a backlash. There’s a long history of male hockey players and analysts referring to players they don’t like as feminine, or complaining about female fans or journalists, or making homophobic remarks. There’s also more and more pushback against that recently, especially with the growth of women’s hockey and with the NHL’s work with organizations like You Can Play. While Roenick clearly hasn’t changed his tune, there may be a number of people not thrilled that one of NBC’s most prominent analysts would make a “panties so hung up” comment. We’ll see if there’s any action taken by that network over this.