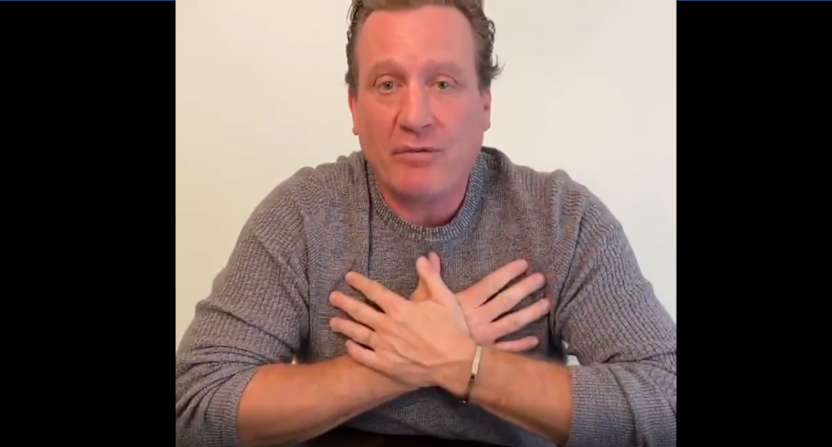 “I’m very disappointed and angry today. I will not be returning to NBC. And though disappointed, I’m also grateful that I’ve had the opportunity to share my love, my passion, and my knowledge of the game with millions of people, millions of fans. And for that I thank you. And even though I’m leaving NBC, I will not be gone for long.  I’ll be back better and more motivated to bring you the best entertainment and the best that I have for the game of hockey. I’ve seen all the support, I’ve read all the support, I thank you from the bottom of my heart. It’s overwhelming. And for that, I can’t wait to see you soon.”

During the podcast, Roenick described a summer vacation he took in Portugal with his wife and NBC Sports studio host Kathryn Tappen. He told a story of how at least one hotel guest approached Roenick to ask if the three were together. “I play it off like we’re all going to bed together every night, the three of us,” Roenick said. “If it really came to fruition, that would really be good. But it’s never going to happen.” Later during the same discussion, Roenick said that his wife and Tappen are close friends and he praised Tappen’s professionalism. “Kathryn Tappen is one of the most professional … sports personalities that I know. She is true blue one of my favorite people in the world.”

Later in the podcast, Roenick discussed the physical appearance of fellow NBC hockey analyst Patrick Sharp. “He is so beautiful, I’d have to think about it if he asked me,” Roenick said. “I wouldn’t say no right away.”

That podcast also saw Roenick making a joke that neither he nor Anson Carter gets the attention Sharp does because of Sharp’s appearance. Roenick put out an apology in January:

“I want to take this opportunity to apologize to NBC Sports, Kathryn Tappen, Patrick Sharp, Anson Carter, for some insensitive comments I made on a recent podcast. I never meant to offend anyone, and I definitely went too far, and for that, I deeply regret it. I’ve called everybody involved and I’m so thankful for their loving and gracious acceptance of my apology, and that includes my family and friends.”
“I will make sure, in the future, that I’m mindful of people’s feelings, the sensitivities of my coworkers and of all you, my loving fans. I hope to see you on air soon. I hope you can accept my apologies.”