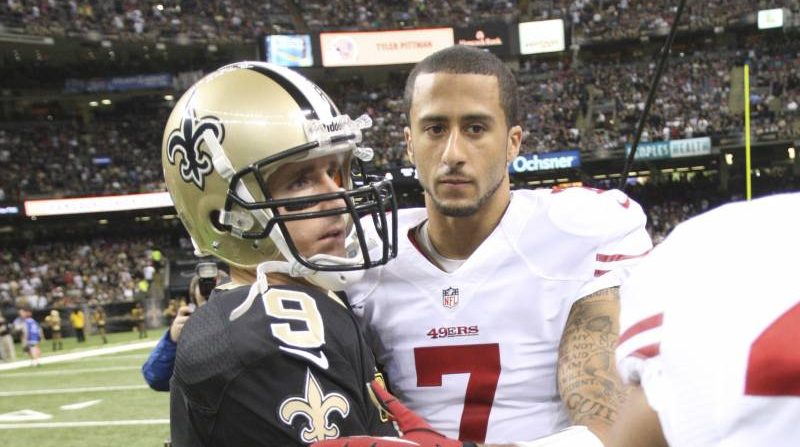 I’ve written about Drew Brees being a likely lead announcer at a network for almost a decade. I’m not alone in that thinking as this offseason he was allegedly courted by three of the four major broadcasting partners with CBS, ESPN, and NBC all making their pitch to Brees. That’s quite a courting, given Brees won’t be calling games this fall and perhaps for a few more years. With Peyton Manning fine printing money not calling games, networks were lining up for what they thought was the most sure things in sports media.

Ultimately, despite a more obvious fit at ESPN, Brees reportedly opted to go with NBC where the popular conjecture was that he’d spend a few years doing studio work and potentially calling Notre Dame games and if all went well, he’d soon find himself in the booth for Sunday Night Football either augmenting or replacing Cris Collinsworth.

Sure none of this was a done deal given TV contracts with the league could change what network has what package and perhaps Brees apprenticing at NBC could have been met with Jason Witten like hostility. However, Brees signing with NBC over a very in-desperate-need ESPN, a year, or years, before his playing career is over was a pretty clear indication that NBC was making a Tony Romo sized bet on Brees. It sure seemed like a smart bet at the time.

Fast forward to today, and Brees is getting absolutely pummeled from all corners following his “I will never agree with anybody disrespecting the flag” remarks Wednesday. Teammates, former players, media members, fans, pundits, and politicians. Brees’ comments yesterday on his thoughts on continued protests during the anthem exploded in a way that frankly surprised me. It’s dominated the sports news cycle and is not only the lead story all of last night and today, but has often taken nearly half the allotted time on a lot of the major sports programs. Brees eventually backtracked and offered an apology, but the question remains- does this change the prospects of his broadcasting career going forward?

The first thing to consider here is Brees to NBC a 100% done deal? This was reported in April, but neither NBC nor Brees has confirmed the reports. NBC indicated to us that they couldn’t comment on the matter given he was never officially announced as a NBC hire.

While it’s not really disputed that NBC and Brees intend to work together, the question is did that deal get signed, and would NBC potentially slow-play the actual contract signing while Brees repairs his image? The majority of sports fans are likely unaware of the reported Brees to NBC agreement (after his playing career), so thus far NBC’s avoided any substantive blowback tied to Brees’ comments.  Obviously a formal announcement of him joining the network tomorrow or next week would not sit well with many and would bring a lot of bad publicity to NBC. It’s not rocket science to deduce that if the network was finalizing the actual agreement and the announcement, it’s likely we may not hear about this officially for quite some time.

Outside of the timing of the announcement,  would NBC actually about-face away from Brees? I asked a few people with high level experience doing both talent relations and production at other NFL broadcast properties. There was a strong consensus from everyone I talked to that Brees’s broadcasting career would not be adversely affected by the sudden crisis Brees now finds himself in. There was a strong belief that Brees would “make this right” and that “time was on his side”. Brees is perceived to not only have a high ceiling in broadcasting but because of his age would be a long-term solution, unlike a retiring coach who is often in their 50s or 60s.

While the smart money seemed to be on Brees earning back his standing with fans, it should be noted this is not Brees’s first controversy. Brees didn’t exactly earn high praise for his apology for his involvement in a video that advocated “Bring Your Bible To School Day” . While the video itself was pretty harmless, it was produced by Focus on the Family, a group known for their anti-LGBT platform which includes being against same sex marriage and supporting conversion therapy.

Brees also was oddly the main spokesperson of AdvoCare, a company that this past fall agreed to a $150 million settlement over Federal Trade Commission that the company was an illegal pyramid scheme. In a commercial for AdvoCare, Brees went as far to say “the financial benefits can be just as rewarding for those who want more and decide to build their own AdvoCare business.”

To his credit, Brees has a pretty extensive history working with various charities and earning an extensive amount of goodwill with fans. His Wikipedia page’s “charity and volunteer activities” section is quite the resume.

So what does this all mean for Brees, NBC, or any other broadcasting option that he may pursue? Brees does indeed have a massive hole to dig out of. Now more than ever, networks are looking to sidestep notable baggage of their talent given social media now allows ruthless feedback on the actual announcing performance. I certainly don’t think Brees to the booth in 3 months would be feasible if he was indeed set to start this upcoming season, so yes…time is on his side in that regard.

With that time and some positive history and banked goodwill, I think it’s likely he’ll be able to do the necessary image repair things that will allow him to transition into his broadcasting career as planned. Will he be doing these things because he believes it’s right or will he be doing them because it’s advantageous to his image and his earning potential? I doubt we’ll ever know.

If I'm @NBC I'd be re-thinking the contract for Drew Brees to replace Chris Collinsworth as Sunday night football analyst when he's done playing.

While I continue to think that Brees has the chops to be a great announcer, it’s also baffling that such a well-liked high-profile individual who you would think has a team to help him with stickier things has now recruited people into a pyramid scheme, lent his name to a group that supports conversion therapy, and now, at the worst possible time doubled down on an unpopular opinion that was toxic to so many people around him. That’s three incidents that make you question his awareness, instincts, and the people who help him make decisions. That’s not JUST a bad interview. That’s a pattern and it’s hard to ignore.

Drew Brees gets the benefit of the doubt because he so often has done the right thing and he checks just about every box you’d want for a high-profile position in media or just about anywhere. And if we’re talking about privilege, he seems to have quite a lot given so many of these head-scratchers largely went ignored by the larger public.  While there is certainly a path for him where Brees redeems himself and he goes on to call a Super Bowl for NBC, I’m not as sold that sometime between then and now Brees doesn’t go rogue again and finds himself in media purgatory, not that much different than Donovan McNabb and Brett Favre.

Time is on his side, but that’s only the case if Brees can not only win back some of the standing he had with many, but also shed the propensity to undo any goodwill he generates by creating a controversy entirely of his own doing. I’m not quite sure given the history, Brees continues to deserve getting the benefit of the doubt. But the reality is that those are the perks of being the backup golden boy to Peyton Manning, who seems to have a better grip on how to remain golden. If I’m NBC, I’d probably wait and see with Brees and perhaps start making eyes at JJ Watt.