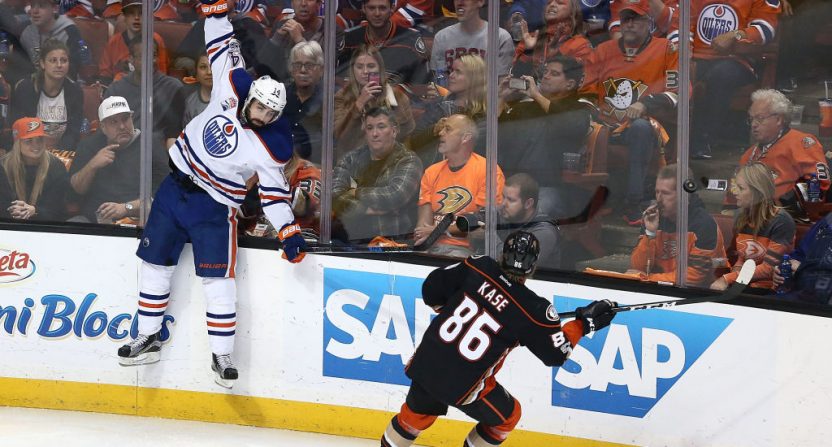 Last year’s NHL playoffs represented a peculiar moment, with zero Canadian teams presenting a huge ratings hurdle for Canadian broadcaster Rogers Sportsnet, but a theoretically huge opportunity for NBC. However, this year’s more standard setup (five out of 16 teams in the playoffs were Canadian, with two of those teams advancing to the second round) has actually worked out much better for the American broadcaster. AA’s Ken Fang noted last week that ratings were up three per cent year-over-year for NBC at that point (through 49 games), and the numbers have become even better following Wednesday night’s final second-round games. NBC announced Thursday that all games so far have averaged 988,000 viewers in total audience delivery (up 16 per cent from the 829,000 we discussed last week, and up 7 per cent from the total audience of 925,000 last year). Here are more details from their release:

And there are a few other interesting points in there about Wednesday’s Game 7 doubleheader (Pittsburgh-Washington and Edmonton-Anaheim):

Last night’s Game 7 doubleheader on NBCSN featuring the Pittsburgh Penguins-Washington Capitals and the Edmonton Oilers-Anaheim Ducks was the most-watched doubleheader in NBCSN history, averaging a TAD of 1.990 million viewers, which topped the prior record of 1.717 (5/14/14, Montreal-Boston Game 7 and Anaheim-Los Angeles, Game 6).

Penguins-Capitals is the most streamed game in NHL history, including all Stanley Cup Final games, with 15.3 million minutes and an Average Minute Audience of 88,300 viewers. It also delivered 213,000 unique devices.

So, there are several notable points there. For one thing, the Capitals-Penguins rivalry again proved to be ratings gold for NBC, and the history from last year may have helped enhance it even further this year. Game Five of that series (on NBC Saturday) was the most-watched early round game in decades, and Game Seven continued that trend, posting excellent numbers for a mid-week NBCSN game. But the part in there about the Oilers is relevant too; Canadian teams have often been viewed as bad news for NBC, as they don’t have a local market that counts in NBC’s ratings (and so many of hockey’s ratings are local-market-driven), but both second-round series involving Canadian teams (Ducks-Oilers and Rangers-Senators) drew pretty well. It definitely helps that those Canadian teams have young stars hockey fans are familiar with and interested in (Connor McDavid and Erik Karlsson in particular for those series, Auston Matthews of the Toronto Maple Leafs in particular amongst the teams that exited in the first round), but even so, it’s certainly interesting that a year with more Canadian teams is doing so well in the States. That doesn’t mean Canadian teams are great for U.S. ratings in general, as we should remember that it was Capitals-Penguins that particularly drove this, but these particular teams were certainly not destroyers of ratings, and the U.S. teams who were there last year weren’t necessarily better for ratings.

It’s also worth discussing how these ratings are somewhat flying in the face of the traditional approach to TV markets. The teams that were in the second round last year but not this year are Dallas, Tampa Bay, the New York Islanders and the San Jose Sharks. Their replacements this year were Edmonton, Ottawa, Anaheim and the Rangers. A market size approach alone would say last year’s group is better; while Anaheim is counted as in the second-largest U.S. TV market area of Los Angeles, Dallas-Fort Worth is the 5th largest, while San Francisco-Oakland-San Jose is 6th and Tampa is 11th, and Edmonton and Ottawa have no local market. Adding those numbers gives you 1.6 million extra potential local U.S. viewers last year versus this year. However, there are considerations that matter beyond that.

While both the Rangers and the Islanders play in #1 New York, it’s no great leap to say that the Rangers are the better draw. and there are plenty of people in Dallas, San Francisco and Tampa who don’t care about hockey. That’s the same with Los Angeles-Anaheim too, of course, especially considering that many of the people there might be Kings fans who don’t want to watch the Ducks; just having a big market doesn’t mean you get great ratings. In fact, Anaheim averaged the lowest local household rating in the second round (a 1.3); keep in mind that’s coming from a huge market, and that the leading 20.2 from Pittsburgh isn’t as great as it sounds when you consider it’s the 23rd-largest market, but that’s proof that market size alone isn’t the only factor.

On paper, last year’s second-round group sounded better for NBC. But in reality, this year’s group worked out better. And that’s not about number of games (higher-stakes games later in series tend to draw better ratings) either, as last year’s second round also had two six-game series and two that went seven games. That’s very good for them, especially considering that their regular-season ratings fell this year (in contrast to what we saw in Canada). We shouldn’t necessarily take too much from this, as it’s just one playoff year and a few series, but at the very least, Canadian teams don’t seem to be a ratings death knell for NBC (and all-American teams wasn’t necessarily better). They’re doing just fine with the matchups they’ve received.