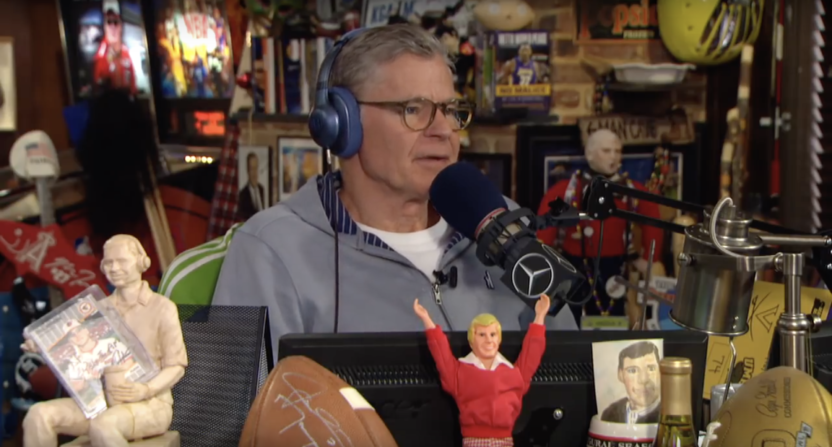 Dan Patrick critiqued the sports media industry on The Dan Patrick Show Friday. Talking about a story on Ryan Leaf discussing how he used his personal situation to determine which quarterback prospects could be busts, Patrick gave his own observations that sports media as a whole focuses on the negative because that is what gets page clicks and views. And I’m here to say that he is 100 percent correct.

In a general view of the industry, Patrick talked about how even accomplishment of Russell Westbrook averaging a triple-double this season is being talked about as a negative because he’s only padding stats and isn’t a team player.

“It feels like we’re trying to go out of our way with sports stories now. Suddenly, Russell Westbrook averaging a triple-double was a negative thing. Like, we’re really reaching for things now. ‘Russell Westbrook, oh he’s a stat-padder, he’s a ball hog.’ Wait, he averaged a triple-double, his team made the playoffs. Don’t we celebrate anything anymore?”

“It just feels like there’s a negative aspect to all these sports stories. Pretty amazing. It really is. You know, ‘Lamar Jackson, oh he hired his Mom as his agent and he’s slipping in the draft.’ Not that he was raised by a single parent to get to where he is now. Where he can be a first-round draft pick and he won the Heisman Trophy. But nobody wants to hear that.”

Patrick isn’t suggesting we always find the positive in every story. He’s saying the media gratuitously seeks out the most negative angle on a story that deserves to be celebrated and seen in a positive light.

Why is that the case? Why is it that we go negative? One reason is that it’s easy for someone starting out to do that in order to make a name for themselves in this industry. Let’s face it, the easiest way to get famous and successful is to be loud, to be negative and to say outrageous things that likely make you look like an ignorant fool. I’m not saying that’s the best way to make a name for yourself, but it’s definitely the easiest. And that isn’t exclusive to sports media. Politics, business, entertainment, whatever it is you can think of, most media industries work the same way.

This is exacerbated by “Embrace Debate” and hot take artists who get rich by saying the stupidest things loudly and confidently. Look at Skip Bayless. Let’s call Skip Bayless for what he is. He is a professional troll who hasn’t been a reporter in years and is now getting paid millions by a sports network that laid off all their writers.

Look at Stephen A. Smith. He trashed Martellus Bennett this week for saying “89 percent” of NFL players use marijuana for pain relief. Bennett tweeted “Fuck you” at Smith, and it became a story. I’m sure Smith didn’t take it personally that Bennett cursed him out in public. In fact, I’m sure it made his week that a former NFL player was so angered by what he said that it compelled him to curse on Twitter. He and his network got exactly what they wanted: publicity (including from, rightly or wrongly, this site).

For example, I could write a well-researched, 2,000 word article about how LeBron James is the most complete player of our generation because he not only wins games and championships but also incorporates his teammates, and it’s quite possible no one will read that. At the same, I could write a 200-word post titled “LeBron James is the least clutch player in NBA history,” with my only evidence being cherry-picked clips of him missing game-winners. That article, which would probably take 10 minutes to write, would be read by way more people than a story based on actual research with a well-reasoned take that I could spend a few hours on.

My perspective and Dan Patrick’s perspective of sports media are two different things (as he’s an accomplished sportscaster and I’m just starting out in the industry), but we both seem to see the same thing. Negativity rules.

I want to be a Dan Patrick, I don’t want to be a Skip Bayless. Maybe being a Skip Bayless is the path toward rich and famous, but I couldn’t do that without sounding completely fake and sacrificing my values as a person and as a professional. Given all the layoffs in sports media, and media in general, not being a hot-take artist might result in me going back to working retail. But I know that’s the only way I can do this and be proud of the work I have done. And if that doesn’t work out, so be it, I’ll find something else to do. It’s better than spending a career being negative just for the sake of being negative.