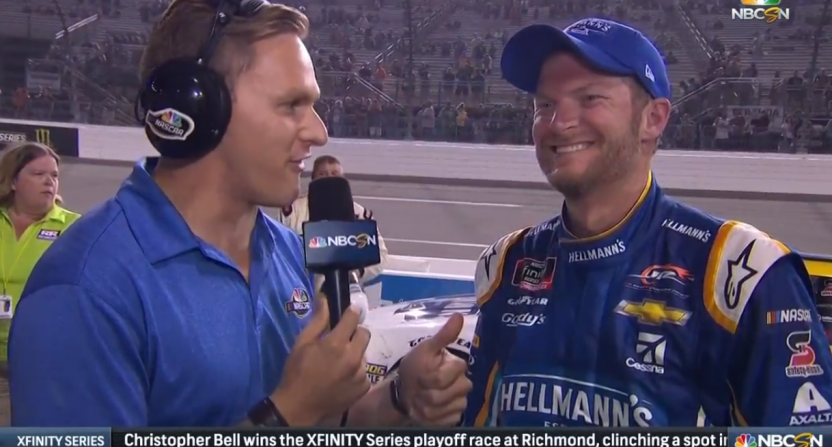 The Xfinity Series is essentially NASCAR’s AAA circuit, but tonight’s race at Richmond featured a cameo appearance from one of the biggest stars of American racing. Dale Earnhardt Jr. retired from competition after last season, joining NBC as a racing analyst (and working for NBC in other capacities, including a trip to the PyeongChang Winter Olympics.)

It was a move mostly done for sponsorship purposes; Earnhardt owns his own Xfinity team, JR Motorsports, and even promising just one race a year in the car can help boost his team’s sponsorship return. Earnhardt wasn’t expecting much tonight, and indeed his appearance was originally going to be more interesting from an in-car analyst perspective. Indeed, that’s what we got early on, as Earnhardt chatted with his former Cup crew chief Steve LeTarte about the start of the race:

There's so much happening in this 44-second video.@SteveLetarte talking to @DaleJr like old times, and Dale talking about Matt Tifft's problems from the cockpit! pic.twitter.com/W5WFggY6o2

But Earnhardt’s night got more interesting as it progressed, because his car was very good; despite not exactly racing door-to-door (Richmond was the first race of the Xfinity Series playoff, and Earnhardt had expressed his desire not to wreck an actual contender for the season-long crown) he found himself battling for and eventually taking the lead:

"That's the first stage win in my career."@DaleJr WINS Stage 2 at @RichmondRaceway! Can he hang on for the win on @NBCSN? #XfinitySeries pic.twitter.com/6iQP0lOuYB

As he noted, that was the first stage win of his career (the stage system came to NASCAR last year, so he hadn’t had a lot of chances).

But while he had a strong car and led the most laps on the night, he lost the lead on a late pit stop and never got it back, finishing his night in fourth. Still, he was in very high spirits after the race; it’s not often you see a broadcaster interview a colleague who just competed, but that’s what we got on pit road when NBC’s Parker Kligerman interviewed Earnhardt:

Earnhardt’s genuine joy is always a welcome thing, and it’s one of the reasons he’s among the most popular and likable figures in recent sports history. And as he noted in that same interview, he’s probably going to run at least one more Xfinity race next year.

NASCAR as a sport is better with Dale Jr., whether it’s in the NBC booth or on the track. Though it’s much rarer now, it’s nice that we still sometimes get the latter.