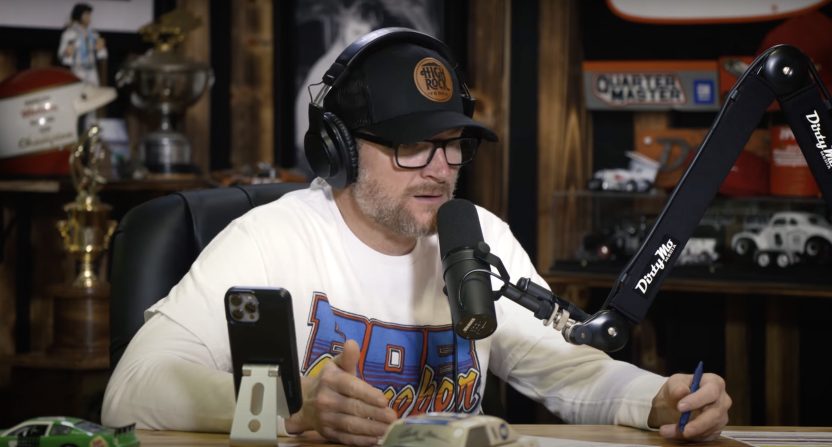 The NASCAR on NBC crew had a lot on their plate to end the 2022 NASCAR season. On the night before the NASCAR Cup Series Championship race, analyst Steve Letarte had to have emergency surgery to remove his appendix.

With Letarte missing one of the most important races of the season, the broadcast team was scrambling to change things on the fly to make things work. Letarte’s co-worker, Dale Earnhardt Jr., explained on The Dale Jr. Download what happened and how they adjusted.

“We get to the hotel after the Xfinity race on Saturday night,” Earnhardt said. “I didn’t work the booth. When I was going to my car, my rental car, after the race, Steve’s coming to get in his rental car and he’s like, ‘Man I’m tapping out, I’m going home. I’m going to bed.’ And he was by himself. We all usually travel together. He’s not with Rick [Allen] and [Jeff] Burton like usual so…alright.

So then I get with Rick and Burton and they’re like, ‘Man, he had to leave the booth multiple times and he finally had to leave, I think he didn’t even finish the race.’ So, which is, I thought, ‘Okay, this is serious.’ We get to the hotel and we’re going to grab a bite to eat. So I’m sitting with Burton and Rick and they’re like, ‘Oh, he’s going to the hospital. They’re taking him to the hospital. He’s in pain. He’s groaning and moaning.’ So they take him to the hospital and they very quickly evaluated him and decided that he needed to have his appendix removed.”

Letarte is the crew chief expert of the four-man NBC crew so he has an important job of telling viewers what the crews are thinking and what strategies might be in place during the race. Dale Jr. explained that since Letarte was going to miss the race, he spent that night rewatching March’s Phoenix race while relying on a good friend to provide him the info to be able to try and explain what might happen.

“And [Steve’s] not going to work the next race so now I’m gonna go back to the hotel room and rewatch the last race again so I can start to understand fuel strategies and how they split the second stage and what lap did they all come into pit on this third stage. I text Greg Ives [Alex Bowman’s crew chief] and he basically gave me his whole strategy for the race so I can say okay, this is all what I need to be looking for is we’re coming up on some of these milestones in the race. Help the fans understand when the guys might start coming to pit road. How the teams might do different strategies. There was a lot of great information we got.”

As if that wasn’t enough, everyone woke up to the news that Joe Gibbs Racing co-owner Coy Gibbs unexpectedly passed away in his sleep. Gibbs was a dear friend to many in the garage and on the NBC crew so while the broadcast was changing things on the fly due to Letarte’s absence, they were also in mourning for the Gibbs family.

Earnhardt revealed that despite everything that happened, he was proud of what they did on the broadcast.

“The broadcast happens and we go right into the race and we did all we did. If you watched it you saw it. I was really really proud of the work we did, without Steve.

I had my phone open, we all did. We were all on this text chain and Steve’s just piping information to us. Everything that he’s seeing. Anything that he’s thinking about. Anything that’s coming to his mind, he’s sending it in that text message and we would just, it was a lot of the same things we were thinking about but it was also keeping us, helping us understand that we were on the right track. And so that was extremely helpful. It was hard for him to be in the hotel room and not be working and watching us work. It’s like watching somebody drive your race car.

But when we got done with the broadcast, I was absolutely proud. I felt like we covered it, the strategies, anything that was exciting, any racing, any scenarios going on. I felt like that when the #9 spun across the nose of the #1 car on the restart, we covered that perfectly. Anything that happened in that race, I thought we did a great job considering Steve wasn’t there.”

For anyone who worked on the broadcast this past weekend, that Phoenix race will be something they’ll all remember and be proud of. Sometimes you never know just what you can do until you’re forced to face adversity and must overcome that. They certainly did and while I’m sure they don’t want to have another weekend like that again, they now know they can make it work under the circumstances.