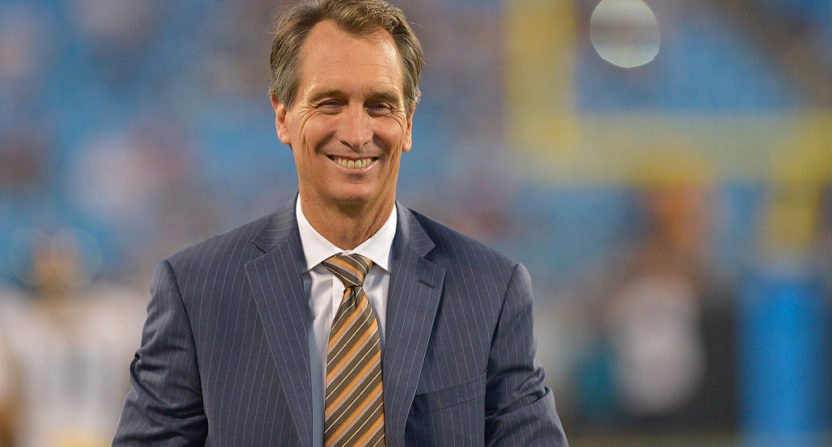 NBC analyst Cris Collinsworth has been working in sports media since 1989, has won 16 Emmys and is set to call his fourth Super Bowl this Sunday, but that wasn’t initially his post-football plan at all. In an interview with Rachel Blount of The Minneapolis Star-Tribune this week, Collinsworth said his initial plan after his NFL retirement was to get into tax law:

The former Bengals receiver began attending law school while still playing in Cincinnati. Armed with an accounting degree — and an affinity for business and tax law — Collinsworth saw his future in the legal world, even after a radio station asked him to be a fill-in host.

“[Broadcasting] seemed like a good go-between, a way to make a little money while I was finishing school,’’ he said. “But somehow, I’m still doing it.’’

Collinsworth goes on to talk about how he’s grown as a broadcaster, saying “I had no idea what I was doing when I started,” and discusses how his goal when coming onto Sunday Night Football in place of retiring analyst John Madden was not to be one of the many Madden imitators out there. And there’s high praise for him from NBC colleagues, including veteran producer Fred Gaudelli, who says “He’s not an ex-football player doing television, he’s a television broadcaster who happens to be an ex-football player.”

But the most interesting part of the story may be about how Collinsworth’s career calling NFL games almost ended soon after it started:

Collinsworth’s career shift began shortly after his 1989 retirement from the NFL, when Cincinnati radio station WLW asked him to do an hour of sports-talk radio as a fill-in for host Bob Trumpy. That led to doing features for HBO’s “Inside The NFL,’’ then to a four-game stint as an NFL and college game analyst at NBC.

Though Collinsworth finished his law degree, he turned out to be a lousy negotiator; when he demanded that NBC double his salary to $3,000 per game, the network cut him loose. He was gone only a year before returning, winning his first Emmy in 1997. Collinsworth spent part of his career at Fox before coming back to NBC in 2006.

That demand to double his salary may not have worked out for Collinsworth at the time, and in many cases, that might have led to the end of a broadcasting career. And Collinsworth probably would have been fine if it was; maybe there’s an alternate universe out there where he’s a successful tax law attorney instead of one of the most recognizable NFL commentators around. But his return to broadcasting appears to have gone pretty well for him, for the networks that employ him, and for many fans. And at 59, Collinsworth may be doing this for years and years to come. Sports media has turned out to be much more than a go-between for him, even if that wasn’t the plan at first.