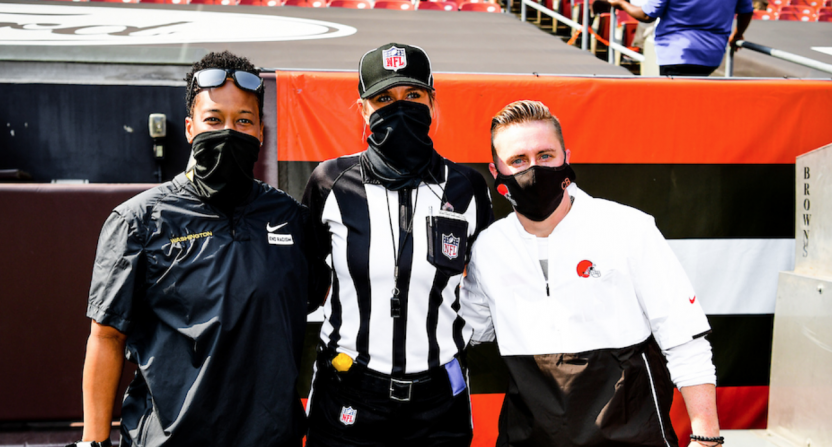 NBC Sports analyst Cris Collinsworth took to Twitter late last night to apologize for comments he made during the Wednesday afternoon broadcast of the Baltimore Ravens-Pittsburgh Steelers game.

His comments are shown and transcribed below.

Collinsworth comments here caused an uproar which he later apologized for pic.twitter.com/SQEojZZesQ

“Everybody’s a fan, in particular the ladies that I met. They had really specific questions about the game and I’m like, ‘Wow.’You’re just blown away about how strong the fans are here in this town.”

Collinsworth issued an apology following backlash from some noteworthy individuals. Here’s some of that:

So far this year, Cris Collinsworth has made fun of wearing masks and seems stunned that "ladies" know about football. Maybe @NFL could fill him in about their viewership demographics. He seems to be a newbie to this game.

Dear Cris Collinsworth, I have some really specific questions about your sexism https://t.co/2MhZyZa7Ry

Still shaking my head that Collinsworth was shocked that women know and watch football and that we “have specific questions about the game”. Someone please tell Cris we do have TVs in the kitchen. ?

From @hemjhaveri: "…no dude should seem surprised that women are knowledgeable about things! That’s just a good rule to follow, whether you are talking about sports or woodworking or interior design or engineering or cooking or astrophysics or whatever." https://t.co/MRasOnZ9Z5

Countless women enjoy and have a deep knowledge of football. Cris Collinsworth saying he's blown away that women in Pittsburgh ask specific football questions was not good.

Collinsworth’s comments were and are indefensible.  Given that it’s 2020,  we’re already seeing the usual suspects, from the unsavory corners of the sports media ecosystem coming to his defense and bemoaning “cancel culture.” I assure all of those concerned Collinsworth will not be exiting NBC anytime soon.

What’s most jarring is that Collinsworth seems totally unaware of the snowballing significance of female viewership, participation, and representation in football as a whole. Last weekend we had the Sarah Fuller story, which on one hand was inspiring to see and celebrated by many, but on the other hand became the culture wars topic du jour as aforementioned bad actors were quick to label it a publicity stunt. The latter reinforces the antiquated notion that there is no place for women in football and Collinsworth’s comments dovetail with and extend that sentiment.

Meanwhile the NFL and its partners are actively (and hopefully wholeheartedly) looking to change that perception.  In addition to Sarah Fuller, we had Callie Brownson become the  first woman to be a position coach for an NFL team this past weekend. In what is hopefully a growing trend, we’re beginning to see women in male-dominated roles across the league, spanning officiating, coaching, and in media.

Today's game marks the first regular-season game in @NFL history to have a female coach on both sidelines + a female official.#WASvsCLE pic.twitter.com/MlTOWHACXM

We’ve additionally seen improved female representation in NFL sports media with Beth Mowins calling games , the first all female announcing booth, and this prominent commercial featuring Katie Sowers which was one of the most played ads last season.

Beyond these recent stories of increased women’s representation in football, the data points to women being a key demographic for the NFL. For the last decade, female viewers have been the NFL’s fastest-growing segment, as Sports Business Journal relayed last October:

“NFL ratings numbers continue to show that women are the “fastest-growing segment” of the league’s viewing fanbase, according to Tara Sullivan of the BOSTON GLOBE. Fox Sports Exec VP and Head of Strategy & Analytics Mike Mulvihill said, “What we’re seeing is not only is women’s viewership up, but it’s up at a greater rate than that of men.” Through Week 5 at Fox, Mulvihill said that the Sunday NFL package is up 9% among women viewers in the 25-54 demographic and 5% among men, and that the “TNF” package is up 17% among women and 9% among men. Sullivan notes those numbers are “impossible to ignore.” Mulvihill: “We’ve been paying close attention to the trend among female viewers because I feel like it’s going to have an impact on our future goals of the business of the NFL. I’m not terribly surprised by it because I feel it’s a trend that’s been a long time coming”

NFL broadcasts were once a bastion of scantily-dressed women in Go Daddy and Miller Lite ads, but the league has seemingly come to the realization that they’re better-served by shedding the stereotypes of years past. They’re also working to highlight breakthroughs in female representation within the sport. But Collinsworth’s comments are another reminder of just how much work the NFL has to do in making the sport more inclusive and welcoming to women who have long felt that they didn’t belong.