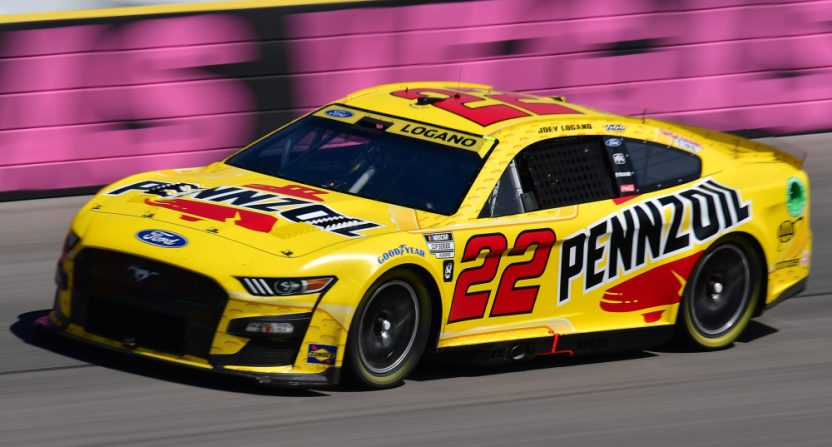 Imagine if one of the major male sports leagues had created its own version of the wildly successful Formula 1: Drive to Survive series on Netflix only to barely register to the hardcore fans, let alone the average sports fan, for a myriad of reasons. That’s what has happened with a docuseries both NASCAR and broadcasting partner NBC has contended with as the 2022 race season draws to a close.

Earlier in October, Adam Stern of the Sports Business Journal reported that NBCUniversal agreed to start streaming Race to the Championship, NASCAR’s docuseries that chronicles the push towards and during the racing circuit’s playoffs.

.@NBCUniversal has agreed to start streaming NASCAR’s “Race For The Championship” docuseries on @Peacock, a boost to the prospects of the show.

? The move, which starts tomorrow, is important for @NASCAR as the show has posted mostly meager ratings up to now on @USA_Network. pic.twitter.com/d0INGuOL3R

It was one big “FINALLY!” for those who have been watching the series since its debut on the linear USA Network back on September 1st. (As other shows that appear on multiple channels in the NBCU orbit, Race has also been shown on sister channel Bravo, which could not have a more different audience than NASCAR.)

With limited viewership data available, it’s hard to glean a lot of trends on how the series is truly performing with different age groups. The only publicly available demo group is for ages 18-49, which along with people ages 25-54, remains a traditional demographic that advertising sales are sold on for linear TV.

That said, the October 6th episode, the first new one was made available on Peacock, lost 25% of the linear 18-49 audience, dropping to 39,200 from 52,200 on September 29th. Those two weeks were the first declines of the demo as the 18-49 audience didn’t budge at all while the series viewership dropped throughout the first four weeks, averaging just over 78,000 viewers. The last two editions garnered 65,300 and 52,200 viewers, respectively.

Without specific data from Peacock, it’s difficult to determine the show’s audience numbers, including if and how much of the linear audience has migrated to the streaming service, the ages of those who may have flipped, or even how many people initially came upon Race on Peacock itself and not USA. Yet it’s not hard to conclude that Race has a bump from streaming as the linear ratings haven’t fallen off a cliff since Peacock added the show.

Since NBC Sports Network’s shutdown, USA has acted as Comcast/NBCU’s linear stand-in, with sports content essentially carrying the channel. WWE’s Monday Night Raw and NXT, along with live NASCAR races, rank among the highest-rated programming on the network, though Raw is the only program that clears one million total viewers on average. In fact, just two of its top 15 programs are non-sports – Chucky and Dr. Death. However, as nearly all of cable, USA has stumbled mightily, going from its heyday as a ‘broadcast replacement’ option in the Aughts to just outside of the top 20 most watched channels in the country.

Of course, there’s also an NFL-sized elephant in the room as the normally safe bet for other sports programming is to stay away from Thursday Night Football. Amazon’s Prime Video has been able to tout some strong figures in the first few weeks of its exclusive deal with the NFL, even if Al Michaels might bemoan the quality of some recent games. Yet with NASCAR’s older audience skew, it appeared that NBCUniversal had planned to capitalize on the schism created by TNF moving to a streaming service. The thinking could have been that there were enough NFL fans without access to Prime Video who may be looking for a sporting alternative.

Like any major sporting entity, NASCAR has looked at reality-styled programming as an avenue to promote itself beyond its traditional audience. Perhaps no one has done that more than 23XI driver Bubba Wallace, who has done shows on BET, Facebook Watch, and this past summer, Netflix. Race, in particular, gives faithful fans a deeper glimpse into the racers they thought they knew well (veterans like Kyle Busch) as well as the much-hyped next generation of drivers who have grown up in a world of ubiquitous cameras.

Yet there’s much to be said about the rollout of the show. Should it have been treated like actual sporting events and have streamed live on Peacock alongside USA from the outset? Should it have gone up on the streamer after the initial linear airings instead of the pivot several weeks in? Would have it even been worthwhile to air Race as part of the pre-race show, especially since the show is specifically about NASCAR’s actual postseason?

NASCAR might not pop the champagne over what looks to be a belated shift in viewing strategy. Yet with only two episodes remaining – and just three more race weeks left in the actual season – there are certainly some questions and valuable lessons to carry forward in 2023.