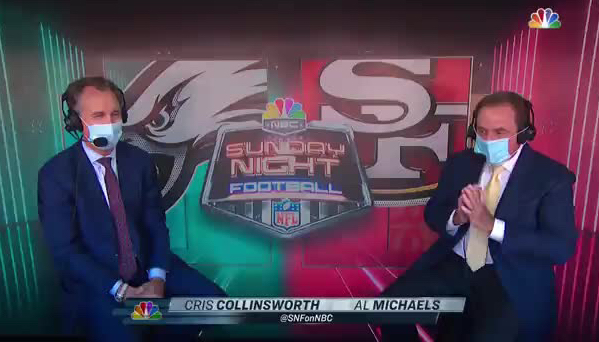 If Al Michaels and Cris Collinsworth sounded a bit muffled during NBC’s Eagles-49ers Sunday Night Football telecast, it wasn’t due to bad audio.

The broadcasting duo were asked to wear masks while announcing the game at the 49ers’ home, Levi’s Stadium, by Santa Clara county officials. Collinsworth and Michaels were on camera wearing surgical masks during their introduction, with Michaels making a “Masked Singer” joke before explaining why that was — though the health and safety reasons for the request were rather obvious in this time of COVID-19.

(Had NBC known this would happen, maybe some branded masks could have been provided beforehand. Missed opportunity there. )

Neither Michaels nor Collinsworth seemed particularly thrilled about having to mask up during the broadcast. After being introduced, Collinsworth groused, “I don’t know who I am.” Michaels then teased him about making sure to enunciate properly since his mouth was obscured.

While talking about Nick Mullins playing quarterback for the 49ers in place of Jimmy Garoppolo, Collinsworth’s mask slipped below his nose, something many of us have surely experienced. Why he didn’t just move the mask up over his nose isn’t clear. Maybe Collinsworth didn’t want to touch his face on-air or perhaps he just wanted to finish his intro without fidgeting.

Cris Collinsworth letting that mask slip under his nose ? pic.twitter.com/msZDnrbBGu

Also dealing with some mask slippage was reporter Michele Tafoya while detailing the Eagles’ myriad injuries among their offensive line and wide receivers. Getting the right fit has been difficult for many of us.

Normally, TV is so concerned with appearances that you’d guess producers and on-air talent would get that right before going live. But at least with Michaels and Collinsworth, they were asked to wear masks shortly before broadcast.

As the New York Daily News‘ Dennis Young pointed out, the SNF broadcast crew couldn’t resist snarking about being forced to wear masks toward the end of the telecast.

“We’re good boys, though,” said Michaels at one point. “We’re going to get lollipops at the end of the game tonight.” Those who have to — or choose to — wear masks for safety surely sympathized.

Collinsworth also complained that his ears hurt from the elastic loops around his ears. He should’ve followed his partner’s lead in stretching the ear loops around his headphones, rather than his ears. Maybe that tighter stretch would’ve kept the mask from slipping too. 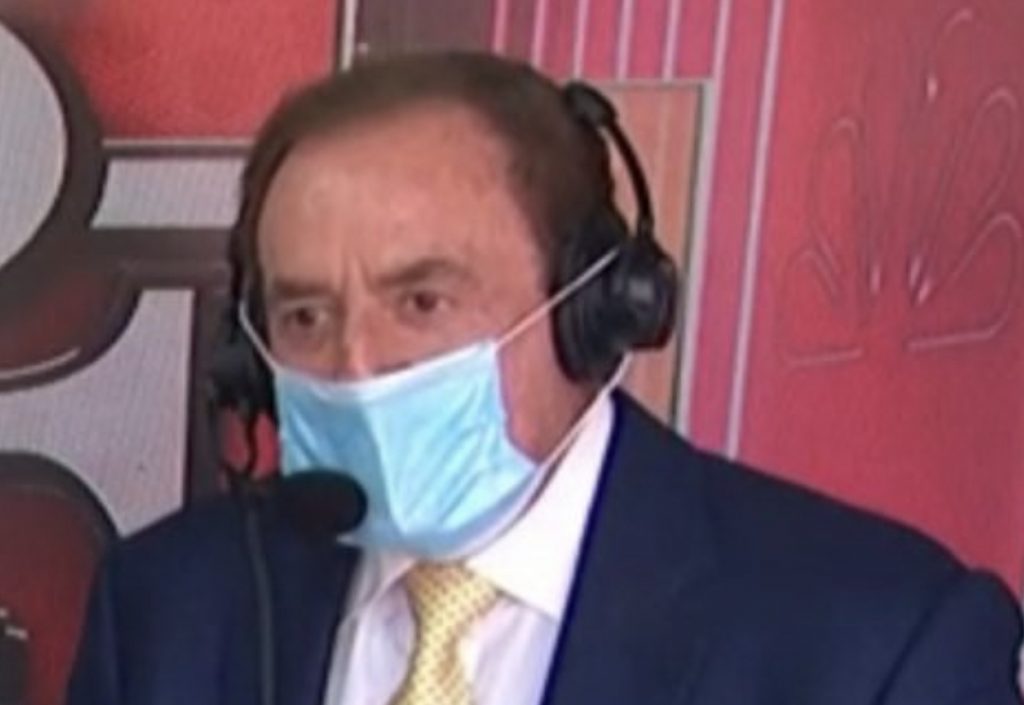 Santa Clara county chief executive Jeffrey Smith confirmed that Michaels and Collinsworth were asked to wear masks, telling the San Francisco Chronicle, “We wouldn’t want them to end up like the president.”

Just to underline the point for viewers, Michaels made it clear that he couldn’t wait to ditch his mask after the SNF telecast signed off.

“We’ll get rid of these things as soon as we possibly can,” he said.

The snark in the SNF booth wasn’t solely reserved for wearing masks and Santa Clara county officials, however. In the fourth quarter, Collinsworth zinged ESPN’s efforts to get Tony Romo for the Monday Night Football booth while he and Michaels discussed Week 4’s Patriots-Chiefs matchup being moved to Monday on CBS.

Collinsworth sprinkling in some sports media shade in tonight and we absolutely love It pic.twitter.com/QHbtXGfbuv