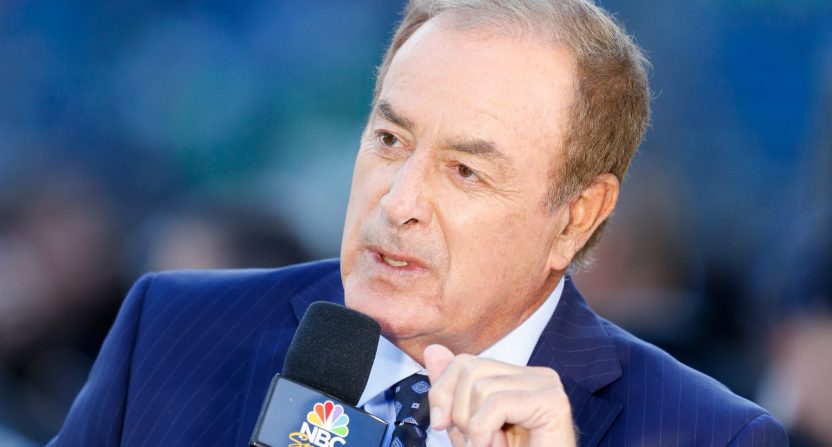 For years, the NFL (and almost every other sports league) shunned gambling and the only gambling talk during sporting events would consist of subtle references from guys like Al Michaels and Brent Musburger.

“The Rascal,” as Michaels likes to refer to his gambling side, would slip in an occasional gambling reference if a game was truly “OVER” or that something was “UNDER-whelming” or that a certain number was of interest to some fans. Al knew that when a SNF game was a blowout and the only people likely watching are the gamblers, he made sure they were taken care of.

Times are different now. Now that politicians and sports leagues realized they could make lots of money, they are embracing sports betting like never before. Each day that goes by it seems there’s a new sports gambling show and the NFL is developing their own gambling content and forging partnerships with various sports books.

This embrace of sports betting should make a gambler like Al Michaels happy but it’s actually a bit complicated.

While on an NBC conference call for Sunday Night Football, Michaels revealed that making gambling references on the air won’t be as much fun now that gambling is being openly embraced.

Michaels on NFL's embrace of gambling and his references to the point spreads:

"Now I guess they're allowing me to come in the front door, which is not as much fun as kind of doing it subtly."

Al makes a good point. A lot of the fun with his references came from the “taboo” of it all but now that it’s out in the open like it is, it’s just information at this point.

Michaels then got serious about gambling, both in its coverage as well as in-game betting. For instance, Al had concerns about in-game betting being a problem for potential addicts.

SNF play-by-play voice Al Michaels draws a big line between a single wager on a result and in-game prop betting, suggesting the latter seems like a path toward problems for addictive personalities

Again, Michaels makes some good points. While gambling shows are the newest popular thing and has its place now that sports betting is legal in more and more states, it’s still illegal in many states and even in states where it’s legal, it only allow in-person betting. Chances are, the majority of the viewing audience can’t place a bet even if they wanted to. And if they are betting, like Michaels points out, they probably already know what they need to know by the time the game starts.

In terms of Michaels’ thoughts on in-game betting, while one can make the argument that legal gambling can also result in addiction, in-game betting is on another level. When you place a bet before a game, you have at least three hours in between placing the bet and knowing whether or not you’re going to win. When I go to Vegas and it’s during the NFL season, I’ll go to a sportsbook and place $20 on a team in each game and watch how things play out. I’ll win some, I’ll lose some, but it’s a great way to spend a Sunday afternoon without going broke like I would have done if I played the slots for a few hours.

In-game betting, if you’re not careful and you get on a losing streak, you can lose a lot of money very quickly without realizing until it’s too late. Either way, it’s a new gambling frontier and it’ll be more than just Al Michaels discussing gambling now.