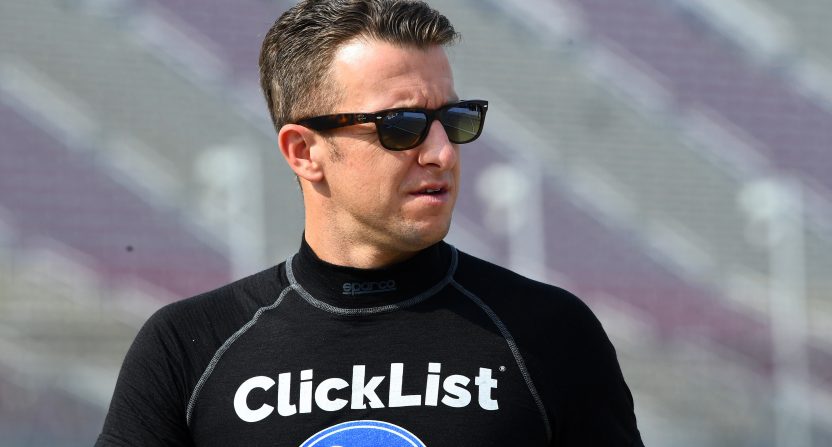 A.J. Allmendinger ended his 2018 NASCAR season with a bunch of unknowns. After 13 seasons in NASCAR, Allmendinger would be out of a permanent ride and while he has had a versatile career in multiple forms of racing, it was uncertain if he would find another full time ride.

But as one door closes, another opens, and Allmendinger was hired by NBC to be a booth analyst for the upcoming IMSA season and contribute in the studio on NASCAR America during the week. While this probably means Allmendinger’s racing career will take a step back, NBC is a perfect place for someone like him. Since taking over NASCAR rights, NBC has been beefing up their motorsports slate. They now have exclusive IndyCar rights and will start broadcasting IMSA and Supercross next year.

Allmendinger is an ideal analyst for NBC based on his experience. He has been in NASCAR and competed in sports cars since 2006, winning overall in the Rolex 24 at Daytona in 2012 in addition to racing in open wheel before trying NASCAR. Allmendinger came back to IndyCar in 2013 and finished 7th in the Indianapolis 500.

Allmendinger has the knowledge to be on NASCAR, IndyCar and IMSA broadcasts wherever NBC needs him. And while he may not be racing as much now, that doesn’t mean his racing career is completely over. For instance, Allmendinger will be pulling double duty on the weekend of January 26 during his first race broadcast with NBC, competing in the Rolex 24 at Daytona and working for NBC whenever he’s out of the car.

NBC has been cool with letting their on-air talent go out and race. NASCAR analyst Dale Earnhardt Jr. raced in an Xfinity Series race last year and plans to do another race in 2019. NASCAR pit reporter Parker Kligerman occasionally races in NASCAR whenever he gets an opportunity, which has led to some great and not-so-great stories. IndyCar analyst Townsend Bell occasionally races in the Indy 500 and 24 Hours of Le Mans among other forms of racing. In 2016, Bell was near the front at Indy throughout the entire race until a pit accident toward the end put him two laps down.

So when it comes to A.J. Allmendinger, he really has options both on and off the track right now. While the majority of NBC’s on-air talent are experts on one racing series, Allmendinger is an expert in at least three and can be an effective crossover star for the company and their growing motorsports portfolio going forward. In addition, if a ride opens up and someone calls Allmendinger about getting behind the wheel, that option is available as well. It’s really going to be interesting to see how Allmendinger adapts to broadcasting and how NBC utilizes his knowledge on their multiple motorsports properties.