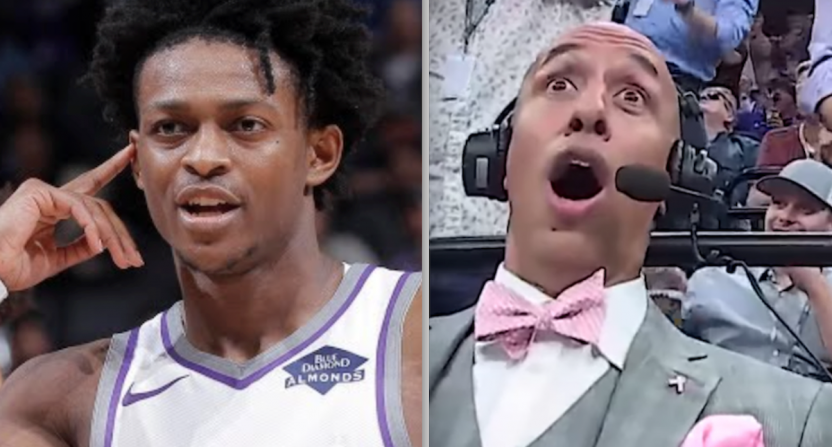 The Sacramento Kings and Denver Nuggets played to a thrilling finish at Ball Arena Wednesday night. If you missed it or haven’t yet caught the highlights, the Kings tied the game in the final seconds before a buzzer-beating tip-in by Buddy Hield resulted in a 124-122 victory.

But Sacramento wouldn’t have been in a position to win the game if not for a spectacular block by De’Aaron Fox, who fought through a pick by Nikola Jokic and recovered behind Will Barton to block his shot. Had Barton scored the layup, Denver would’ve taken a four-point lead and probably won the game. Instead, the block led to a fast-break basket by Harrison Barnes.

Yet Fox’s block was even more memorable, thanks to the call from NBC Sports California TV analyst Doug Christie.

Also amusing was play-by-play man Mark Jones following up Christie’s line with “That was clean.” Presumably, he was referring to Fox’s block, which only touched the ball and no other part of Barton’s body. Nor did Fox collide with Barton on the play. But the response also works for pointing out that Christie didn’t actually say a profanity on the air.

In his third season on the Kings’ broadcast team, Christie has had some time to think of clever puns to use with Fox’s name. And he picked the right moment to break out the one he used Wednesday, whether it was one he thought up himself or was suggested to him.

The Kings were ultimately rewarded by the effort from Fox (and Barnes). Sacramento earned its first victory of the 2020-21 season when Hield followed up a missed dunk by Barnes to tip in the winning basket. Check out that play, accompanied by a strong call from Jones:

“Buddy! Ball! Call! Game! Run, Buddy, Run!” yelled Jones as Hield sprinted off the court and to the locker room following his game-winning shot. Beating the Nuggets, who made it to the Western Conference Finals last season, in their home arena was also impressive.

What a finish for Jones to call for the first game of his first season as the new play-by-play broadcaster for the Kings. He might not get anything more exciting in Sacramento’s remaining 71 games.