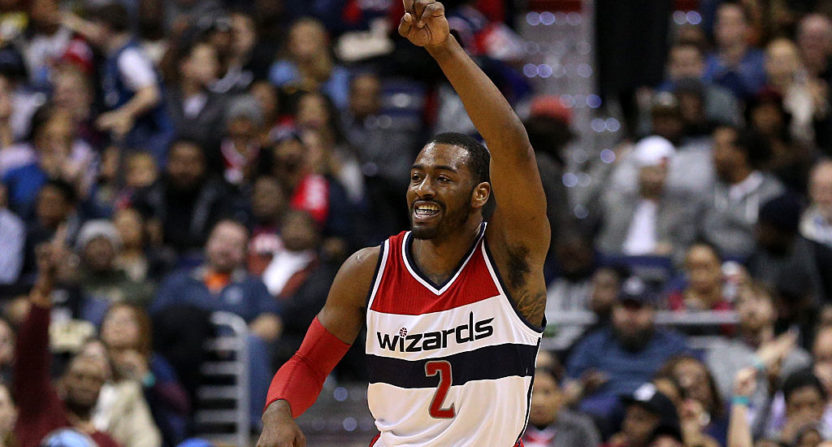 Six and a half years ago, Colin Cowherd went on a dumb, offensive rant about John Wall, alleging that because the point guard danced before his NBA debut he was selfish and a bad teammate. Shortly after that, he attributed Wall’s supposed personality defects to growing up without a father.

Since then, as Cowherd has moved from ESPN to FS1, he has defended or doubled down on his criticism of Wall just often enough that we’re still talking about it.

Now Wall is a perennial NBA All-Star and the leader of a Wizards team that’s one game away from the Eastern Conference Finals. In Game 6 of the Wizards’ series against the Celtics, he hit a game-winning pull-up 3-pointer with seconds to play to stave off elimination.

And on Saturday, days after another senseless Cowherd diatribe against Wall, Wizards beat writer Chris Miller put his foot down. In a minute-long stand-up on CSN, Miller ripped Cowherd and defended Wall. Here’s what he said:

I’ve seen this kid since Day One, and I’ve seen all the hate and vitriol that goes his way, and all he does it go out and play. Here’s the one reason I think Colin Cowherd has missed it since Day One. Go ask his teammates what John Wall is all about. Why don’t you go ask those kids in Southeast D.C. that John Wall has put hundreds of thousands of dollars into supporting their schools so they can get a better education. Go ask them about John Wall. And maybe more importantly, go ask the teammates that are no longer here that are enjoying big-time contracts because they played for somebody that wasn’t selfish and got their teammates involved. He gets players paid because he cares. And for Colin Cowherd, since Day One, since John Wall did the Dougie in his season-opening game, to want to continue this narrative, is stupid. Because you don’t have nothing else to say. Because until you’re in that locker room and until you talk to John Wall and the people around him, just save that narrative for another day. I’m tired of it.

john wall had the dagger last night.@cmillsCSN had one for colin cowherd, too. pic.twitter.com/FE4QjLtSBR

As Miller went on, he seemed to get more and more serious, and at times he even sounded emotional. Miller is one of many people on the ground in D.C. who, having interacted with Wall for years, categorically rejects Cowherd’s idea (shared by pretty much no one else) that the point guard is selfish or egotistic.

Of course, while Miller’s defense of Wall and rebuke of Cowherd is awfully satisfying, it’s not going to end the Cowherd-Wall saga.

In fact, Cowherd is likely watching Twitter blow up with praise for Miller and smiling. Because his criticism of Wall was never about being thoughtful or sensible, it was about being provocative. And judging by the fact we’re all still mad about it years later, it seems he has succeeded.