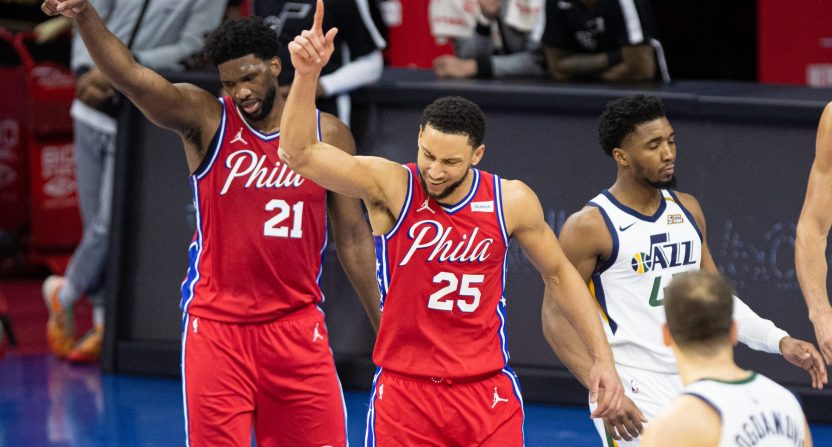 Wizards play-by-play announcer Justin Kutcher is not a fan of Ben Simmons. That much is clear.

Simmons, who was recently named an NBA All-Star but missed the game due to contact tracing, is currently dealing with COVID-19 protocols before he can return. While his stat line remains solid, the fourth-year Philadelphia Sixers star has definitely picked up a fair share of detractors. He’s prone to making questionable turnovers and has been accused of being less than aggressive at times. Still, Simmons remains one of the NBA’s best passers and is in line to potentially win Defensive Player of the Year.

Even though Simmons was unavailable to play in Friday night’s game against the Washington Wizards, that certainly didn’t stop Kutcher, who joined the Wizards booth in 2019, from lobbing some very direct bombs in his direction in an attempt to encapsulate his feelings over Tobias Harris’s All-Star snub.

I’m gonna need y’all to listen to this pic.twitter.com/3XLaNBypkp

“I’ve said it before and I know I’ll take flack for it…I think Ben Simmons is one of, if not the most, overrated players in the NBA. And he’s gotten so much love and attention that people aren’t paying attention to what Tobias Harris is actually doing on the floor.”

Not one to back down, Kutcher also took to Twitter following the game to double down.

Yep, I said that Ben Simmons is one of the most overrated plyrs in the NBA, and I stand by it. I didn’t say he was BAD, just not as good as everyone makes him out to be. GREAT defender, potential DPOY, but I think he’s made All League/All Star Teams based on hype. And..goodnight

With that, he dropped the mic and walked away, though not before responding to pushback from a former NBA scout.

Right back at ya

While there might be a point to be discussed in there regarding Simmons’s overall value, sometimes how you make your point can overshadow what the point actually is. And that seems like the case here as the overwhelming sentiment from others appears to be that Simmons may be many things, but overrated isn’t really one of them. And while Tobias Harris probably deserved to be an All-Star, that wasn’t Simmons’s fault and he didn’t quite deserve that kind of dragging.

This is Jusuf Nurkic and Robert Covington talking about Wiz announcer Justin Kutcher after his comments calling Ben Simmons the most overrated player in the league went viral tonight lmao. Wizards taking L's on all fronts this year. ? pic.twitter.com/rlaWOmFy1D

Did he just say that Ben Simmons is the most overrated player in the league? Shame on him. This gotta be the most disturbing thing I’ve heard all year. He do realize that Simmons is the front runner for DPOY?! #ridiculous https://t.co/KGTYCjSP46

How tf you call someone potential DPOY and then say he makes All Star/All NBA based on hype? You anybody https://t.co/JU5JVUdUrr

Yeah they often say some very suspect things in the Wizards broadcast. I finally got strongly irritated today and watched the rest of the game Muted. Ben Simmons is obviously one of the best young players in the league despite his issues with the deep ball. https://t.co/geeL5PFacF

The Sixers, who are currently 26-12 and in first place in the Eastern Conference, and who finished their season sweep of the Wizards on Friday, seem to be in pretty good shape, regardless of how Ben Simmons is perceived.