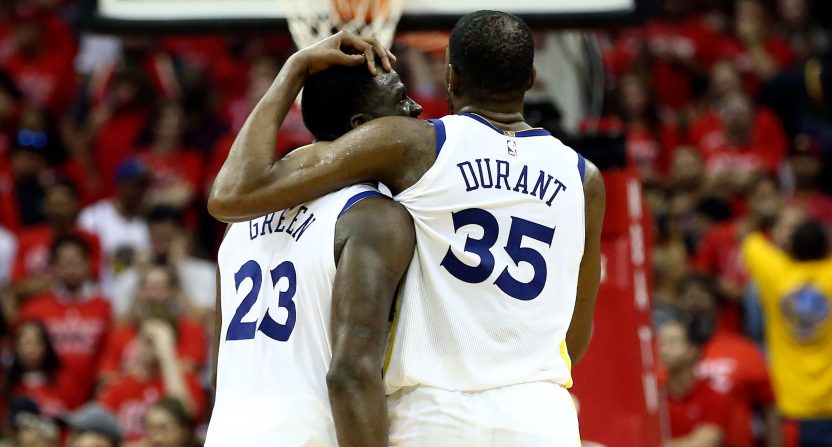 For the fourth straight year, the NBA season will end with a Warriors-Cavs matchup in the NBA Finals. WHEEEE!!

The last three matchups between these two teams have drawn similar, strong viewership numbers, all over 20 million, after the league hadn’t hit that mark since 1998. The Conference Finals this year have also done quite well, hitting ridiculous highs in both the East and the West.

What do you think the average viewership will be this year? Will it fall into that same 20 millionish bucket, or be higher or lower?

Andrew Bucholtz: I think viewership may stay around the same or even rise. Yes, there are plenty of logical reasons why this matchup doesn’t look as appealing to fans looking for good games, especially if it winds up lopsided, but ratings history suggests there are also large numbers of people who enjoy watching dominant teams and performances. The Warriors also don’t seem invincible right now, and for all the issues with Cleveland, LeBron’s having a hell of a playoff run, so we could even get a somewhat-close series.

But regardless of what happens in the series, I think it will do well in the ratings. The NBA’s so popular right now, and people are so into the storylines and into these teams, as shown by the rising playoff ratings so far. Even if some fatigued viewers leave, I think we’ll see lots of others tuning in, and that should be enough to at least keep the ratings even. Maybe it will even be enough to produce some growth.

Matt Clapp: Lower. For the first time, I think viewer fatigue is very much going to be a thing, and there aren’t the compelling reasons for non-hoops junkies to tune in.

The Warriors are massive, massive favorites. Much more than they’ve been in any of these four meetings with the Cavs. And the Western Conference Finals were essentially viewed as the Finals. Barring a stunning performance from the Cavs, the buzz won’t match the buzz for Games 1, 6, and 7 of the Rockets-Warriors series. This series is likely going to be over in four or five games, and assuming the Warriors jump out to a 2-0 lead in the series (they’re 12-point (!) favorites in Game 1), the interest in series will be lost for many people by Game 3.

In 2016, the Warriors broke the 1995-96 Bulls’ record for regular-season wins, and fans wanted to see if they could then win the title like the Bulls did. The Warriors and Cavs delivered an incredible seven-game series, with the Cavs facing elimination for the final three games and LeBron leading them to a stunning championship. This interested people that didn’t even care about basketball.

In 2017, the Warriors were extremely motivated after shockingly not winning the title the year before, and had added Kevin Durant over the offseason to get past LeBron and the Cavs this time. Again, there were tons of storylines.

Ken Fang: I’m going to be the contrarian and say the viewership will be once again over 20 million for the series and do well for ABC.

People are saying they’re tired of seeing Cleveland and Golden State back in the Finals, but if the Cavs can make some magic happen, there will be some momentum. Even if the Warriors make this a runaway, people will still watch.

This series reminds me of the analysts who said Apple’s iPhone X sales would stagnate or drop, only to see them do better than expected. I feel the Cavs-Warriors series will still be compelling television and bring out viewers. If we’re not careful, we may even see another viewership record.

Ben Koo: NBA ratings have been trending up through both the regular season and the playoffs, so there is some hope that we could see that continue into the Finals.

The only way I see that happening is if the Cavs steal one of the first two games. If the Warriors go up 2-0, I think most people will begin to tune out. You don’t have to be a basketball diehard to project how this one will play out. Since the Cavs knocked off the Warriors two years ago, we got a rubber match with Kevin Durant brought into the fold to really tilt the balance of talent towards the Warriors. The Cavs have since lost Kyrie Irving, so it’s hard to expect this series being that close.

I just moved from the Bay Area to Ohio and I can say that fans from both areas seem to have mild enthusiasm for this series, with the expectation that this might get to a fifth game. I’ll certainly watch some, but I’m not going to plan my nights around this series, and I think that’s the popular thinking.

Alex Putterman: I’ll actually say ratings will be about even with last year (which was a touch lower than the previous two years).

Yes, there will be viewer fatigue, and yes, this series could end quickly. But the story of these playoffs ratings-wise has been strong numbers despite blowout games and (sometimes) short series. For example, all logic would have suggested that, given injuries to star players and lack of competitiveness, the conference semifinals would have hit record lows. Instead, ESPN and TNT pulled their best ratings for that round since 2013. People are just really into pro basketball right now.

I also think this coming NBA Finals series could be a touch more competitive than people expect. Obviously the Warriors are heavy favorites, but for much of the conference finals, they did not look like the typical Golden State powerhouse. I expect LeBron to steal a game and maybe even two, which could even elevate this series over last year’s five-game demolition.

Jay Rigdon: Viewership is going to be noticeably lower this year. While the rest of these disappointing playoffs have been bulletproof (or blowout proof) in the ratings, the Finals are going to be a different story.

It’s simple: it’s going to be a sweep. Maybe five games, but probably a sweep. This is the biggest mismatch in the Finals in a very long time, and while LeBron is awesome, the result is going to be apparent very early in the series.

Games 6 and 7 are not going to be necessary, and these games are where the biggest ratings are. That’s going to hurt the overall average. It’s still going to do solid numbers, because it’s LeBron vs. the Warriors, but it’s not going to be higher.

Matt Yoder: I think it’ll be lower for the simple fact that A) nobody outside Ohio (and even a good chunk of people in the Buckeye state) is really giving Cleveland a legitimate chance to contend in this series and B) it’s likely going to be a short series. Last year’s series had the draw of breaking the 1-1 tie from two compelling series the two years before. This year will be all about LeBron versus the world. That’s still going to draw a really good number for the NBA of course, but probably not on par with where we’ve been the last three years.