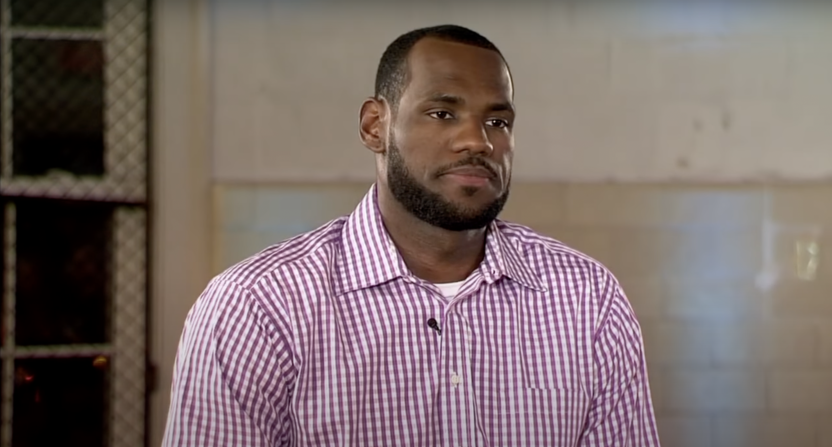 The “butterfly effect” is when even a small change could result in larger changes in the future. Sports are no exception to that phenomenon. There have been so many monumental, history-defining moments in sports but if some of those moments hadn’t happened or if their outcome had been different, our view of sports as we know it may be vastly different. “What if…” looks at some of these big moments and speculates on how that sport, or maybe sports in general, may look if the outcome had been different. This week, we take a look at what might have happened had LeBron James not done ‘The Decision.’ Future installments will be on Awful Announcing and The Comeback.

LeBron James came into the NBA with unlimited hype and expectations. When he left high school to join the NBA in 2003, LeBron was such a “can’t miss” prospect that it was a no-brainer that the team with the first pick was going to draft him.

That team turned out to be the Cleveland Cavaliers, which may or may not have been the market the NBA ideally wanted him going to, but Cleveland was an ideal destination for the Akron native. While at Cleveland, James not only lived up to the hype, but he pretty much put the team on his back. In his third season, LeBron led the Cavs to the playoffs and made the NBA Finals in 2007.

As the years went on and Cleveland kept falling just short of winning the title, the whispers crept in. “Can LeBron win the big one?” “Is LeBron overrated?” “Can LeBron get anywhere close to doing what MJ did?” After seven seasons in Cleveland, LeBron became an unrestricted free agent. This began a dilemma for James. Do I stay home and try and get my hometown team its first title (and risk not winning one) or do I go to a better team and have a better chance at winning a championship?

The summer of 2010 was all about LeBron and where he was going to go. At the time, six teams were rumored to sign James (the Bulls, Cavs, Clippers, Heat, Knicks, and Nets). A few days before the announcement, reports of Chris Bosh joining the Heat surfaced, leading to the talk about James heading to Miami.

Similar to high school athletes announcing where they’re going to college, it was revealed that LeBron would make his announcement in a prime time special on ESPN. The Decision was born and on July 8, LeBron sat down with Jim Gray to reveal that he was “taking his talents to South Beach” and join the Miami Heat.

Understandably, people in Cleveland felt betrayed that their hometown star left them, and did everything from burning LeBron jerseys to posting open letters in Comic Sans.

The Decision was a pivotal moment in LeBron’s career and maybe the NBA as a whole. The Heat weren’t the original “Big Three,” but that move perhaps cemented a trend throughout the next decade of most teams needing at least three superstars in order to win a title. In his four seasons with the Heat, the “Big Three” of LeBron, Chris Bosh, and Dwyane Wade made it to the NBA Finals each season, winning two and losing two. The move vaulted James to superstardom and put him on the path on being one of the best.

On the other hand, many viewed the actual show as LeBron’s biggest misstep to his legacy and his career. It began the backlash from many fans that some harbor to this day. That being said, it’s not like The Decision was an obviously terrible idea. If we’re being totally honest, as a strict business decision, doing The Decision made sense.

Sure, the loudest critics vehemently hated the idea, but there’s no debate that it was a TV event people were interested in. About 10 million people watched The Decision, so in one aspect, LeBron and business manager Maverick Carter were just giving the people what they wanted to see. Add the fact that the special raised money for the Boys & Girls Clubs of America, and it was a program that helped more people than it hurt.

However, LeBron still came off as narcissistic to some, with accusations of him displaying a selfish attitude throughout the special. It wasn’t so much that James was making his announcement on TV, but that in reality TV fashion, the announcement was delayed for about a half hour before LeBron finally announced he was going to Miami. For fans of the other interested teams, it felt like a slap in the face that LeBron strung them along just to turn them down. For Cleveland fans, it felt that LeBron was dancing on their metaphorical graves on national TV.

What if LeBron never did ‘The Decision?’

It would be easy to say that LeBron wouldn’t be as hated had he not done The Decision, but that takes a simplistic view of how people have viewed the man over the past 11 years.

Conversely, if someone didn’t like LeBron strictly because of The Decision, it’s likely that enough time has passed that they don’t hold those same feelings today. Full disclosure, I hated The Decision at the time and for a while I was rooting against LeBron and the Heat. I thought the show was stupid and unnecessary and it was clearly going to be an hour-long special for an announcement that literally takes five seconds. It’s the same reason why I don’t like the Heisman Trophy show. Because we know they won’t announce the winner until the last few minutes and everything before that is filler.

After a few years, I wondered what the point was for holding this grudge. The show was terrible but was that really worth pinning it all on LeBron when people like Maverick Carter and Jim Gray, along with ESPN, had a role to play. While James shouldn’t escape from the criticism, only hating LeBron for The Decision is losing sight that a lot of other parties contributed to what we saw in 2010.

LeBron himself said multiple times over the years that while he felt joining the Heat was the best move he could make, he would’ve done things a bit differently in how that was announced. Four years later, when he announced he was going back to the Cavs, James instead did an interview with Sports Illustrated.

Thinking outside the box here, if LeBron hadn’t done The Decision, there’s a chance that he may not have been as successful of a businessman. LeBron has been a businessman from the start of his career, but The Decision was one of LeBron’s first forays into being a mainstream star outside of the court. While that didn’t work out as expected, it gave James a chance to review what worked and what didn’t and to learn from his mistakes. The Decision was a learning experience for LeBron and may have improved the chances of success for future business ventures.

While The Decision might be LeBron’s most infamous moment as a professional athlete, there’s a good chance things might’ve been worse for him in the long run had he not had this experience. Those who love LeBron (and who weren’t Cavs fans) were going to love him no matter what. Even Cavs fans eventually grew to forgive LeBron when he came back and Cleveland won a championship. Those who hate LeBron didn’t need The Decision to hate him. They were going to hate him no matter what. Based on that, the immediate fan reaction to The Decision was arguably irrelevant for LeBron’s legacy. And it may have led to some positives for him in both sports and business down the road.