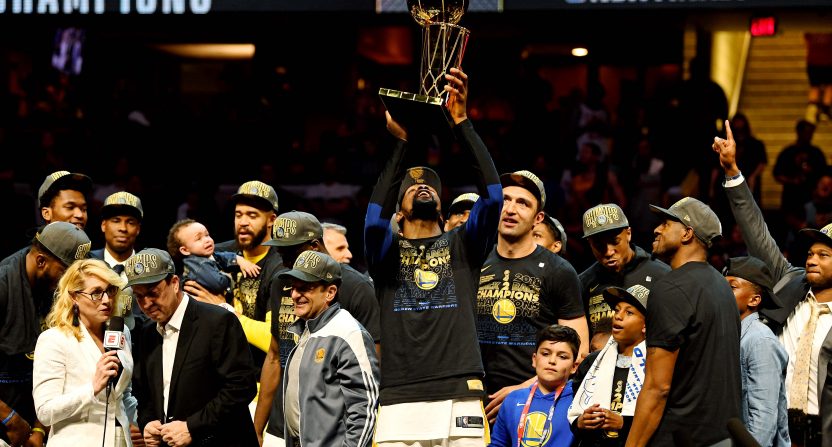 Before the NBA Finals even began, it was anticipated that ratings would be down compared to the last three series contested between the Golden State Warriors and Cleveland Cavaliers.

Never before has the NBA Finals featured the same two teams for four consecutive years and for many reasons, this year’s Finals was the least anticipated of the four. Most importantly, there was the belief that the Cavs didn’t have a legitimate chance after losing in five games last year and trading away Kyrie Irving. Furthermore, eventually there has to be an overall fatigue factor with seeing Warriors-Cavs Part IV. As entertaining as it is to watch LeBron James take on the world, there’s only so much drama that can be built up when the result is mostly a foregone conclusion.

While Game 1 and J.R. Smith’s epic boneheaded blunder gave us some momentary intrigue, it proved to be all too fleeting. Kevin Durant’s heroics in Game 3 eliminated any thought of even a competitive series and the Warriors eventually did sweep the Cavs in the 2018 Finals.

For as much as Warriors-Cavs gave the NBA over the last four years, it’s a bit deflating that what will go down as one of the league’s great all-time rivalries ended with such a whimper. And the same was true in the ratings department.

Friday night’s Game 4 earned 16.2 million viewers, which was the least watched game of any of the 22 games played throughout the Warriors-Cavs Finals series. The previous low was 16.5 million viewers for Game 3 in 2016. To put those numbers in perspective, Game 7 in the 2016 Finals drew almost twice the audience with approximately 31 million viewers.

The NBA had pretty much everything possible working against it in Game 4. The momentum and intrigue surrounding the series was mostly dead, the game was a blowout, and it was taking place on a Friday night. What may be most intriguing about the rating is that the Warriors-Cavs Game 4 performed particularly poorly in the 18-34 demo range. The 4.8 rating in that demographic was the lowest for a Finals game since all the way back in 2007 (!!!), which just so happens to be the last time that a LeBron-led Cavs team was swept in the Finals, that time by the San Antonio Spurs.

It’s unfortunate that this era for the NBA has ended on such a down note with a lightly-watched sweep. At its peak, Warriors-Cavs was the highest the NBA has been since Michael Jordan was playing in the Finals. LeBron is likely to leave Cleveland and head to a team that can actually compete with the Warriors dynasty. ABC/ESPN executives have to be leaning towards James going to an Eastern Conference team so they can build on a fresher and more competitive Finals matchup. If James were to go to Houston or another Western Conference team, the Finals would likely become an afterthought in the eyes of many, at least those outside Boston and Philly.

It’s purely conjecture at this point, but if James were to land in either of those two cities and lead them to the Finals once again, you can bet that Warriors-Sixers or Warriors-Celtics would be a rejuvenating matchup for everyone involved.