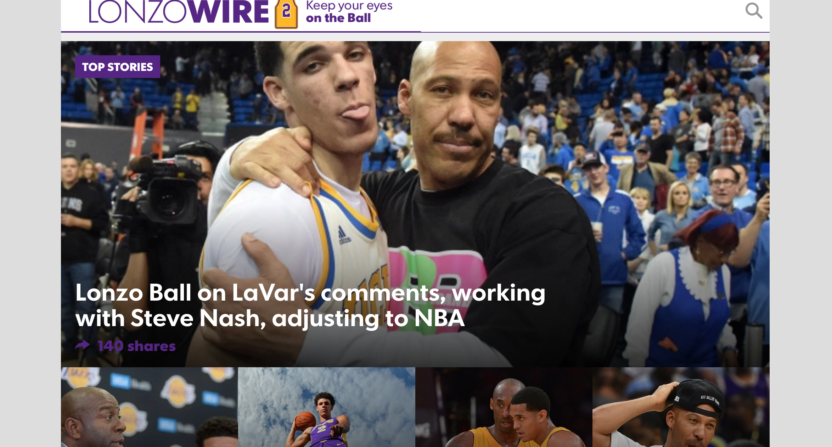 Lonzo Ball is not the best player in the NBA. He may not even be the best rookie. He’s also not the most famous player, the most scandalous, the most popular or the most charismatic.

But he is now the only player in the NBA with an entire website, run by a major media company, built around him.

Last week, USA Today Sports Media Group, which has had success with micro-sites covering each NFL team, launched Lonzo Wire, an online outlet devoted to all things Lonzo. Early content included two posts about Lonzo (and his father, LaVar) appearing on Ellen, two posts about little brother LaMelo’s college basketball eligibility, a post about Lonzo’s “beef” with the rapper Nas and, yes, an analysis of the Lakers point guard’s jump shot. In total, the site published 30 posts over its first seven days, all about Lonzo or his family. In its narrow focus and thorough devotion to a single subject, it’s unlike anything else on the sports internet.

The concept for Lonzo Wire was born when Chris Pirrone, the general manager of USA Today Sports Media Group, Neal Coolong, editor of USA Today’s NFL sites, and others teamed to brainstorm how to expand the company’s constellation of specialty sites. The NFL pages had found an audience, and though Pirrone and Coolong doubted the viability of adding a site for every NBA team, they figured the right subject could galvanize the league’s fans. Their attention shifted to Los Angeles and well…

“The Lakers are a great franchise. But there are a ton of Lakers sites already out there,” Pirrone said in a phone interview. “So to me it was just like, how do we put a little different twist on this? Is there a personality out there that’s strong enough that we can actually cover the sport or the team through a personality?

“We just thought Lonzo was a personality, and given his family, and given it’s the Lakers, that is a franchise that you can build interest around. And there’s probably enough to write about where we can create 3-10 stories a day, depending on what’s going on.”

The Lonzo Wire experiment is predicated on a simple hypothesis: that no matter how much people complain about over-saturation of the Balls, they will keep on clicking. Exactly what kind of content will appear on Lonzo Wire, Pirrone and Coolong say, will depend on what the audience bites at. If readers want more posts about Lonzo the basketball player, Lonzo Wire will deliver them. If readers want more posts about Lonzo the celebrity, that’s what they’re get. And if readers want less Lonzo and more LaVar, LiAngelo and LaMelo, well the customer is never wrong.

For now at least, Lonzo Wire’s content will be produced entirely by Los Angeles-based NBA writer Josh Martin, with HoopsHype editor Alex Kennedy overseeing him. USA Today would not allow Martin to be interviewed for this story (Pirrone said the company didn’t want him to be “distracted”), but in an introductory post he described Lonzo Wire as “a one-stop shop for all things Ball,” writing that, “If it has any connection to the Ball family, you will find it on Lonzo Wire.”

Snarky response to Lonzo Wire is almost inevitable. Many fans view the Balls as Kardashians in high-tops, unworthy of the attention bestowed on them by the debate industrial complex. But digital media is in no position to be picky. If Lonzo and family can drive readers (and thus ad dollars) it’s tough to blame USA Today for writing about them. As Coolong points out, most Lakers content this season will be about Lonzo anyway, just as most Cavs coverage always focuses on LeBron James and most Thunder coverage centers around Russell Westbrook. Lonzo Wire is simply cutting straight to what (many) fans want.

“As the digital side of this business has grown, what I’ve noticed, in the NBA more than anywhere else, is how naturally an individual player can be marketed,” Coolong said. “In the NBA, it not that they aren’t going to root for the Lakers, but they are incredibly excited about Lonzo Ball. My thought was, ‘What would a site look like if all you’re gonna do is cover the player?” Because that’s pretty much all they’re doing anyway.”

Building an entire site around one player, especially an unproven one, carries undeniable risk. What if Lonzo’s season is neither great nor terrible but instead dully average? What if he gets hurt? What if he shies from his celebrity during the season? What if LaVar finally recedes into the background? Lonzo Wire’s success requires Lonzo Ball to continue being interesting. USA Today is banking he will, but that’s no sure thing.

It’s easy to imagine Lonzo Wire carving out an audience among the many Ball-family obsessives. It’s also easy to imagine it shuttering quietly midway through the season when the basketball world finds other things to care about. Either way, Pirrone and Coolong hint that they have more NBA sites in the works. And if their first idea is any indication, they won’t be afraid to get creative.