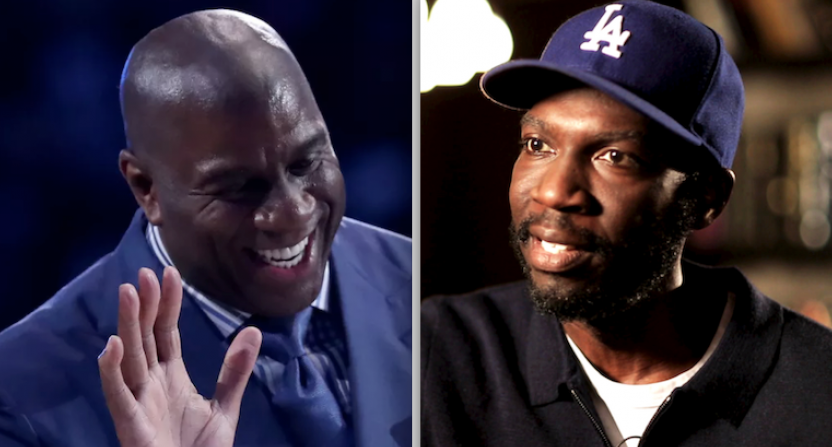 Sports documentaries and long-form docuseries are at the height of popularity, most recently demonstrated by ESPN’s 10-part Michael Jordan series, The Last Dance, winning an Emmy Award.

Shortly after the Jordan film aired, the development of a similar docuseries chronicling the life and career of another NBA legend, Magic Johnson, was announced. And as that project moves forward, a director has signed on for the film.

As reported by Variety, Rick Famuyiwa (The Mandalorian, Dope) will direct the as-yet-untitled Magic docuseries, expected to be completed in 2021. Academy Award-nominated cinematographer Rachel Morrison (Mudbound, Black Panther) is also onboard the project.

The film will reportedly be built around archival footage of Johnson’s Hall of Fame career, which includes five NBA championships with the Los Angeles Lakers, three Most Valuable Player awards, 12 All-Star appearances, and a college basketball national title. Interviews with Johnson, his teammates, family, and business associates will also be featured. But the ability to conduct those interviews will surely be influenced by COVID-19 restrictions and concerns and could affect whether or not the docuseries airs next year (and on which outlet).

“After the success of Michael Jordan’s documentary,” Johnson explained to CBS This Morning‘s Gayle King, “everybody started calling me and said, ‘Listen, you got a story too!'”

Famuyiwa was most recently behind the camera for two episodes of the Disney+ Star Wars series, The Mandalorian. But he’s directed several feature films including The Wood, Brown Sugar, and Confirmation (an HBO film about the Clarence Thomas Supreme Court hearings and Anita Hill testifying that she’d been sexually harassed by the judge).

“Rick, who I’ve known for a long time, excellent director,” said Johnson. “I wanted to make sure I had an African American who understood me and grew up watching the Lakers. So he had a sense of me already. I had a sense of him already.”

Famuyiwa’s most acclaimed film is 2015’s Dope, which follows three Los Angeles teenagers pursued by drug dealers while unwittingly carrying a stash of ecstasy after a gang shootout. The energy, humor, and fast-paced storytelling of the movie raised Famuyiwa’s profile and at one point, he was attached to direct superhero film The Flash for Warner Bros. He left the project due to creative differences with producers five months after signing on.

“As a kid who grew up in Inglewood, California during the Showtime era, I’m so happy to help bring the story of Earvin ‘Magic’ Johnson to the screen,” said Famuyiwa said in a statement, per Variety.

“This project is a convergence of so many things that excite and interest me as a filmmaker. Magic has lived an extraordinary life as a champion athlete, passionate activist, and highly successful entrepreneur. The impact of Magic’s life on the game of basketball and beyond is undeniable. I look forward to working with our talented creative team to bring this documentary to life.”